The marathon criminal trial which for the past year has embroiled two former ministers of the Crown, Eddie Obeid and Ian Macdonald, has finally come to an end.

Justice Elizabeth Fullerton, who has been hearing the case without a jury, thanked all the parties for the “considerable work” in the year-long trial in which 38 witnesses appeared and more than 6000 pages of exhibits were tendered. 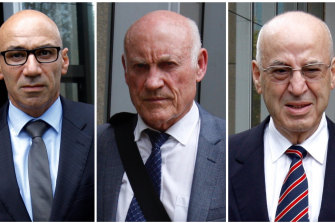 Almost 13 years have elapsed since Obeid snr, 77, his middle son Moses, 51, and Ian Macdonald are alleged to have conspired for Macdonald to conduct himself over the granting of a coal exploration licence which eventually led to a $30 million windfall for the family.

In her closing submissions, prosecutor Sophie Callan, SC, said there was an “overwhelming circumstantial case” which should satisfy the judge that the three men were guilty.

She said Macdonald committed eight acts of misconduct in public office through his actions in establishing and granting an exploration licence over the Obeids’ family property near Mount Penny in the Bylong Valley.

However, Moses Obeid’s barrister Maurice Neil, QC, said the Crown’s case was an “affront to justice”.

Referring to the lengthy trial, Mr Neil said “the volume of evidence is not the test, it’s the quality and the capacity of the evidence to prove the offence. We say it fails.”

Macdonald’s barrister Jonathan Martin submitted that “the inescapable conclusion” was that his client was not part of any conspiracy with the Obeids and instead was acting in the best interests of the people of NSW in opening up areas for exploration.

Eddie Obeid’s barrister April Francis suggested there was such a “paucity of facts” in the Crown case against her client that the judge could not be satisfied of his guilt.

The fact that both former ministers have had previous bouts of incarceration was referred to in passing when Justice Fullerton addressed changes to the accuseds’ bail conditions.

This was a reference to Obeid’s three-year jail term for his previous conviction for misconduct in public office over his family’s café leases at Circular Quay.

The judge referred to Macdonald having certain bail conditions relating to his forthcoming retrial with former union boss John Maitland.

Macdonald had spent 18 months of a seven-year jail term when he was freed in February 2019 after an appeal court found that the trial judge had “misdirected” the jurors about the state of mind needed to be found guilty of wilful misconduct in public office. The trial related to the granting of a mining exploration licence at Doyles Creek in the Hunter Valley. No date for the re-trial has been set.

With regard to the current trial, Justice Fullerton gave no indication as to when her verdict might be delivered.