A war medal lost by a soldier at a beach in Melbourne’s south-east in 1925 has been returned to the man’s descendants almost a century later in the lead-up to Anzac Day.

The British Victory medal was owned by Private Robert Stanley Gordon Smith, who served in France during the First World War, and was lost on Chelsea beach in 1925. 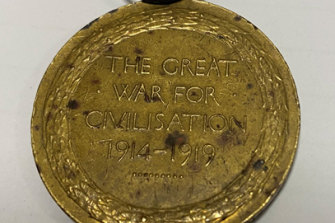 In 1980, this WW1 British Victory medal was located at Beaumaris beach.Credit:Victoria Police

It was found by a man at Beaumaris Beach, about 12 kilometres north, in 1980.

The man who found the medal died but his widow and her second husband became members of the Upwey Belgrave RSL where they met Sergeant Vaughan Atherton from Lilydale police station, a former army reservist for nine years.

Intrigued by the story of the medal found on Beaumaris beach, Sergeant Atherton began to search for its owner.

It had the inscription Private RSG Smith of the 5th Battalion AIF (Australian Imperial Force), and using the National Archives, Sergeant Atherton tracked down the man’s details and discovered that Private Smith had been born in Fitzroy in 1891. 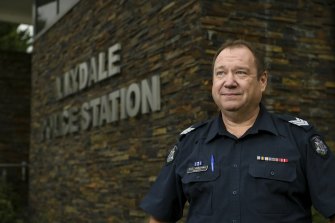 He enlisted at Broadmeadows on the August 7, 1915 and formed part of the 13th Reinforcements, 5th Battalion AIF and served in France where he was wounded in action twice.

He returned to Australia and married Ada Grace Nicholl. He died in April, 1963 and is buried at the Coburg Cemetery.

In his service record is a statutory declaration where he requests the replacement of his “badge” which he lost at Chelsea beach in 1925.

Almost 100 years after it went missing, the medal was returned to two of Private Smith’s descendants this week by Sergeant Atherton.

Sergeant Atherton, who has also recently reunited another family with WW2 medals stolen more than 50 years ago, said it always brought him pleasure to return the items.

“They are irreplaceable and are normally handed down through families as a reminder of the sacrifices and service made by our earlier generations,” he said.

“I am glad that I have been successful on this occasion in reuniting the medal with the recipient’s relatives”.

Private Smith’s nephew Alan Norster said he was overjoyed to receive the medal.

“I am delighted to have been given the opportunity to have this medal put on display at Upwey-Belgrave RSL museum,” he said.

“I am sure Private Smith’s medal will be treasured by all present and future RSL members.”