Why Joe Biden’s inauguration will be like no other

Washington: Joe Biden’s inauguration ceremony next Thursday (AEDT) was already going to be a dramatically scaled-back affair because of coronavirus concerns. The deadly assault on the Capitol Building last week, and fears of further violence in Washington, have only added to the complexities of staging what is usually a packed and pomp-filled event.

Democratic congressman James Clyburn, a close ally of Biden, has said that he expects 75 to 80 per cent of the event will be held virtually. 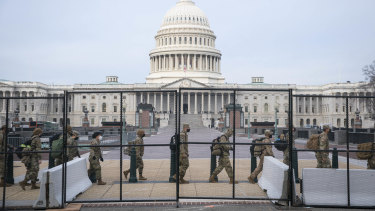 A two metre fence has been erected around the US Capitol ahead of Joe Biden’s inauguration. Credit:Bloomberg

"If anybody saw the Democratic convention [in August] I think you saw a bit of what you will see for the inauguration," Clyburn told CNN recently.

Tickets to the swearing-in ceremony have been limited to members of the Senate and House of Representatives, who will be allowed to bring one guest each.

That’s a crowd of around 1,000 people – way down on the 200,000 who would usually attend. In the past, members of Congress have distributed hundreds of tickets to their constituents.

Viewing stands near the White House that would usually allow the public to watch the parade have been dismantled to discourage crowds and most of the lavish inaugural balls have been cancelled.

"We know that inaugural balls and public parades are part of the inaugural tradition," Biden’s inauguration committee said in a statement."However, given the current public health situation across the country, inaugural activities will have a limited footprint and events like the parade will be re-imagined." 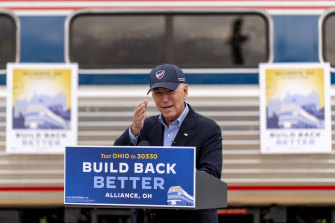 Joe Biden, a noted train fan, will ride the Amtrak train to his inauguration. Credit:AP

After taking the oath of office, Biden will conduct a traditional review of military troops and receive an official escort, with representatives from every branch of the military, before arriving at the White House.

Donald Trump will not attend the inauguration, making it the first time since 1869 that an outgoing president has declined to show up. Recent reports suggest he's less enthusiastic about announcing a run for the presidency in 2024 on that day than he had been.

Vice-President Mike Pence has said he plans to attend. Former presidents Barack Obama, Bill Clinton and George W Bush will attend and participate in a wreath-laying ceremony with Biden at Arlington Cemetery after the inauguration. The Carters, now both in their 90s, have sent their apologies; they will be staying home in Georgia.

Following the storming of the Capitol, there was some speculation that Biden may take the oath of office inside, but he rejected that suggestion this week.

"I am not afraid to take the oath outside," Biden said on Tuesday (AEDT).

Biden's inaugural committee has not yet announced who will perform at the event and whether they will appear in-person or virtually. Aretha Franklin, Beyoncé and Kelly Clarkson were among the artists who performed at Barack Obama’s two inauguration ceremonies.

The law-enforcement presence in Washington has already been noticeably ramped up since the assault on the Capitol. Over 6000 National Guard troops have been deployed to Washington and a 2.1 metre fence has been erected around the Capitol, where the swearing-in takes place.

Even so, members of Congress remain concerned about a repeat of last week's chaos.

The FBI is also worried that violence could erupt at state capitols across the US, after receiving credible reports of plans for protests in all 50 states. Any such violence could pull focus from Biden's moment, even if the threat is not in DC.

Federal authorities arrested a Chicago man on Wednesday (AEDT) and accused him of threatening to commit violence at the inauguration.

Louis Capriotti, 45, allegedly said in a voice mail message for a member of Congress: "We will surround the [expletive] White House and we will kill any [expletive] Democrat that steps on the [expletive] lawn."

After a briefing by security officials, House Democrats released a statement saying they had "grave concerns about ongoing and violent threats to our democracy".

"It is clear that more must be done to preempt, penetrate, and prevent deadly and seditious assaults by domestic violent extremists in the days ahead," they said.

Understand the election result and its aftermath with expert analysis from US correspondent Matthew Knott. Sign up to The Sydney Morning Herald‘s newsletter here, The Age‘s here, Brisbane Times‘ here and WAtoday‘s here.

Related posts:
The Truth About Bridgerton’s Elaborate Hairstyles
Do Prince William and Kate Middleton Really Need Their 20-Room Kensington Palace Apartment?
Popular News
As legendary icon Gemma Collins turns 40, we round up the reasons we love the diva, from A to Z
28/01/2021
Man Utd wonderkid Ramon Calliste, called ‘the next Giggs’, now owns luxury watch business and makes £5m a year – The Sun
26/03/2020
Megan Thee Stallion Addresses Criticism Over Twerking: ‘I Love to Shake My A**’
26/03/2020
Police guard shops to stop coronavirus panic-buyers and enforce social distancing – The Sun
26/03/2020
Coronavirus: Good Morning Britain’s Dr Hilary reveals ‘game-changing’ self-testing kit
26/03/2020
Recent Posts
This website uses cookies to improve your user experience and to provide you with advertisements that are relevant to your interests. By continuing to browse the site you are agreeing to our use of cookies.Ok