Why is Boris Johnson threatening to 'tear up' Brexit divorce terms?

Brexit trade talks on the brink: What is the Withdrawal Agreement, why is Boris Johnson threatening to ‘tear up’ the terms of the UK’s divorce from the EU and why is Brussels so angry about it?

Brexit trade talks were on the verge of collapse today after Boris Johnson threatened to rewrite the terms of the UK’s split from the European Union.

The UK Government is pushing through legislation that could effectively override the Withdrawal Agreement which was thrashed out with the bloc at the end of last year.

Mr Johnson has vowed he will ‘not back down’ but his actions have sparked fury in Brussels.

The laws will unilaterally resolve crucial issues in the Northern Ireland border protocol and ministers say that the changes are essential to avoid ‘confusion’ if there is no trade deal agreed by the end of the transition period in December.

However, Brussels insists that under the divorce deal those details can only be finalised by a joint committee, made up of people from both Britain and the EU.

Below is a breakdown of what the row is about and why it has erupted now. 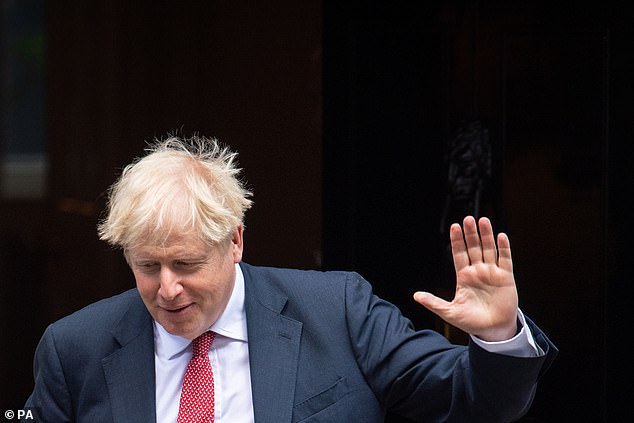 What happens next in the Brexit process?

The UK formally left the EU on January 31 this year.

However, the two sides moved seamlessly into a status quo transition period lasting until December 31.

This time was set aside to allow Brussels and Britain to hammer out the terms of their future relationship.

Trade talks started in March and the eighth round of formal negotiations is due to get underway in London tomorrow.

However, talks are at a standstill amid disagreements on fishing rights and whether the UK will sign up to Brussels’ rules and regulations.

Downing Street has said it does not want talks to drag into the autumn while the EU wants a deal done by the of October in order to give member states enough time to ratify it before the end of the transition period.

Given the time constraints and the lack of progress being made both sides now view a deal by the end of the year as unlikely.

What was actually agreed in the Withdrawal Agreement?

The Withdrawal Agreement is the name given to the divorce deal done between the UK and the EU.

The treatment of Northern Ireland was the most difficult element of the painstakingly-negotiated divorce accord, because of the ties with the Republic – which is staying in the EU.

The final pact keeps the province technically within the UK’s customs territory, but all EU procedures will apply to goods arriving there. Any customs checks on the island of Ireland will be done in ports.

For goods crossing from Great Britain to Northern Ireland that are deemed to be staying there, no EU tariff will apply.

No EU tariffs would be paid on personal goods carried by travellers across the Irish frontier and for a second category of exempted goods that are for use in Northern Ireland, and are not at risk of entering the single market.

So what’s the problem now?

An EU-UK body called the Joint Committee is meant to be defining this second group of ‘no risk’ goods more precisely.

There was also a grey area between the demand that all exports from NI to Britain would require an ‘exit summary declaration’, even though the document guaranteed ‘unfettered access’ within the UK market.

There were provisions to protect EU state aid rules – and the government now fears that British firms more broadly might be caught by them.

However, while UK officials insist that process is continuing smoothly, the clock is running down on the end of the transition period.

The hope was that many of the potential problems would be rendered moot by a wider trade pact.

That has been looking increasingly unlikely with the two sides deadlocked over fishing rights, state aid and level playing field provisions.

What is the UK proposing to do now that has caused all the fuss?

The Government argues that legislation is needed to avoid ‘confusion’ in case the detailed implementation of the NI protocol is not resolved by December 31.

Otherwise, they say, the integrity of the UK and the Peace Process might be put at risk – something that was explicitly stated in the Agreement should not happen.

The Internal Markets Bill, and later the Finance Bill, will therefore describe the types of goods that should be classed as ‘at risk’, and make clear state aid rules do not apply to wider UK businesses.

Ministers will also be able unilaterally to ditch the exit summaries, something that would fit with Mr Johnson’s previous insistence that such paperwork could be ‘thrown in the bin’.

The UK’s action will almost certainly not be accepted by the EU, which will regard it as circumventing the joint committee and as a breach of the Withdrawal Agreement.

The legislative plans have emerged on the eve of a round of trade talks that ministers describe as a ‘moment of reckoning’.

The timing does not appear to be coincidental, as there is plenty of time to fast-track such measures through Parliament before the end of the year.

They could be designed to heap pressure on Brussels to make concessions, and demonstrate that Mr Johnson is not bluffing.

Others suspect that the Government is trying to provoke the collapse of the negotiations so it can make a cleaner break from the EU and blame Brussels for the failure – something that would please Eurosceptic Tories.

However, other cynics might speculate that Mr Johnson’s toughest talk on Brexit previously came just before he compromised.

Related posts:
How celebs like Amanda Holden & Heidi Klum have made lockdown housework sexy by gardening topless & cleaning in bikinis
'Big Brother' Stars Zach Rance and Christine Varner Are Now on OnlyFans
Popular News
James Bond: No Time To Die KEEPS release date as fans urge bosses to delay film
24/09/2020
Man Utd wonderkid Ramon Calliste, called ‘the next Giggs’, now owns luxury watch business and makes £5m a year – The Sun
26/03/2020
Megan Thee Stallion Addresses Criticism Over Twerking: ‘I Love to Shake My A**’
26/03/2020
Police guard shops to stop coronavirus panic-buyers and enforce social distancing – The Sun
26/03/2020
Coronavirus: Good Morning Britain’s Dr Hilary reveals ‘game-changing’ self-testing kit
26/03/2020
Recent Posts
This website uses cookies to improve your user experience and to provide you with advertisements that are relevant to your interests. By continuing to browse the site you are agreeing to our use of cookies.Ok