The World Health Organisation today warned of a continent-wide third wave of coronavirus in Africa.

Infections have increased by 20 percent in the last two weeks compared to the previous fortnight, and cases are surging in 14 countries in the last seven days – eight countries have seen spikes of more than 30 percent.

South Africa alone had a more than 60 percent rise in new cases last week as the country continued to face delays in its effort to roll out the single-dose Johnson & Johnson vaccine. 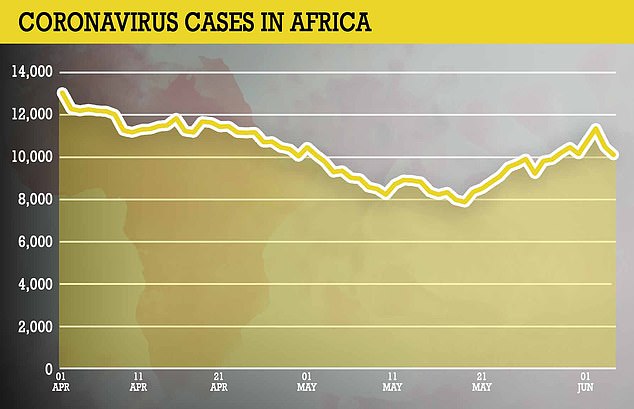 Infections have increased by 20 percent in the last two weeks compared to the previous fortnight, and cases are surging in 14 countries in the last seven days – eight countries have seen spikes of more than 30 percent 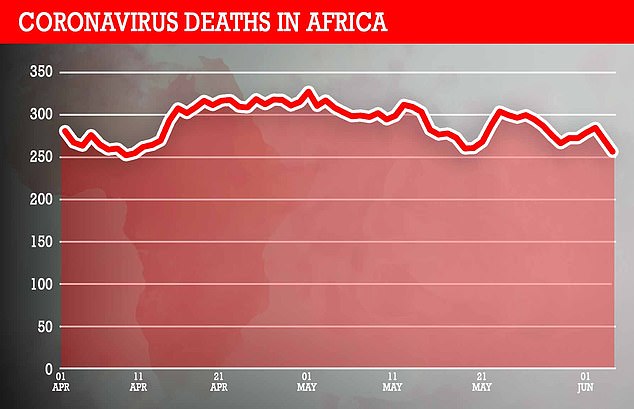 AFRICAN COUNTRIES REPORTING THE MOST CASES AND DEATHS

But the numbers belie the true extent of the virus throughout the continent which lacks the advanced health infrastructure and testing capacity of the developed world.

The WHO says the problem is compounded by a lack of vaccine doses with almost 20 African countries having used up more than two-thirds of their jabs.

Just two percent of Africans have received at least one dose of a vaccine, compared to 24 percent of people globally.

Africa has been hit by a halt in vaccine exports from India which were due to make up a significant portion of the first phase of the COVAX (vaccine-sharing scheme) roll-out.

As a result, many recipients including health workers will not receive their second dose of the AstraZeneca shot within the recommended 12-week interval.

‘The second dose gap is a huge issue,’ WHO senior adviser Bruce Aylward told a UN briefing on Friday.

‘We are working hard with AstraZeneca and with our scheduling and we are about to reschedule about 16 million doses to try and cover those second doses’ to be shipped out in late June and early July, he said.

Dr Matshidiso Moeti, the WHO director for Africa, said at a separate virtual summit today: ‘The threat of a third wave in Africa is real and rising. Our priority is clear – it’s crucial that we swiftly get vaccines into the arms of Africans at high risk of falling seriously ill and dying of COVID-19.

‘While many countries outside Africa have now vaccinated their high-priority groups and are able to even consider vaccinating their children, African countries are unable to even follow up with second doses for high-risk groups.

‘I’m urging countries that have reached a significant vaccination coverage to release doses and keep the most vulnerable Africans out of critical care.’ 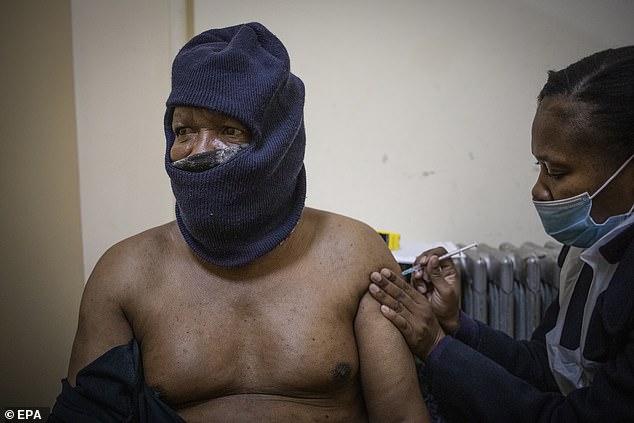 An elderly man receives a shot of the vaccine in Hillbrow, Johannesburg, on Thursday

A WHO survey of 23 African countries in May found that most have fewer than one intensive care bed per 100,000 and would buckle under any surge in hospitalisations.

This compares to around 25 ICU beds per 100,000 people in developed countries like the United States.

‘Many African hospitals and clinics are still far from ready to cope with a huge rise in critically-ill patients. We must better equip our hospitals and medical staff to avert the worst effects of a runaway surge,’ Dr Moeti added.

‘Treatment is the last line of defence against this virus and we cannot let it be breached,’ he said.