Home » World News » ‘We had some fun in the trenches this morning’: Gallipoli love letters reveal lighter moments of war

‘We had some fun in the trenches this morning’: Gallipoli love letters reveal lighter moments of war

Some 160 love letters discovered after more than a century in a tin under a house shed new light on what conditions were like for Australians in the trenches at Gallipoli and on the Western Front during the First World War.

Like everyone else, cabinet maker Idris Charles Pike (known as Charlie) aged 19 from Leichhardt and his 20-year-old ‘sweetheart’ Violet Clapson had no idea whether he would be coming home. So he kept the romance alive by writing letters to Violet in Granville, sending postcards and mementos from wherever war took him. 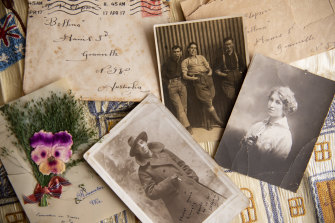 “We had some fun in the trenches this morning.” It’s not a phrase normally associated with the Gallipoli campaign. In a letter dated September 18, 1915 Pike wrote: “As you know only a few yards separates us from the Turks so we threw some tinned beef and jam over to them, they soon raked them into their trenches and in return they threw tobacco and cigarette papers.” 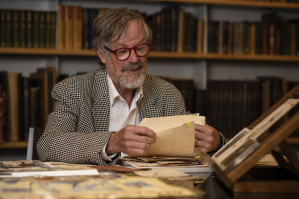 A note came back from the Turks written in French saying: “Our friends and enemy, we received your preserved meat…would be pleased if you could send souvenir, and we will do the same, could you spare a good knife we would be pleased.” 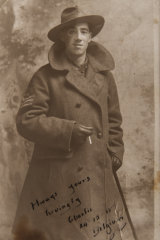 A portrait of Idris Charles Pike with monocle, cigarette and greatcoat.

The bonhomie didn’t last too long and after throwing over a knife, Pike adds: “We finished up with a message saying that we were going to end the armistice in a quarter of an hour by throwing a bomb and after that it was on as usual.”

Only a week earlier he wrote to say: “My dearest Violet, I am now in the trenches and have been over here three weeks. At times here it is a perfect hell … shells falling like hail in a storm and the smell of the dead Turks is something to be remembered…

“In my spare time which is very limited I always think of you and home and at least have five minutes gaze on your photo. I have it on my testament – you know the one I mean … first one you ever gave me. You would find a great difference in me now, I am not the same and easy Charlie you used to know. I look on the serious side of life more so and have learned more in the time I have been away than I would have done in fifty years otherwise.”

From “Somewhere in France” on April 26, 1916 he writes of seeing six Allied aircraft in the sky. “The Germans had their machine guns on them but didn’t do any damage, my word, our airmen are fine men, they seem to be absolutely fearless, leastways they don’t seem to be much afraid of Fritz.”

Pike survived the war and returned home to marry Violet and they had two children. He did however die aged 53. He suffered anxiety as well as respiratory problems, possibly caused by being gassed. 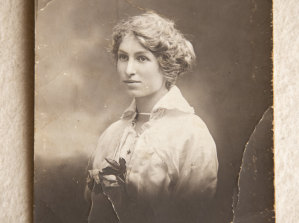 ‘Sweetheart’ Violet Clapson to whom Idris Charles Pike wrote during four years of service in WW1.

Mr Pike’s grandson, Idris Murphy, 71, said he found the letters under his mother’s house in Woolooware when he was clearing the property out to be sold. “I was gobsmacked,” he said. “My mother told me at one stage there was a letter from Gallipoli and she was about to read it one day but was interrupted and never did. Then I found the 160 letters from grandad that my mother had kept, unbeknownst to anybody.

“The letters are all one way, with none from Violet. Whether she decided they were too personal at some stage, they were certainly love letters. Not only the letters but some of the paraphernalia that was sent to her were was pretty intimate.”

Mr Murphy, a contemporary figurative landscape painter, has travelled in an art group to Gallipoli to paint at the location where his grandfather wrote to Violet. The letters have now been donated to the State Library of NSW and will be digitised to make them widely available. 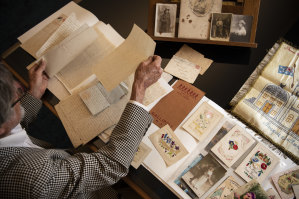 Senior curator Elise Edmonds said the young couple’s love was clearly evident throughout the material. “He is always writing ‘I love you so much and miss you so much’,” she said. “It’s an example of how war has interrupted their lives but it is also lovely because we know he comes home and a year after he returns to Sydney they are married.”