Democrats began their impeachment case against Trump Tuesday afternoon with a video of profanity and violence during the January 6 MAGA attack on the Capitol.

The more than 14-minute video presented at the top of the Democrats’ case for conviction included snappy cuts between the violence of the pro-Trump mob and the former president’s speech just beforehand.

The Democrats went for the gut punch, using their opening argument to remind senators of what happened the day of the riot, the confusion, fear and brute force that was in play as lawmakers fled from the mass of Trump supporters. 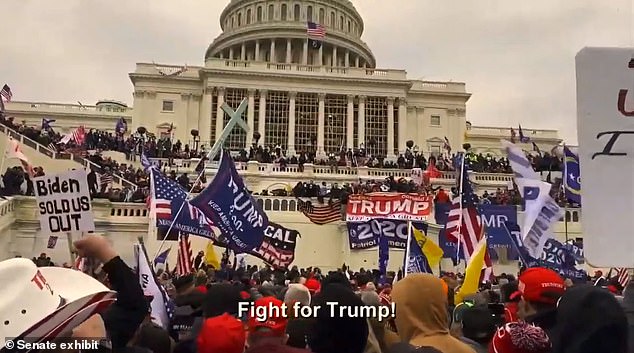 Scene of violence: The Democrats’ video made the case that the mob was sent to the Capitol by Trump to stop the process of democracy

The video showed highlights from the insurrection, including Trump urging his supporters to ‘fight like hell’ at a rally outside the White House that morning. It also showed the violence and destruction the rioters inflicted as they fought their way through police lines and breached the building.

Lead Impeachment manager Jamie Raskin began the Democrats’ case with an impassioned speech on the constitutionality of the impeachment trial and ending with an emotional personal story of the riot and how it affected him. At times he held back tears as he recounted what happened on January 6.

And it wasn’t just about him, he told a captive Senate audience, which sat in silence listening to him.

”This trial is personal for every senator and for every member of the House, for every manager and all our staff and the capital police and the Washington DC metropolitan police and the National Guard and maintenance and custodial crews and the print journalists and TV people who were here,’ Raskin said.

The former president’s defense team claimed the video showing was part of the left turning the proceedings into a ‘bloodsport’ for some of Trump’s biggest critics.

‘We now learn that the House managers in their wisdom have hired a movie company and a large law firm to create, manufacture and splice for you a package designed by experts to chill and horrify you and our fellow Americans,’ Trump’s defense lawyer David Schoen decried from the Senate floor.

He added: ‘They don’t need to show you movies to show you that the riot happened here. We will stipulate that it happened, and you know all about it. This is a process fueled irresponsibly by base hatred by these House managers.’

The defense team also presented their own video more than an hour-and-a-half into their two-hours of argument.Their video included dramatic, dark music with clips of Democrats preemptively saying they would call to impeach Trump starting just days into his presidency. This included a 2019 clip of Representative Rashida Tlaib, just after becoming a congresswoman, saying, ‘We’re going to impeach the motherf***er.’