‘Has he been fighting a cat?’ Viewers are distracted by strands of hair falling onto Boris Johnson’s shoulders as he announces lockdown changes

Eagle-eyed TV viewers claim Boris Johnson is ‘losing his hair’ after spotting several strands on the PM’s shoulders when he addressed the Commons today.

The Prime Minister told MPs earlier today that ‘deaths are already rising’ and the ‘the weeks and months ahead will continue to be difficult and will test the mettle of this country’.

He then returned to television screens this evening to plunge millions of Britons deeper into coronavirus lockdown in his live Downing Street briefing.

While many viewers took to social media to share their shock at the worrying news, others commented on the PM’s apparent hair loss – a symptom linked with Covid-19. 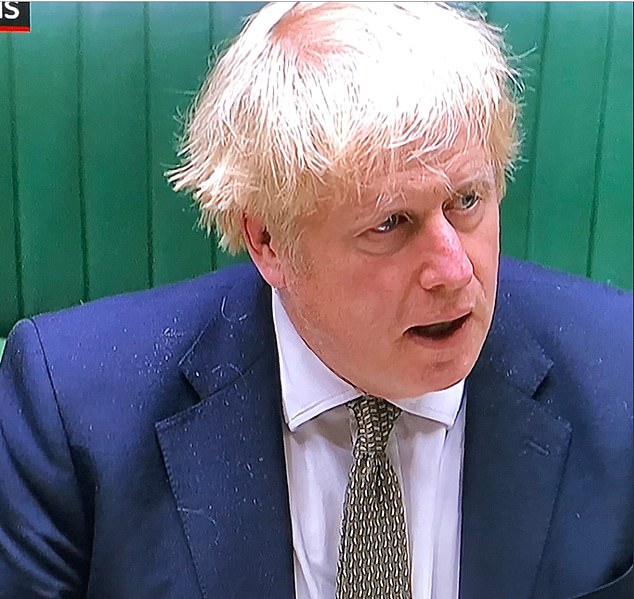 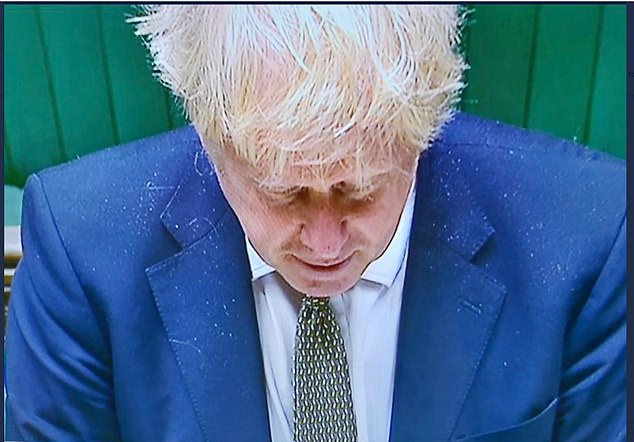 The PM was admitted to hospital in April after testing positive for coronavirus and he spent three nights in intensive care.

Berrio wrote on Twitter: ‘Boris’s hair falling out now. What’s next?’ while Marc Burrows asked: ‘Is Boris losing his hair?’

Michael Ball added:  ‘Is Boris’s hair falling out or has he let his dog sit on his jacket?’

Another Twitter user wrote: ‘Looked very much like Boris Johnson is losing his hair in parliament earlier today.

‘Jacket was covered in hair. Its a side effect of Covid. Many suffer along with memory issues and brain fog. 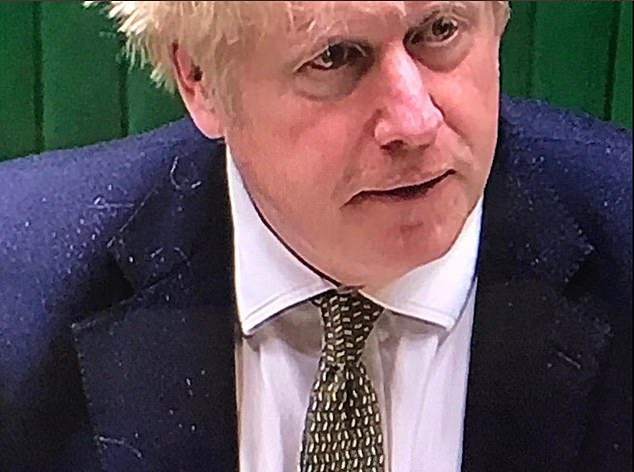 ‘Considering these issues Covid can cause, are the likes of Johnson and Trump fit to govern?’

In August, a leading clinic reported a link between Covid-19 and hair loss after survivors complained the disease caused their locks to fall out in clumps.

Specialists at the Belgravia Centre in London said they began noticing an uplift in cases of telogen effluvium (TE) – a shedding condition caused by a disturbance in the hair growth cycle – in patients who battled coronavirus.

TE – which sees a high percentage of anagen follicles (follicles which are actively growing hair) go into their resting phase prematurely across the scalp – typically follows a stressful event and is triggered two to four months after, often causing alarm to sufferers.

Other viewers took a lighter take on the PM’s appearance.

Gavin Hepworth said: ‘Has Boris had a fight with a cat before addressing the nation?Jacket covered in hair and who knows what else.’

Another viewer wrote: ‘You’d think Boris Johnson would have at least brushed his hair before addressing the nation over a deadly virus.’

Others asked why no-one noticed the hair before he began his address.

Sukky Choongh wrote: ‘You know Boris’s staff don’t like him! I would never let my boss go on stage with even one stray hair on his collar! 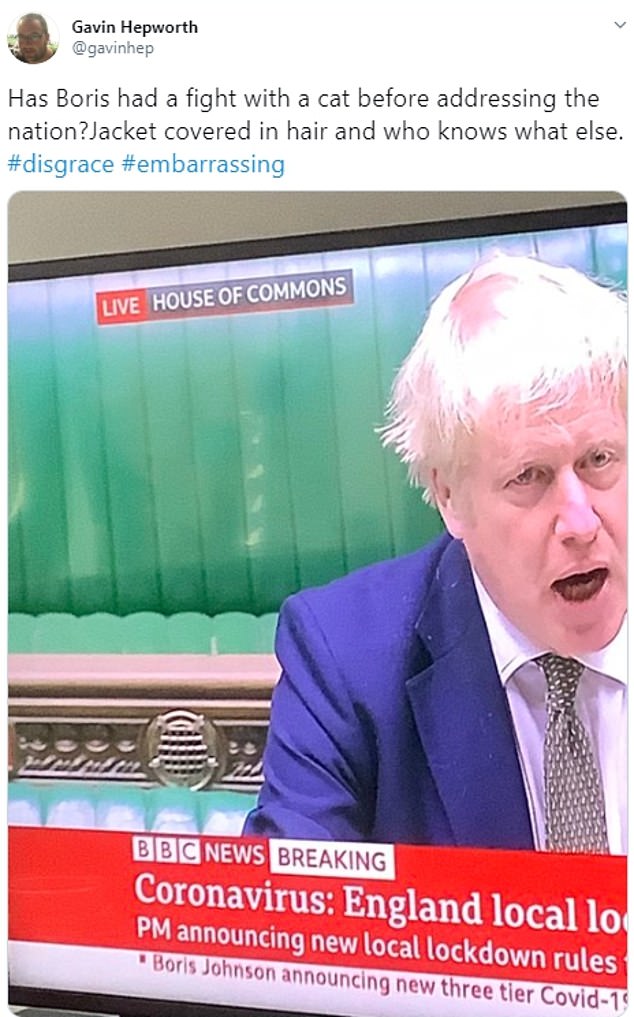 Other viewers took a lighter take on the PM’s appearance. Gavin Hepworth said: ‘Has Boris had a fight with a cat before addressing the nation?Jacket covered in hair and who knows what else’ 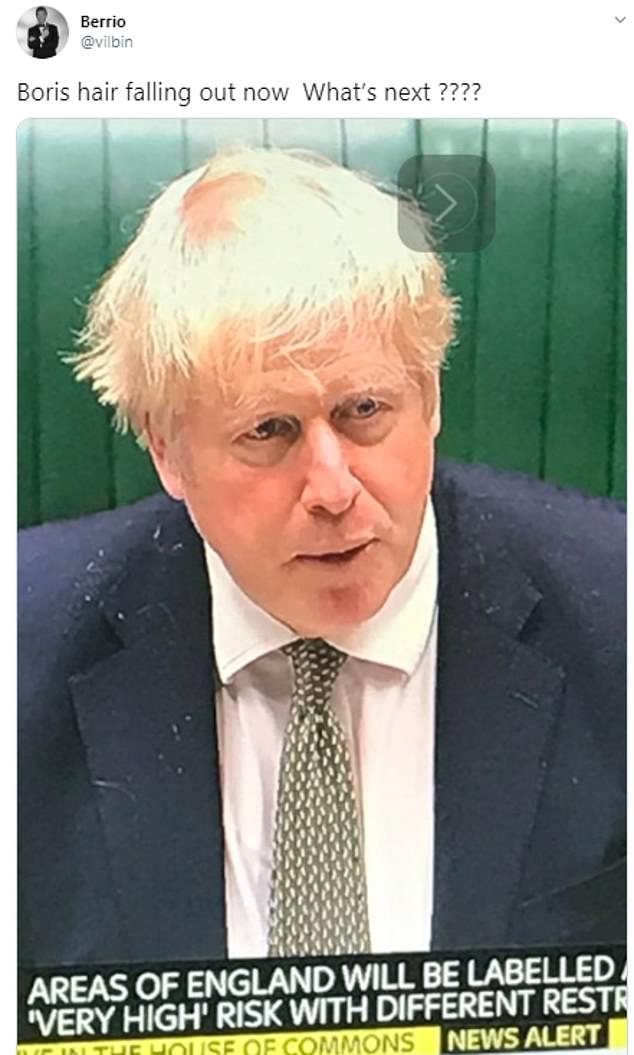 Someone else asked: ‘Does no one “check him” before he speaks in the chamber?’

In his briefing tonight, Boris Johnson warned that the UK cannot ignore the ‘flashing warnings’ about surging coronavirus cases as he plunged millions of people deeper into lockdown. 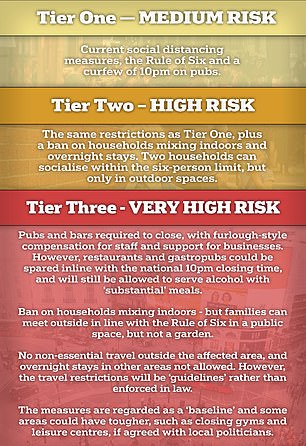 Unveiling his new ‘Three Tier’ system, the PM declared that Liverpool will be the first area to face the highest restrictions – meaning pubs being shut and households banned from mixing altogether indoors or in gardens.

However, there was anger as another swathe of the country is being thrown into the Tier Two bracket, with bars allowed to stay open but households barred from mixing indoors. Many of the locations already have similar curbs, but others – such as Manchester and the West Midlands – will see a tightening.

Confusingly some other places will have their rules loosened, as the arrangements are ‘streamlined’.

Insisting he had no choice about acting as the UK racked up another 13,972 Covid cases today – up 11 per cent on last Monday – Mr Johnson said the other options were to ‘let the virus rip’ or ‘shatter’ the economy. Liverpool’s case rate per 100,000 population has risen by 14.3 per cent over the past week to 609.

At a No10 press conference alongside Chancellor Rishi Sunak and chief medical officer Chris Whitty this evening, Mr Johnson said: ‘The figures are flashing at us like dashboard warnings in a passenger jet and we must act now.’

He added: No one least of all me wants to impose these kinds of restrictions, erosions of our personal liberty, but I’m convinced as I’ve ever been that the British people have the resolve to beat this virus and that together we will do just that.’

However, Prof Whitty risked undermining the PM’s delicately calibrated message by cautioning that the ‘professional view’ was that basic measures in Tier Three ‘will not be sufficient’ to control the virus. He urged local leaders to use the ‘space’ in the rules to beef up the restrictions.

More than 17million people are covered by the two higher risk tiers in the government’s new system, with the rest of England under the Rule of Six and 10pm curfew on bars and restaurants.

From Wednesday at 5pm, people in Tier Three Liverpool will only be allowed out of the area for essential travel such as for work, education or health, and must return before the end of the day – although the rules will be guidance rather than legally enforced. They cannot mix with other households in gardens, but can in outdoor public spaces subject to the Rule of Six. 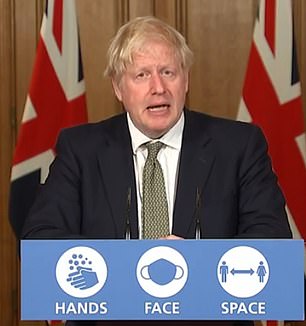 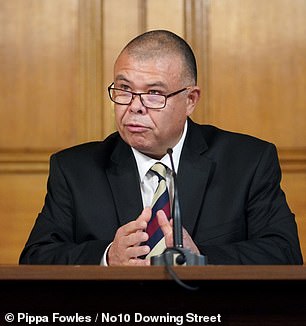 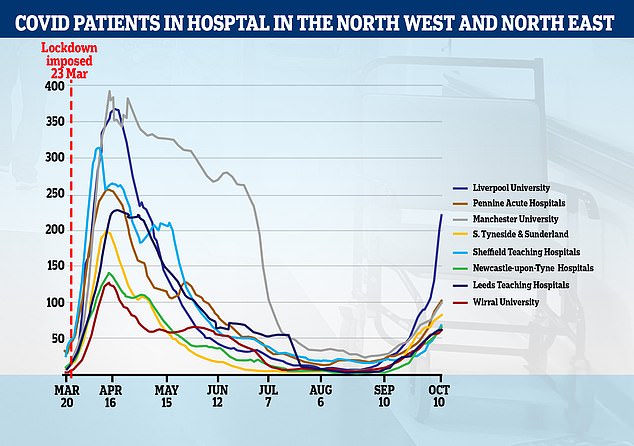 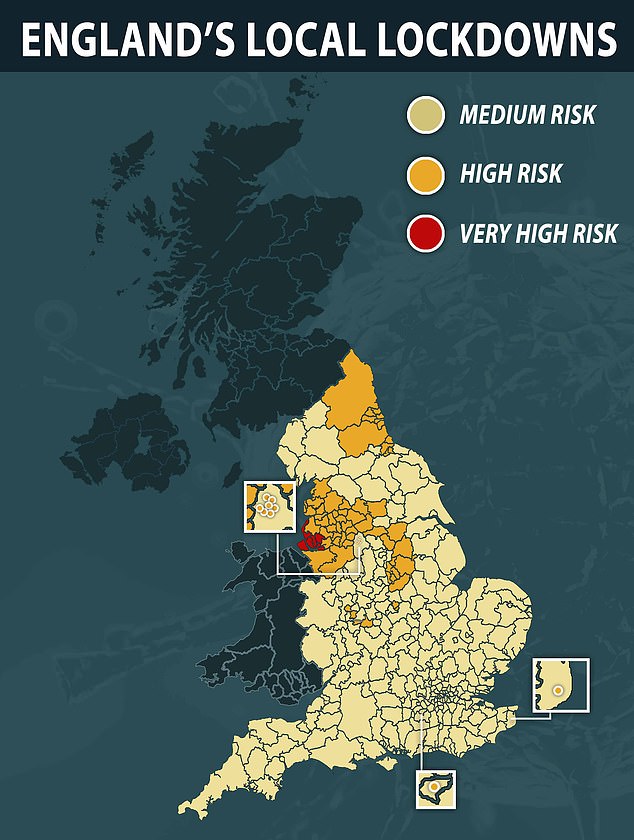 More than 17million people are covered by the two higher risk tiers in the government’s new system, with the rest of England under the Rule of Six and 10pm curfew on bars and restaurants

Restaurants will be allowed to open, but only in line with the national curfew, and can serve alcohol as long as someone is having a ‘substantial’ meal, according to No10. Sources insisted that could not merely be a snak like a packet of crisps.

Where businesses are forced to shut, the Government will pay two thirds of each employee’s salary, up to a maximum of £2,100 a month. There is expected to be a £28million package to help parts of the country classed as Tier Three, with Mr Johnson saying the total support on offer would be around £1billion.

Liverpool is the only area in the top bracket so far, and the city is going further than the basic restrictions by closing leisure centres, gyms, betting shops and casinos. Mr Johnson hinted that other hotspots were resisting, swiping that failing to agree to crackdowns would be ‘unforgivable’.

Tier Two includes Greater Manchester, which was saved from the highest curbs after frantic lobbying from mayor Andy Burnham and local MPs, as well as the North East, the West Midlands, Nottingham and Leicester.

London is not expected to be in Tier Two immediately, but spokeswoman for Sadiq Khan warned that could happen ‘this week’ after a conference call with borough leaders. Londoners should understand that this could change very quickly – potentially even this week.

Some places, such as Oldham and Warrington, will actually see their restrictions loosened, as households cannot currently mix in gardens. No10 has promised that a full breakdown of restrictions across England will be released later.

Related posts:
Lucas Bravo’s Response To Negative ‘Emily In Paris’ Reviews Sees 2 Sides To The Argument
'General Hospital': Sofia Mattsson's Favorite Pandemic Dish Is Related to a Popular Disney Film
Popular News
Netflix’s Army of the Dead Will Get Prequel & Anime Series
22/10/2020
Man Utd wonderkid Ramon Calliste, called ‘the next Giggs’, now owns luxury watch business and makes £5m a year – The Sun
26/03/2020
Megan Thee Stallion Addresses Criticism Over Twerking: ‘I Love to Shake My A**’
26/03/2020
Police guard shops to stop coronavirus panic-buyers and enforce social distancing – The Sun
26/03/2020
Coronavirus: Good Morning Britain’s Dr Hilary reveals ‘game-changing’ self-testing kit
26/03/2020
Recent Posts
This website uses cookies to improve your user experience and to provide you with advertisements that are relevant to your interests. By continuing to browse the site you are agreeing to our use of cookies.Ok