Naples: The health crisis in Italy's third largest city Naples is out of control, Foreign Minister Luigi Di Maio said, after a video was posted on social media showing a corpse sprawled in a hospital bathroom.

The unidentified man was a suspected coronavirus sufferer who had been waiting for a test in a packed, squalid hospital emergency room, which was also shown in the amateur video. 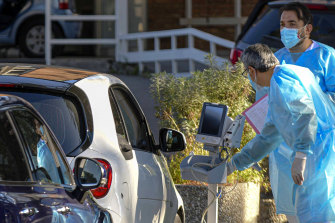 The sick in Naples have been administered oxygen and placed on drips through their car windows.Credit:AP

Health officials said they were investigating the death, but Di Maio said this was just the latest shocking incident he had heard about in recent days from his native Campania region, which is centred on the Mediterranean port city.

"The situation in Naples and in many areas of Campania is out of control. The central government needs to intervene because there is no time left," Di Maio said.

Officials said Campania reflected a wider health calamity playing out across much of Italy's south, which emerged largely unscathed from the initial wave of COVID-19 that mainly battered the north. But it is being hammered by the second wave.

The number of cases nationwide roared past the one million mark this week – with half of those infections emerging in just the last 19 days. The number of deaths totals 42,953 – the sixth highest tally in the world.

Hospitals across the country have struggled to manage the skyrocketing COVID-19 numbers, but the poorer south has appeared particularly ill-equipped to cope despite having all summer to bolster their defences.

The sick in Naples have been administered oxygen and placed on drips through their car windows as they wait for hours for COVID-19 tests or to be admitted to hospital. Further south, on the island of Sicily, the mayor of Palermo warned on Monday his region faced an "inevitable massacre" as infections rose there.

"The north has always had a well-equipped health system spread out across the territory. The situation there might not be optimal, but the south by comparison is a wasteland," Carlo Palermo, head of the ANAAO-ASSOMED doctors' union, told Reuters. 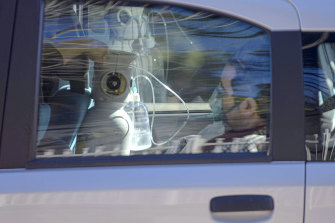 A man is given oxygen in a car parked outside a hospital in Naples.Credit:AP

Signs of hope in Germany, France but virus strains hospitals

The surge of new coronavirus cases appears to be slowing in Germany and France, generating hopes that the two European heavyweights are beginning to regain control over the pandemic. But authorities said on Thursday, local time, that hospitals are crowded and are likely to face further strain in the coming weeks.

Countries across Europe have implemented more or less drastic lockdown measures in recent weeks as they try to tamp down a resurgence of the pandemic, with numbers of confirmed cases hitting records. They have largely overwhelmed contact-tracing efforts even in Germany, which was credited with handling the pandemic's first cases well and is still in better shape than most of its neighbours.

Germany's health minister told his compatriots to brace for a long winter, regardless of whether a partial shutdown succeeds in bringing down the caseload.

"This doesn't mean that things can really get going again everywhere from December or January, and that we can have wedding parties or Christmas celebrations as if nothing were happening – that won't work," Jens Spahn told RBB Inforadio.

"I don't see having events with more than 10 or 15 people this winter."

Germany embarked on November 2 on its four-week "lockdown light". Restaurants, bars, sports and leisure facilities have closed, but schools and shops remain open.

On Thursday, the Robert Koch Institute, Germany's national disease control centre, said 21,866 new cases were recorded in the past 24 hours in the nation of 83 million. That’s short of a record of 23,399 set on Saturday, but nearly 2000 more than a week earlier.

Neighbouring France, which has confirmed more infections since the pandemic started than any other European country, is two weeks into a tougher month-long lockdown that has left most adults confined to their homes for all but one hour a day, although schools remain open.

French Prime Minister Jean Castex was expected to announce later on Thursday that authorities were starting to regain control over the virus.

A doctor who has advised the French government, Antoine Flahault, said on BFM television that "after two weeks of lockdown, we are seeing the epidemic get back under control. We are no longer seeing this exponential curve".

However, doctors warn that hospitals remain crowded and are urging the public to obey lockdown measures. A helicopter was transporting patients on Thursday from saturated hospitals in the Lyon region to the eastern city of Strasbourg.

COVID-related deaths are also still rising, and authorities say more people with the virus have died in French nursing homes so far in November than in the previous five months.

Amid heightened virus fears and the new round of European restrictions, few people are travelling at present. Still, German airline Lufthansa launched a test program that it hopes will ensure health on board and encourage more to fly.

All passengers on a Munich-Hamburg domestic flight on Thursday morning took a so-called antigen test and were only allowed to board after the quick results showed they were negative for the coronavirus. Passengers weren't charged for the test but were told to arrive an hour earlier to allow time for the results.

Lufthansa did not immediately have details on how many passengers were on board the first flight.

Get our Coronavirus Update newsletter for the day’s crucial developments and the numbers you need to know. Sign up to The Sydney Morning Herald’s newsletter here and The Age’s here.

Related posts:
'Mermaid' puppy makes incredible recovery after being thrown from a moving van
NSW proposes new laws to recognise pregnancies lost as result of crime
Popular News
Trump channels Washington, Lincoln in proclaiming Thanksgiving holiday
26/11/2020
Man Utd wonderkid Ramon Calliste, called ‘the next Giggs’, now owns luxury watch business and makes £5m a year – The Sun
26/03/2020
Megan Thee Stallion Addresses Criticism Over Twerking: ‘I Love to Shake My A**’
26/03/2020
Police guard shops to stop coronavirus panic-buyers and enforce social distancing – The Sun
26/03/2020
Coronavirus: Good Morning Britain’s Dr Hilary reveals ‘game-changing’ self-testing kit
26/03/2020
Recent Posts
This website uses cookies to improve your user experience and to provide you with advertisements that are relevant to your interests. By continuing to browse the site you are agreeing to our use of cookies.Ok