Victoria has recorded 11 new local cases of COVID-19 after hundreds of students and staff linked to a high school in Melbourne’s inner north-west were ordered to isolate after a student tested positive for coronavirus.

The department confirmed that cases are all linked to previously reported cases and have not been in quarantine throughout their infectious period.

It comes as hundreds of students and staff linked to Mount Alexander College, a high school in the inner northwestern suburb of Flemington, were ordered to isolate after a student tested positive for coronavirus.

The high school, located close to several high rise public housing towers in Melbourne’s inner north, confirmed the case in a statement to staff and students.

“It is with much regret that I inform you that there is a confirmed COVID case at MAC (Mount Alexander College),” principal Dani Angelico said. 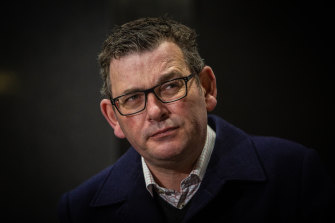 Premier Daniel Andrews says that “zero cases” in total is not the aim. Credit:Scott McNaughton

A farmers market, usually held on the grounds of Mount Alexander College, has been cancelled. Health department testing units were on site until 9.30pm last night urgently testing residents of the towers at 130 Racecourse Road, in Flemington.

Government sources and epidemiologists told The Age that Victoria’s lockdown will almost certainly last for more than seven days because it could take weeks for all people to be in isolation for their infectious period.

Premier Daniel Andrews said Saturday’s 29 recorded cases, the highest daily total since September, made for a “concerning day”. Two senior Victorian government sources, speaking anonymously to make predictions about the outbreak, said it could take weeks for a ring to be put around the clusters.

However, the Premier insisted it was achievable to drive local cases to zero despite the new outbreak penetrating western suburbs communities with greater language barriers, bigger family groups and an increased proportion of essential workers who can’t work from home.

Prominent epidemiologists Nancy Baxter and Catherine Bennett predicted an extended lockdown, with both concerned the new clusters, one centred in Hobsons Bay and the other linked to the city of Maribyrnong, either emerged from chains of transmission that have been running for weeks in Victoria or new NSW incursions.

“This is very, very significant to see this many cases,” Mr Andrews said as he emphasised the safety of the AstraZeneca vaccine and welcomed the Commonwealth’s fast-tracked delivery of 150,000 Pfizer doses to Victoria.

“There is a certainty that there are more cases out there and that’s why you need to get tested when you’ve got any symptoms at all.”

Last month Victoria went into lockdown after 10 new daily cases and 26 active cases, and it took 10 days for all new cases to be in isolation for their period of infectivity.

A public housing tower in Flemington has been locked down after eight members of the same household, one of whom is a student at Al-Taqwa college in Truganina, tested positive.

Of Saturday’s cases, 25 were linked to the Hobsons Bay cluster, of which 17 were linked to the school. Authorities now believe this cluster may have been sparked even earlier in July by relatives of the Al-Taqwa teacher who was originally thought to be the index case.

The family that lives in the Flemington building, which is home to at least 400 people, has been moved to a different location.

Victoria, which will soon allow under-60s to receive AstraZeneca jabs at state hubs, is administering an average of 17,600 jabs per day over the past week compared with 23,300 in NSW. Queensland is tracking at 11,500 per day.