We have made our live blog of the coronavirus pandemic free for all readers. Please consider supporting our journalism with a subscription.

Victoria records no new local cases, one in hotel quarantine

There was one new case recorded in hotel quarantine.

The testing numbers were also good yesterday. There were 28, 267 tests results processed.

Victorians face three vulnerable months with limited supplies of vaccine as experts warn that outbreaks of more infectious variants of COVID-19 could pose a serious problem to the state’s largely unvaccinated population over the winter.

Victoria recorded no new local cases yesterday as the cluster in Sydney almost doubled to 21 cases and acting Premier James Merlino again accused the Commonwealth of a botched vaccine rollout after Monday’s meeting of national cabinet failed to guarantee the increased supply that Victoria had sought.

University of Melbourne epidemiologist Tony Blakely said the decision last week by the Australian Technical Advisory Group on Immunisation (ATAGI) to limit the AstraZeneca vaccine to those over 60 would set back the vaccine rollout by several months, before it ramped up again as more Pfizer and Moderna doses arrived in Australia from overseas later in the year. 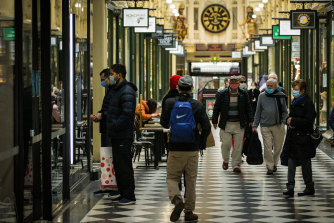 “The problem is that it is winter now and if the more infectious Delta [variant] gets out somewhere it could cause a serious problem,” Professor Blakely said.

Mr Merlino said he did not leave the discussions confident Australia’s vaccine supply would substantially improve to meet demand, telling reporters he was disappointed that in “the depths of winter we’re going to see a reduction in the vaccine”.

In his strongest swipe yet at the federal government, Mr Merlino said the Commonwealth had missed its “sliding doors moment” last year when Australia reportedly failed to take up an offer of 40 million doses of the Pfizer vaccine.

“The fact that so little of our population is fully vaccinated, is a problem,” Mr Merlino said.

Federal Health Department assistant secretary Lisa Schofield rubbished this suggestion on Monday, maintaining that no formal offer was put on the table until later in the year, despite there being an initial meeting between Health Department officials and Pfizer in July 2020.

The travel bubble between New South Wales and New Zealand has burst – for now.

New Zealand’s health department said an Australian travelled from Sydney to Wellington over the weekend before returning to Australia on Monday and testing positive to COVID-19.

“This is the first time an Australian traveller has brought COVID-19 to NZ and since gone home,” NZ’s Ministry of Health said in a statement. 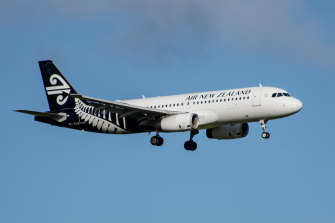 Health authorities say an Australian man flew from Wellington to Sydney on Monday while infectious.Credit:iStock

“Based on the time of their symptom onset and CT [cycle threshold] score it is most likely they contracted the virus in Sydney prior to their visit to New Zealand. Genome sequencing is underway in Australia to see if the case is linked to the current outbreak in Sydney.“

As a result, travel between NSW and New Zealand has been halted for the next few days.

NZ authorities say they have so far identified four close contacts of the Australian traveller. All are isolating as further contact tracing gets underway.

Passengers who also flew on the following flights must immediately isolate at their home or accommodation and call NZ health authorities on 1800 358 5453:

“Australian health authorities will be contacting those on the return flight to Sydney to provide advice about testing and isolation,” NZ’s Ministry of Health said.

The round 15 AFL fixture remains up in the air while both NSW teams were scrambling to Victoria last night as the GWS-Hawthorn game was moved from Sydney to Melbourne in the wake of NSW’s escalating COVID-19 situation.

The uncertainty comes with crowds of 25,000 set to be allowed at games in Melbourne, at both the MCG and Marvel Stadium, this week.

Both Sydney and the Giants arrived in Victoria last night amid fears the Victorian government would tighten its borders with NSW. 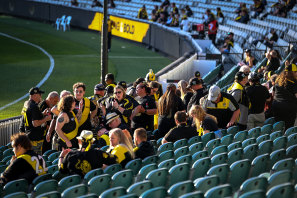 A capped crowd at the MCG earlier this year.Credit:Eddie Jim

The MCG will host Sunday’s Greater Western Sydney-Hawks game, which had initially been scheduled for Giants Stadium. The match will remain in its 1.10pm timeslot. The Giants could stay in Victoria ahead of their round 16 game with Melbourne.

The Swans’ game against Port Adelaide at Adelaide Oval is also volatile, with the match currently scheduled for Saturday night but possibly on the move to Saturday twilight, and potentially moved to Melbourne, pending South Australian health department rulings.

Further changes to the round 15 fixture are possible, with well-placed sources confirming the Collingwood-Fremantle match at Marvel Stadium is a possibility to move to a Saturday afternoon timeslot – instead of Saturday twilight – as part of the reshuffle.

Thursday night’s Brisbane-Geelong game at the Gabba has been pushed back to a 7.30pm start.

Sydney are due to host West Coast in round 16, a match which now shapes as problematic given the WA Government’s hardline border stance.

This means Victorian residents returning from areas such as the City of Sydney will have to obtain a permit and quarantine at home for 14 days.

Non-Victorian residents who have been in a red zone are barred from entering Victoria altogether (unless they obtain an exemption).

The red zones are:

The changes came into effect at 1am today. Victoria’s health department says anyone arriving into the state from those local government areas without a valid travel permit will be fined and have to stay in hotel quarantine.

Meanwhile, Victoria officially declared Wollongong an orange zone in the early hours of the morning. This means anyone entering Victoria from the Wollongong local government area in NSW must obtain a travel permit, isolate upon arrive, get a coronavirus test and stay isolated until they receive a negative result.

Restrictions set to ease across Melbourne

Restrictions imposed during the recent lockdown are set to ease further, with an announcement expected this morning that people will be able to gather outdoors in groups of up to 50 and companies will be allowed to operate with 75 per cent of their workforce in the office.

The COVID-19 rule changes will take Melbourne to settings mirroring those in regional Victoria. Hospitality venues will move to a looser one-per-four-square-metre density limit and a probable cap of about 300 people.

The Victorian government will finalise the plans this morning and detail the easing of public health rules at a press conference later today, government sources have confirmed. 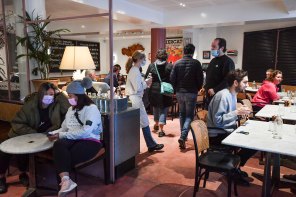 Under the new rules, crowd caps are expected to change. The government is weighing up how many fans it will allow in stadiums, with the A-League grand final and a Saturday night blockbuster between Essendon and Melbourne to be hosted in Melbourne over the weekend. Caps may differ depending on the capacity of the stadium.

The ministers will also assess advice from Victorian Chief Health Officer Professor Brett Sutton on whether to allow more than two people to visit another household. Professor Sutton said yesterday he expected “good news” for those wanting to host weddings this weekend.

Good morning, and welcome to our free, live coverage of the coronavirus crisis.

We’ll bring you all the coronavirus news here as we get it, so check back through the day for the highlights.

As always, keep an eye on the list of exposure sites on the Victorian coronavirus website, and if you have any symptoms – a fever, a sore throat, a cough – you can find a list of testing sites here.

And if you’re over 40 or eligible in other ways, find the information to get your corona jab right here.

I’ll be with you until mid-afternoon.