US could approve Moderna's Covid vaccine 'within hours'

The US could become the first country in the world to approve Moderna’s Covid-19 vaccine today.

Donald Trump sparked confusion after he tweeted the jab had been ‘overwhelmingly approved’ and that distribution would start ‘immediately’.

But the US regulator the Food and Drug Administration (FDA) has yet to confirm the decision. Vice President Mike Pence told reporters today it was likely the jab could be approved ‘within hours’.

The UK is still yet to approve the pharmaceutical firm’s jab, and will not receive any of the seven million doses it has ordered until the spring even if it regulators gave it the green light tomorrow.

Britain’s regulator has already approved the Pfizer vaccine, with 800,000 doses of the shot arriving in the first shipment. As many as 40million doses of the jab have been ordered, with the rest expected to arrive over new years.

The Oxford coronavirus vaccine is also yet to be approved by drug regulators, but its lead researcher Professor Sarah Gilbert today revealed she hoped it’s ‘not too far off’ getting the green light. 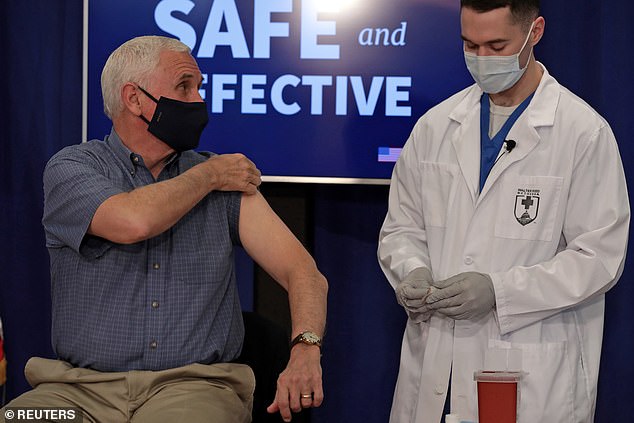 Vice president Mike Pence said today that the Moderna vaccine could be approved in hours. He is pictured above receiving a Covid-19 vaccine live on television today

President Trump tweeted the vaccine had been approved, but this hasn’t been confirmed by the US regulator or officials

Pence – who received his vaccine on live TV this morning – said just after 2pm GMT (9am ET) today that Moderna’s jab could be cleared for use within hours.

The FDA approved the Pfizer coronavirus vaccine earlier this month, which is the same type of jab as Moderna’s, and health bosses have already started administering it to patients.

Claiming the jab had been approved on Twitter, President Trump added: ‘Europe and other parts of the World being hit hard by the China Virus – Germany, France, Spain and Italy, in particular. The vaccines are on their way!!!’

A panel of independent FDA advisers who discussed the vaccine on Thursday said a decision on its emergency use authorisation was expected today.

They said they had endorsed its use with a 20-0 vote, and one abstention, that the vaccine’s benefits outweigh the risks.

The UK’s vaccines taskforce was accused of backing the wrong horse after Moderna’s initial trial results revealed it was 94 per cent effective against the virus – but officials had not purchased any doses.

In a mad scramble they secured five million doses within hours, and then a further two million later in November, but it was announced that none were likely to arrive until the spring because of supply issues.

Britain had initially chosen not to buy the jab over concerns of the lack of a dependable European supply change, according to reports.

Officials also shunned the EU vaccine purchase scheme, which had sought to secure doses of the jab.

Moderna and Pfizer’s vaccines both use mRNA – a genetic code for the virus that gets cells to produce its spike protein which it uses to invade them.

This then triggers an immune response, arming someone with defences to beat off the virus with when they are exposed to the virus in the community.

How does the Moderna vaccine work?

It works in a similar way to the jab from Pfizer/BioNTech.

Coronavirus is studded with “spike proteins” that it uses to enter human cells. Covid-19 vaccines target this spike protein.

The Moderna and Pfizer vaccines use synthetic messenger RNA (mRNA), a genetic material that contains information about the spike protein.

The vaccines provide the body with instructions to produce a small amount of this protein which, once detected by the immune system, leads to a protective antibody response.

Moderna’s vaccine does not require the same ultracold storage as Pfizer’s and can remain stable at normal fridge temperature for 30 days.

How effective is it?

Trials on more than 30,000 people in the US have shown the Moderna jab to be 94.5% effective in preventing coronavirus.

While this efficacy may drop over time, scientists have said the vaccine should protect against around nine in 10 cases of Covid-19.

Moderna has not identified any significant safety concerns.

What about antibodies and T-cells?

The Pfizer, AstraZeneca and Moderna vaccines have been shown to provoke both an antibody and T-cell response.

Antibodies are proteins that bind to the body’s foreign invaders and tell the immune system it needs to take action.

T-cells are a type of white blood cell which hunt down infected cells in the body and destroy them.

Nearly all effective vaccines induce both.

When will the Moderna vaccine arrive in the UK?

The Government has signed a deal for seven million doses of the Moderna vaccine for the UK.

That is enough for around 3.5 million people, who will each receive two doses.

According to the Government, Moderna is scaling up its European supply chain which means these doses would become available in the UK in the spring at the earliest.

The UK’s Medicines and Healthcare products Regulatory Agency (MHRA) has been conducting a rolling review of the vaccine.

Can this vaccine help the elderly?

There have been concerns that a Covid-19 vaccine will not work as well on elderly people, much like the annual flu jab.

However, data from Moderna suggests the jab works across all age groups, including the elderly.

The Pfizer jab has also been shown to work effectively in the elderly.

Related posts:
Elvis loved Christmas at Graceland but never played his own songs, says Priscilla Presley
Meet the Surfer, 23, Who Lost Part of His Leg and One Lung to an Infection — and Then Got COVID
Popular News
James L. Brooks Remembers Cloris Leachman: ‘She Made Outrageousness Lovable’
28/01/2021
Man Utd wonderkid Ramon Calliste, called ‘the next Giggs’, now owns luxury watch business and makes £5m a year – The Sun
26/03/2020
Megan Thee Stallion Addresses Criticism Over Twerking: ‘I Love to Shake My A**’
26/03/2020
Police guard shops to stop coronavirus panic-buyers and enforce social distancing – The Sun
26/03/2020
Coronavirus: Good Morning Britain’s Dr Hilary reveals ‘game-changing’ self-testing kit
26/03/2020
Recent Posts
This website uses cookies to improve your user experience and to provide you with advertisements that are relevant to your interests. By continuing to browse the site you are agreeing to our use of cookies.Ok