Two million fewer trips to the supermarket after masks made compulsory

Shoppers made two million fewer trips to the supermarket than expected in the week after face masks became compulsory inside stores, figures reveal

Two million fewer supermarket visits were made than expected after face coverings became compulsory in shops, analysis has revealed.

Footfall in stores and grocers has been steadily climbing since the peak of the pandemic, with each household currently averaging 14 trips per month.

But the mandating of masks disrupted this upward trend in the last week of July and stopped hundreds of thousands from going to the shops.

Charlotte Scott, consumer insight director at Kantar, which carried out the research, said: ‘The number of supermarket trips was two million lower than would have usually been expected in the week after the rule was adopted, and currently just over half of shoppers say they feel safe in stores.

‘That suggests the public may need time to adjust to the new regulations, and they now have to plan ahead for every shopping trip.’

Grappling with fears of a second spike as they continued to unlock sections of the economy, ministers made face coverings compulsory in shops on July 24. 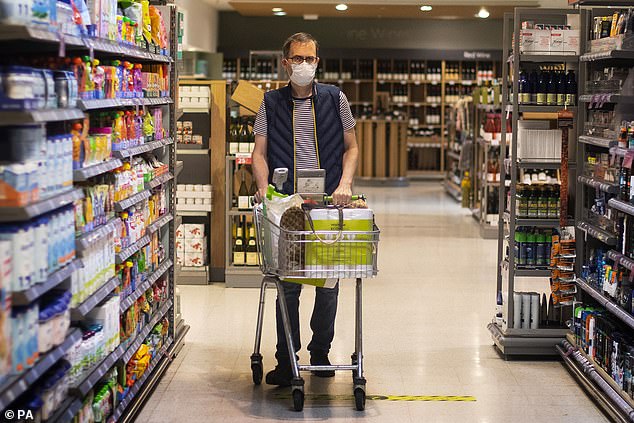 Two million fewer supermarket visits were made than expected after face coverings were made compulsory in shops, analysis has revealed (shopper wearing a mask in Waitrose in July)

Kantar also found that of the Big Four, Morrisons pulled in the most customers in the 12 weeks to August 9, followed by Tesco, Sainsbury’s and Asda.

And shoppers are spending less on each trip they make to supermarkets, buying £9.7billion worth of goods over the past four weeks, the lowest level since February.

Ms Scott said: ‘The relaxing of rules across much of the country means shoppers are less inclined to stock up their cupboards with regular large trips.

‘That has seen average spend drop below £25 for the first time since March. However, at £24, it is still a world away from the pre-Covid average of £19 per trip.’

Shopping trends are shifting towards healthier options, with sales of vitamins and minerals up 34 per cent, herbal teas up by 19 per cent, and nuts up 21 per cent, although this was offset by alcohol sales rising 28.3 per cent over the past four weeks.

Online food shopping hit another new record in the four weeks to August 9, with 13.5 per cent of all sales now ordered online, Kantar said.

Ocado has been the biggest winner with growth of 45.5 per cent over the 12-week period, although it still only accounts for 1.8 per cent of the entire grocery sector. 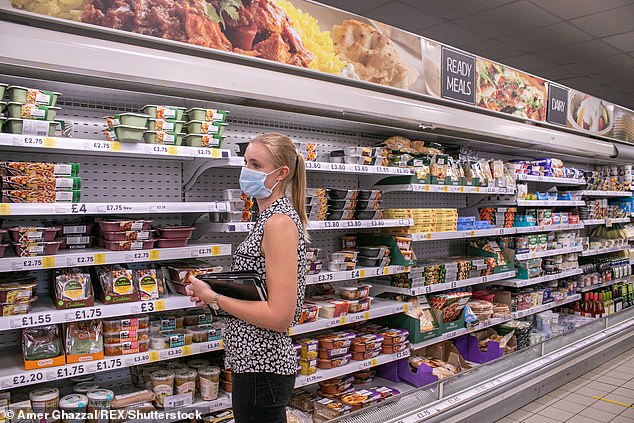 Ms Scott added: ‘With the country officially entering recession last week, atypical behaviours are likely to continue. During a recession we would generally expect shoppers to manage their spend more carefully.

‘Early evidence suggests that most are not yet choosing to trade down, with brands and premium own-label lines currently performing well; however, price cuts have increased compared with July as some people look for opportunities to save.’

She also suggested the exclusion of alcohol from the Government’s Eat Out To Help Out scheme, to encourage consumers back into restaurants, helped keep in-store sales up during the period.

Morrisons was the fastest-growing Big Four retailer, with sales up 16.0 per cent, driven by a particularly strong performance from its supermarket stores – accounting for 10.2 per cent of the market.

Elsewhere, Iceland was the second fastest-growing retailer at 29.2 per cent, with its share increasing to 2.4 per cent.

Co-op increased its share to 7.1 per cent, with growth of 22.4 per cent. Lidl remained steady at 5.9 per cent, while Aldi and Waitrose both lost 0.2 percentage points, taking them to 7.9 per cent and 4.7 per cent respectively.