Moment rescue workers pull two dogs from a massive, 65-foot deep sinkhole that is still growing and has nearly swallowed a home in Mexico

Two dogs were pulled out of a massive, 65-feet deep sinkhole in the east-central Mexican state of Puebla that has nearly swallowed a house and left officials scrambling to determine what caused it and how to fix it.

The sinkhole opened up the afternoon of May 29 at a farm in Santa María Zacatepec. It was initially 15 feet wide before ballooning to 413 feet wide.

Video footage showed a rescue worker pulling Spay, the pitbull, to the ground before a neighborhood stray dog, identified as Spike, was also brought to safety.

The pooches were subsequently placed under the care of a team of veterinarians who treated them at the scene. 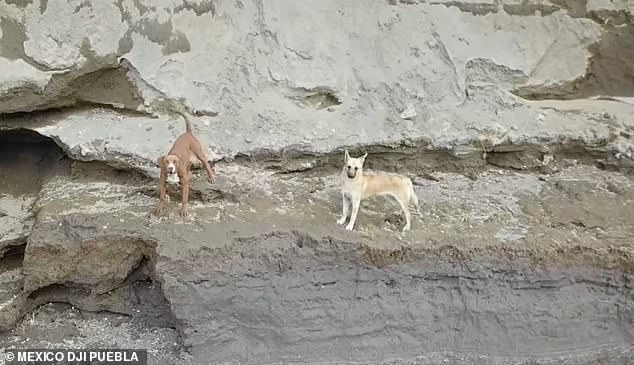 Spay (left) and Spike (right) were rescued Thursday after spending three days trapped inside a sinkhole that opened behind a farm house in Puebla, Mexico, on May 29 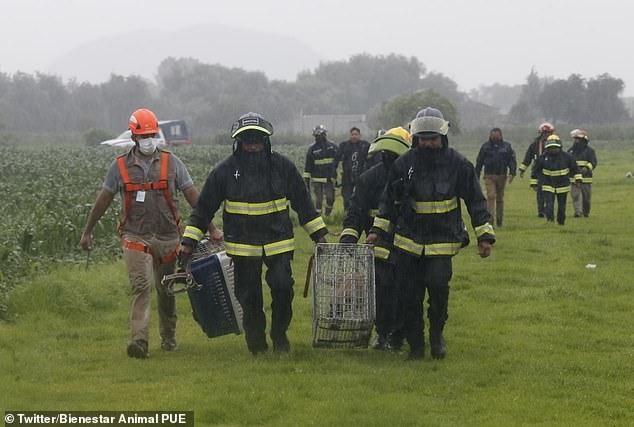 Firefighters carry a cage with one of the two dogs that were rescued in Puebla, Mexico, on Thursday evening. The dogs were playing outside a home Monday evening before they accidentally fell into a sinkhole that had opened up May 29 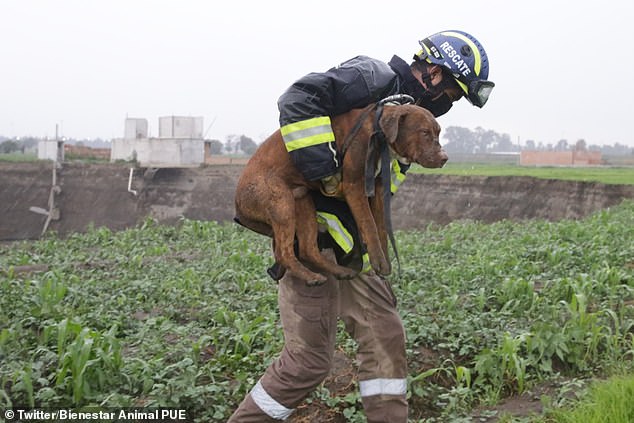 A firefighter carries Spay, a pitbull who was playing with a stray dog outside his neighbors home in the Puebla city of Juan C. Bonilla before falling into a 65-foot deep crater 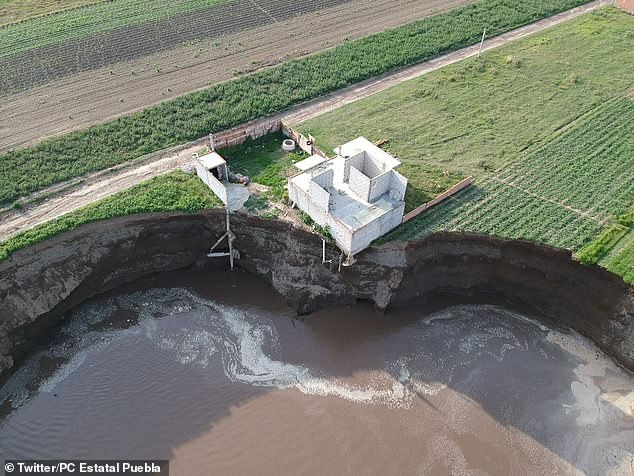 Aerial view of a sinkhole that opened up on a farm in Puebla, Mexico, on May 29

Fátima Ortega told newspaper El Universal that Spay, who is eight months old, and Spike were playing outside her home Monday night before they took off running. Her sister saw the dogs into the crater and alerted her.

Civil Defense workers stationed near the sinkhole told Ortega that they were unable to do anything because they did not want to risk their lives.

‘They told us that a human’s life was worth more than a dog’s and they couldn’t do anything,’ she said. 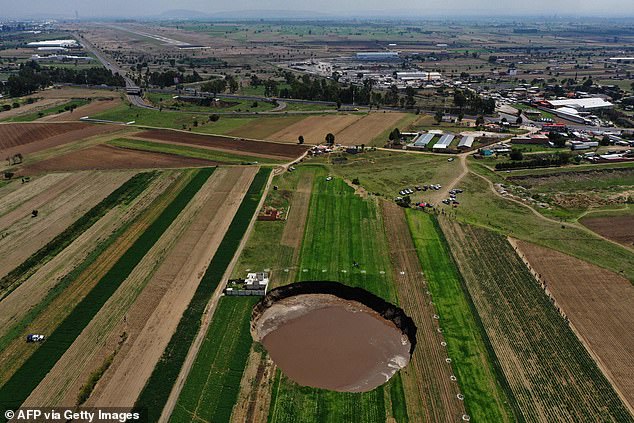 The sinkhole appeared in a field in Santa Maria Zacatepec, state of Puebla, Mexico, on Saturday

Ortega approached the Civil Defense on Tuesday to seek an update on a possible rescue, but was turned away.

Aerial footage captured by a drone showed Spay and Spike pacing along the edge of the crater Wednesday afternoon, which drew the attention of Governor Barbosa Huerta.

During a press conference Thursday morning, Barbosa Huerta was not too sure about sending down rescue workers on a helicopter or scaling down the side of the crater on a rope, fearing that they would have to rescue a human being and two dogs. 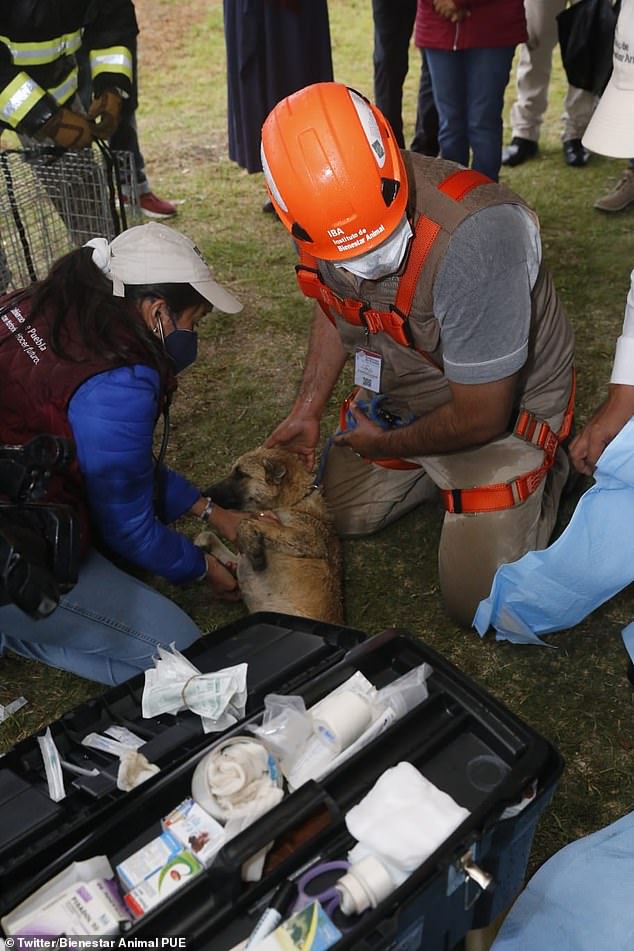 Veterinarian provide treatment to Spike, a stray dog who accidentally fell into a 65-foot deep sinkhole on Monday. The dog and a pitbull he was playing with were rescued Thursday 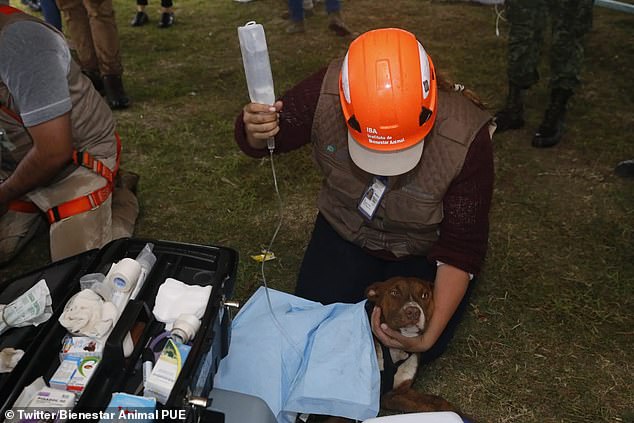 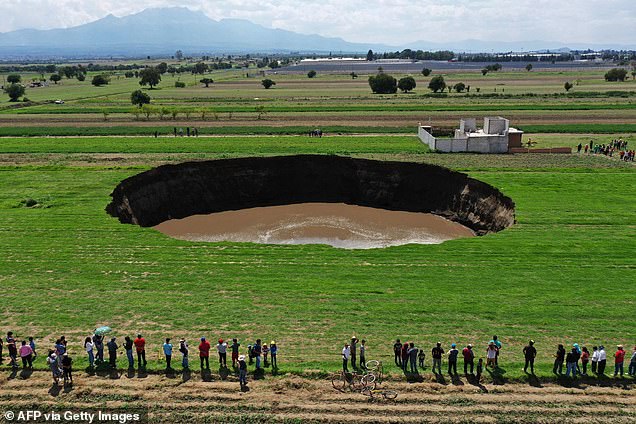 However, a firefighter descended into the pit, in part by using a ladder to steady the soil on the edge. His colleagues were seen standing farther back using ropes and a pulley system to haul up cages carrying the two dogs.

‘It’s a very hard time for us. It hurts, because this is all that we have,’ said Magdalena Xalamigua Xopillacle, whose brick and cinderblock house was slowly collapsing into the sinkhole. ‘At times we feel sick from so much sadness.’ 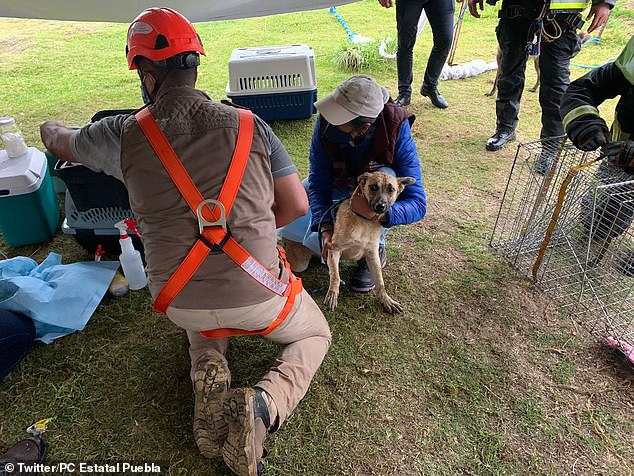 Spike receives medical treatment from vets at a farm in Mexico where a sinkhole opened up May 29. Spike is one of the two dogs who since Monday were trapped in the crater before being pulled to safety Thursday night 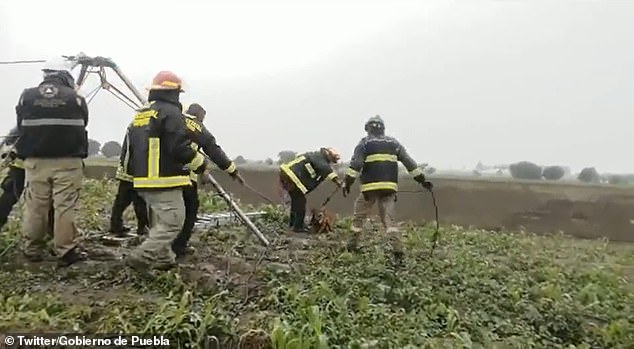 A firefighter secures Spay moments after he was taken out of a cage near the edge of a massive sinkhole in Puebla, Mexico 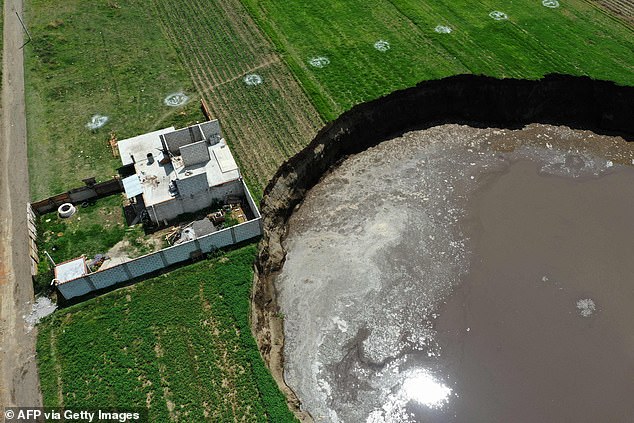 Aerial view of a sinkhole that was found by farmers in a field of crops in Santa Maria Zacatepec, state of Puebla, Mexico on June 1

Some residents believe the sinkhole is the result of excessive ground water extraction by factories or a water bottling plant in the area.

But the bottom of the hole is filled with water that appears to have strong currents, and the national civil defense office said experts think it was caused by something like an underground river.

‘It is highly probable that the origin is associated with the presence of subterranean water flows,’ the office said.

Barbosa said experts are studying both possibilities, and if water extraction is the culprit, he would cancel any permits.

Citing a risk of further ground fractures, the office warned people to stay away from the site.

‘This is not a tourist attraction, or a place to visit with your family,’ the office said Wednesday.

Authorities have set up metal barriers and police tape to keep onlookers out, and has restricted flying drones over it.

Sinkholes are created by erosion and the drainage of water

A sinkhole is a hole in the ground created by erosion and the drainage of water.

They can range in size from a few feet in diameter to the size capable of swallowing entire buildings.

They are a natural phenomenon but the process is often amplified by human processes and interference.

There are two basic types of sinkhole which are separated by how they form.

Slow developing ones are known as a cover-subsidence sinkhole and those that appear suddenly are called a cover-collapse sinkhole.

The sudden holes which seize headlines are the latter and can cause devastation and even death.

Often, it involves soluble rock, such as limestone, becoming moist and eroding rapidly.

This then leads to a swift loss of land and a sinkhole emerges.