Twins separated in cruel experiment reveal how they found each other

Identical twins separated at birth in a cruel experiment have spoken for the first time about how they found each other after a chance encounter at a pancake restaurant.

Melanie Mertzel had no idea she had a long-lost sister.

Suddenly, at age 23, she found herself looking at someone she never knew existed – someone with exactly the same eyes, voice and laugh as her – her twin, Ellen Carbone.

A bizarre coincidence brought the pair together after decades apart, raised by different families in New York City.

Melanie was working at her parents’ restaurant, International House of Pancakes in Brooklyn, when a woman approached her, behaving oddly.

‘She saw me and couldn’t understand why I didn’t recognise her,’ Melanie told 60 Minutes Australia.

A week later the woman was back, carrying a photo of her niece, Ellen. 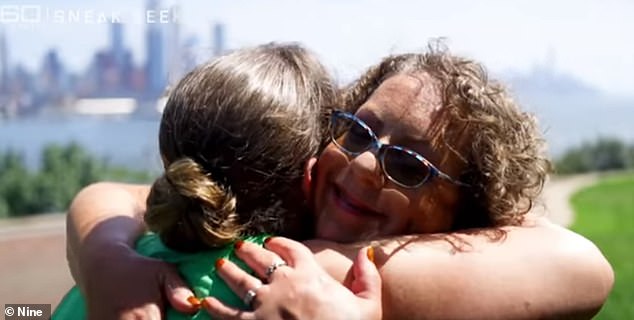 Ellen Carbone (left) hugs twin sister Melanie Mertzel (right). The pair found each other after being separated at birth then studied in a cruel experiment

She showed the picture to Melanie’s boyfriend.

‘That’s you,’ he told Melanie.

‘That IS you,’ he insisted.

Intrigued, she spoke to the woman, who gave her Ellen’s phone number.

When Melanie rang, she was blown away by how their voices and laughs sounded exactly the same. 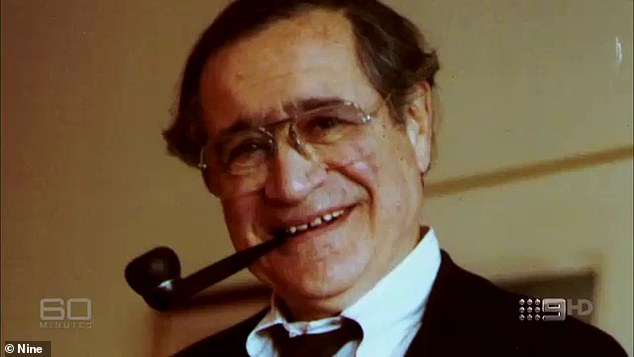 Psychiatrist Peter Neubauer began the study in the 1960s that would track the separated twins and triplets to see if life’s outcomes are due to nature or nurture. The adoption agency already separated twins to give each baby more maternal attention, Psychology Today reported

They compared everything they liked and disliked, and found out they were mirror twins with Melanie left-handed and Ellen right handed.

The two soon met up and Ellen was so nervous she threw up.

Ellen had always wanted an identical twin – she had dreamed of it and wanted it  – and now it was an instant reality.

‘I was very, very shy as a child, and I clung to my mother – like I would hold onto her leg, like when we went out anywhere,’ she said. 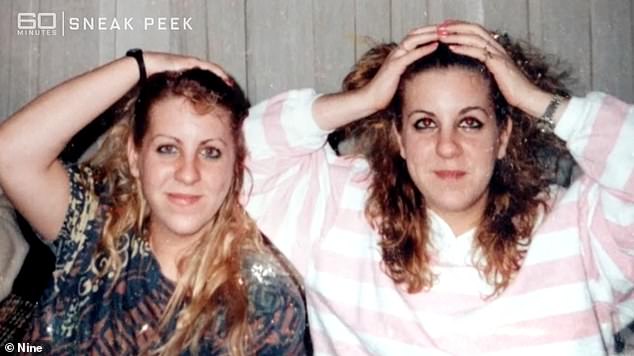 Elen and Melanie were blown away when they met up but because they were living further apart with their partners, they felt they never could recapture a lost childhood of bonding

‘And I feel like that’s because I was missing my other half, basically.’

The pair also talked about how strange people had come to study them, giving them tests and asking them questions.

They did not know it, but they had been used as guinea pigs in a secret 1960s study that used twins separated by their adoption agency to find out whether nature or nurture governs a person’s life outcomes.

When they found out, both they and their families were furious at being duped and used.

Not only did they miss out on bonding during their childhood years in what might have been their closest relationship, but they are angry at not being told.

The New York City adoption agency, Louise Wise Services, would only confirm they were twins and would not hand over any records or information, the pair said. 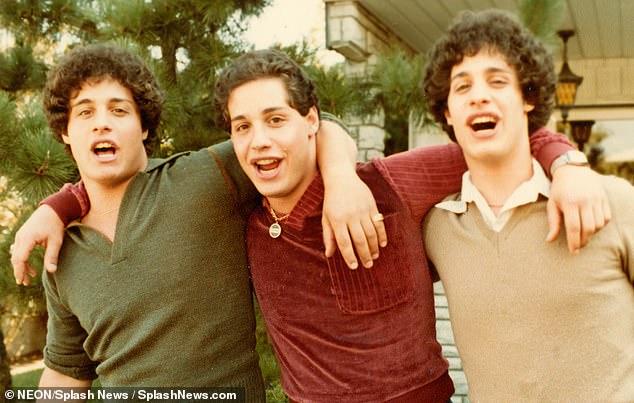 The pair were not the only ones separated – and enraged – as part of the study.

Robert reunited with Eddy by chance after attending the same upstate New York college as his brother a year after he transferred.

‘Guys were slapping me on the back, and girls were hugging and kissing me,’ he said.

It was all very welcoming – except for the fact they insisted on calling him Eddy.

When the pair reunited their picture was in the local newspaper, where it was seen by their third brother David.

The trio had been born on Long Island, New York, then placed in different families to study the effects of the socio-economic environment on the boys’ development.

One family was wealthy, one middle class and one working class. 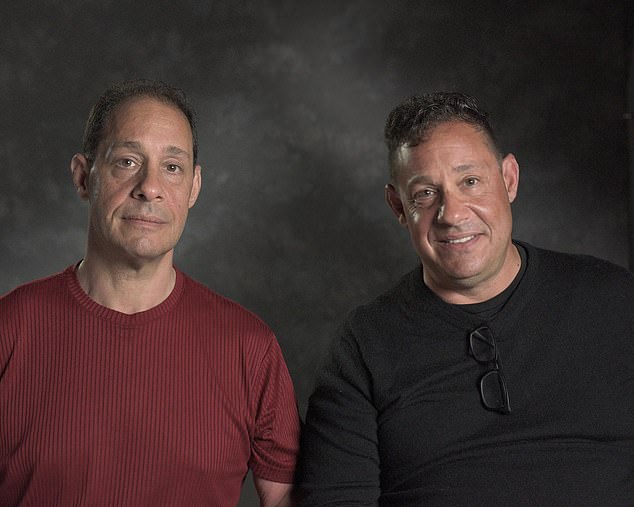 Robert Shafran’s father was a doctor and his mother a lawyer, and they lived in affluent Scarsdale, in Westchester County.

Eddy Galland’s family lived in a middle-class suburb in Long Island, where his father was a teacher, while David Kellman’s parents lived in working-class Queens.

Several researchers were involved in the study, which had funding from the US National Institute of Mental Health, over about 15 years.

During the 1960s, at least eight twins and one set of triplets were separated, with  the babies placed in different homes.

Those in charge of the experiment had good credentials as advocates for social justice at the time.

Louise Wise Services was started in 1916 by Louise Waterman Wise, the wife of prominent Rabbi Stephen Wise who helped found the American Jewish Congress and the National Association for the Advancement of Colored People (NAACP).

Psychiatrist Peter Bela Neubauer was an Austrian Jew who had escaped from Nazi Germany’s holocaust to Switzerland before moving to New York in 1941. 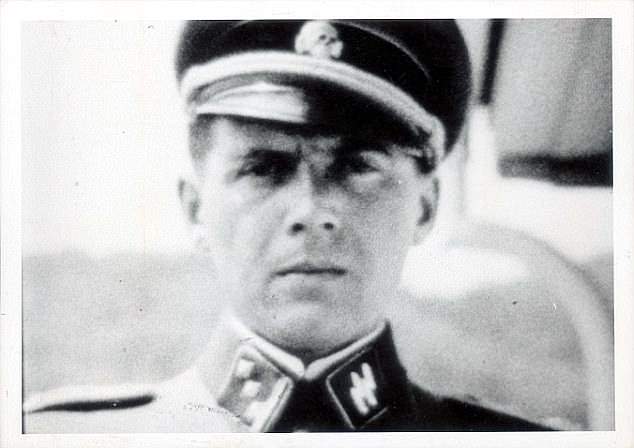 Decades later his own twin experiment was compared by his angry subjects to the same Nazi regime he had fled from.

Yet the experiment, now criticised as cruel, began with the best of intentions.

Separating twins for adoption was not begun for experimentation but because it was thought to be the best thing for the children.

Dr Viola Bernard was the chief psychiatric consultant to Louise Wise Services – and it was she who first began separating the twins.

She hoped that by separating the twins they would not have to compete for their adoptive mother’s attention.

Yale University Library in the USA, where all the records are locked under seal until 2065. The twins are angry they cannot get their own information out

‘Early mothering would be less burdened and divided and the child’s developing individuality would be facilitated,’ she wrote in a recently uncovered memo quoted by Psychology Today.

According to Psychology Today, other adoption agencies also separated twins at the time, and it was standard practice to have a ‘closed adoption’, where adoptive parents signed a contract guaranteeing they would not know anything of the family background of the infants.

The families and the children were not told they were part of a study, angering the adult twins now.

However the study began long before the rules of informed consent were introduced to the US by the National Research Act of 1974.

As the year passed, however, the study began to be viewed as evil. 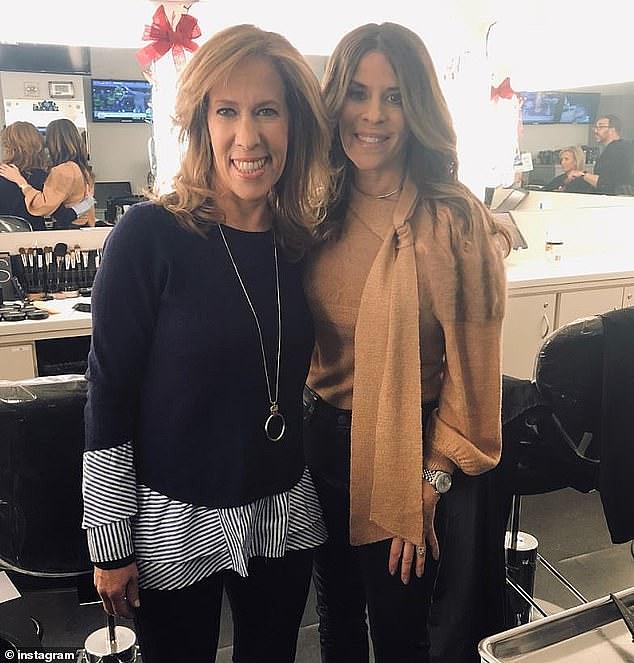 ‘These individuals were deprived of what could could have been the closest of human social relationships, and not to have had that, to be deprived of that, is horrible,’ she said.

Most devastatingly she said several of the parents had indicated they would have been happy to adopt twins, including one couple who had asked more than once, she said.

Two documentaries made about the experiment, The Twinning Reaction and Three Identical Strangers, both said some of the separated children had to deal with mental health issues as adults.

Three of them committed suicide, including one of the triplets, Eddy Galland, who killed himself in 1995.

His triplet brothers David Kellman and Robert Shafran star in Three Identical Strangers, and they still harbour bitterness towards the agency and the scientists who, they say, deprived them of 20 years of growing up together.

Robert told 60 Minutes he had separation anxiety due to be separated from his brothers as a child.

‘My mother said I would bang my head on the other side of the crib and hold my breath until I passed out,’ he said.

David said he had the same trauma.

‘I remember being told by my mother while I was a baby that I would slam my head against the wall,’ he said.

All three of the boys had psychiatric care as teenagers.

‘This is like Nazi sh**,’ Robert later told documentary makers, referring to the horrific experiments that Nazi doctor Josef Mengele carried out in Auschwitz, where he experimented on, tortured and killed twins.

After the documentaries publicised the case, more identical twins separated by the Louise Wise Services began finding each other.

Michele knew she had been adopted out by Louise Wise Services so she took a DNA test.

Weeks later, Michele received her Ancestry.com results and discovered she had an ‘immediate family member’, and looked the member up on Facebook.

At first when she saw her own face looking back at her on Facebook, she thought someone had assumed her identity.

Weeks later, on August 10, 2018, Michele and Allison reunited in New York City and are glad to have found each other at last.

Until his death in 2008, Dr Neubauer insisted he had done the right thing, but he never published a paper about it, fearing it would be too controversial as the tide of public opinion turned against research without consent.

The public has not benefited from the scientific research he conducted, so suffering caused by the study has so far been for nothing.

Yale University has all the records of the twins’ early lives and they are locked – sealed until 2065, under orders from Dr Neubauer, despite requests from the twins to see their own files.

‘You shouldn’t hide my life from me,’ said Melanie.

‘The fact it was never publicised is like really? You did it all for nothing, then? We describe him as a Nazi, honestly.’

‘It really does seem as though the suffering … really was for nothing,’ she said.

‘There’s no real end product here, nothing that we can say that we’ve learned – we’ve only learned how not to do research.’