BREAKING NEWS: Donald Trump will unveil police reform plan on Tuesday that WILL say there is ‘systemic racism’ and will meet black families who have suffered at hands of cops

Donald Trump said Monday that he will present ‘solutions’ in a police reform executive order he will unveil on Tuesday, as reports reveal it will include admitting there is systemic racism rooted in law enforcement.

Trump told reporters during a roundtable on ‘Fighting for America’s Seniors’ that he would ‘save’ revealing all the details of the executive order for a Rose Garden event on Tuesday where he will be joined by Attorney General Bill Barr.

‘We’re going to have some solutions,’ he said, admitting: ‘We need some great people in our police department.’

He didn’t seem too optimistic about Congress passing anything on the matter, despite Democrats presenting a sweeping police reform bill last week. 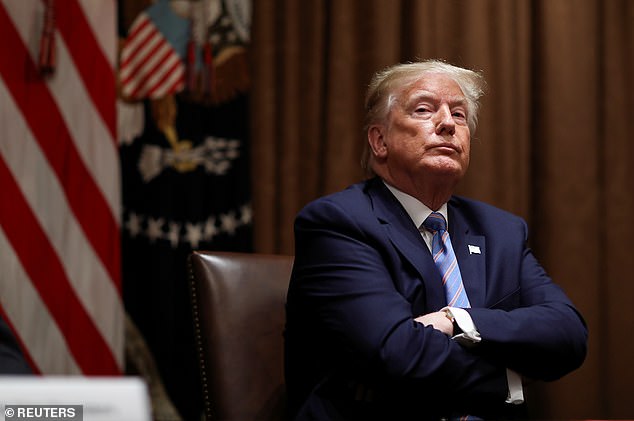 Trump, Merrit and White House adviser Ja’Ron Smith told NBC News, will separately and privately meet on Tuesday with black families who have been affected by police violence.

‘The overall goal is we want law and order,’ Trump told reporters at the White House Monday as he continues to dub himself the ‘law and order president.’

The executive order will come more than three days weeks after George Floyd died in Minneapolis while in police custody after a white cop, Derek Chauvin, held his knee on the back of the victim’s neck for more than eight minutes.

The incident, which went viral thanks to a bystander taking video, sparked nationwide unrest and led to weeks or rioting, looting, arson, protests and other demonstrations regarding race and black communities’ relationship with law enforcement.

It has also ignited a movement by far-left factions of the party calling for the defunding and dismemberment of police departments across the U.S.

Trump has tweeted several times about the unrest, but his only public remarks on the incident came on June 1, when he spoke to reporters in the Rose Garden before walking across Pennsylvania Avenue for a photo-op in front of a church that was set on fire in riots.

Related posts:
Bodycam shows moment black handcuffed shoplifting suspect is shot dead by cop in Walmart parking lot – The Sun
Broadchurch location: Where is Broadchurch filmed? Where’s it set?
Popular News
Cameron Diaz Basically Retired From Acting to Become a Winemaker
16/07/2020
Man Utd wonderkid Ramon Calliste, called ‘the next Giggs’, now owns luxury watch business and makes £5m a year – The Sun
26/03/2020
Megan Thee Stallion Addresses Criticism Over Twerking: ‘I Love to Shake My A**’
26/03/2020
Police guard shops to stop coronavirus panic-buyers and enforce social distancing – The Sun
26/03/2020
Coronavirus: Good Morning Britain’s Dr Hilary reveals ‘game-changing’ self-testing kit
26/03/2020
Recent Posts
This website uses cookies to improve your user experience and to provide you with advertisements that are relevant to your interests. By continuing to browse the site you are agreeing to our use of cookies.Ok