Donald Trump has said that the Queen should strip Meghan Markle and Prince Harry of all their royal titles.

The former US president previously claimed the actions of both the Duke and Duchess of Sussex caused pain to the monarch.

It comes after the royal couple flew from their home in the US and stopped off in England to visit the Queen before heading to The Hague in the Netherlands for the Invictus Games.

Their attendance at a reception at the games marked their first public appearance together in Europe since quitting as senior working royals more than two years ago.

In an upcoming interview, Piers Morgan asked Trump if the Queen should strip them of their titles, it was reported by The Sun. 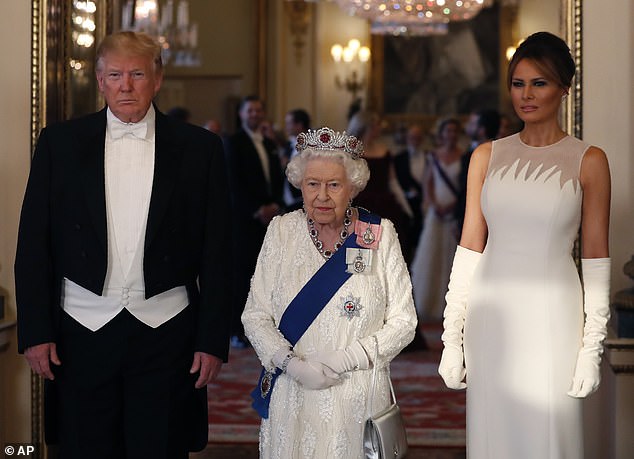 Trump responded: ‘I would. The only thing I disagree with the Queen on probably one of the only things ever is that I think she should have said, if that’s your choice, fine.

‘And I think that he has been so disrespectful to the country, and it’s a great country. Harry is whipped.’

He said: ‘I’m not a fan of hers. I wasn’t from day one. I think Harry has been used horribly. I think someday he will regret it. He probably does already.

‘I think she’s been very disrespectful to the Royal Family, most importantly to the Queen, and I just… from day one I never got it.’ 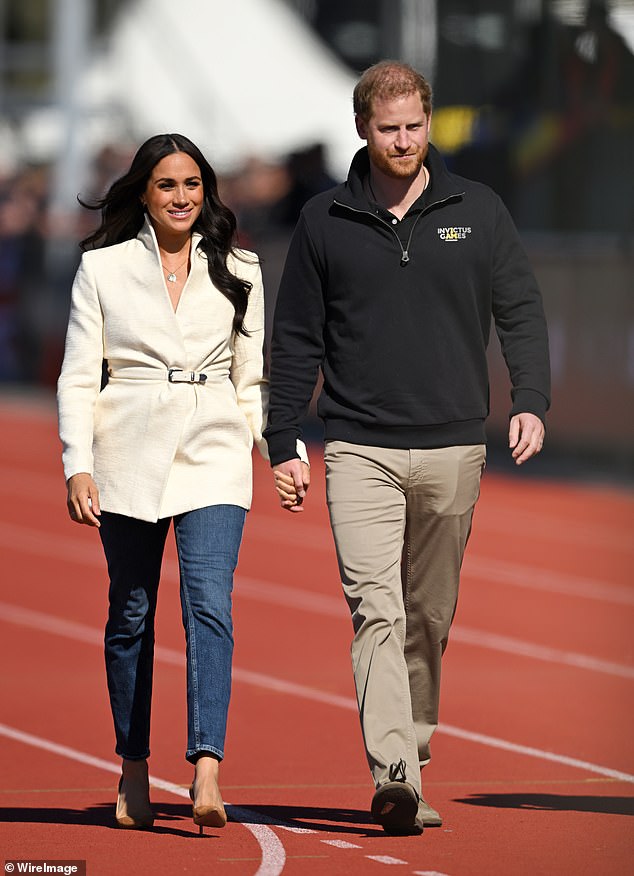 Prince Harry, Duke of Sussex and Meghan, Duchess of Sussex attend the athletics event during the Invictus Games at Zuiderpark

Harry may be under pressure to relinquish his dukedom – but there is no suggestion the Queen would strip him of it.

She conferred on him the titles of Duke of Sussex, Earl of Dumbarton and Baron Kilkeel on his wedding day in 2018.

Were he to give those up, he would revert to HRH Prince Henry of Wales and Meghan would become HRH Princess Henry of Wales. As sixth in line to the throne, the title of Prince is his birthright, although he could choose not to use it.

When the couple decided they would no longer represent the Queen in an official capacity, they were allowed to retain their Royal titles and HRH styles, although they agreed not to use the latter.

It comes after Trump released an audio recording that seemingly refuted an edited video clip that appeared to show him storming out of a sit-down interview with Piers.

A 30-second trailer, released on Wednesday, depicted Trump abruptly ending the interview after Morgan challenged Trump’s stolen election claims and ordering the crew to ‘turn the cameras off’ as he gets up from his chair and storms off. ‘Very dishonest,’ he mutters.

But the audio recording, provided by Trump’s spokesman to NBC News, indicates that the interview ended with the two men thanking each other for a ‘great interview’ and laughing, with no sign of Trump storming off the set.

Trump communications director Taylor Budowich claims the video trailer was deceptively edited by splicing audio of Trump saying ‘turn the camera off’ over video of him standing up, to make it look as if he abruptly cut off the interview.

The British commentator Morgan recently signed a comprehensive deal with Fox News parent company News Corp – and the trailer was intended to promote an interview airing next week on News Corp outlets around the world.

The sequence depicted in the video matches Morgan’s dramatic description in a column for the New York Post, which is also owned by News Corp.

Morgan wrote that the interview ended with Trump ‘abruptly jumping to his feet, looking hateful, and barking at the shocked crew: ‘TURN THE CAMERAS OFF!” 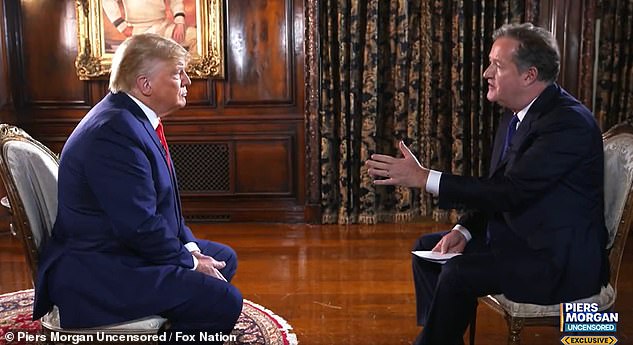 ‘Then he turned on his heel, and sloped angrily off through a side door, loudly muttering, ‘SO dishonest …’ added Morgan.

But according to NBC, the audio provided by the Trump camp shows the interview actually ending with Morgan saying: ‘That was a great interview.’

‘Thank you very much. I really appreciate it,’ Morgan says.

It’s at that point in the audio that Trump is heard saying, ‘Turn the camera off.’