New York: US President Donald Trump's latest efforts to block a grand jury subpoena for his tax returns could provide him with the immunity from prosecution that the Supreme Court has rejected, the Manhattan district attorney's office said in a court filing on Monday.

The district attorney, Cyrus Vance jnr, has been investigating payments made ahead of the 2016 presidential election to two women who claimed to have had affairs with Trump several years prior, and whether any business records were manipulated in violation of New York state law. Trump, who has denied the women's allegations, has been fighting the subpoena to his accounting firm. 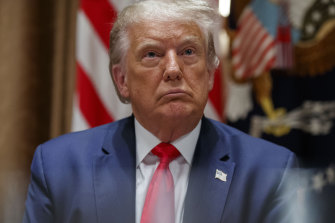 US President Donald Trump continues to fight moves to release his tax returns.Credit:AP

Vance's investigation is focused on the possibility that business records at Trump Organisation were altered in an attempt to conceal the true nature of the payments.

The district attorney's filing comes as Trump's lawyers argue the subpoena is illegal, having been shut down by the Supreme Court last month in their bid to claim that, as a sitting president, Trump is immune from investigation.

The district attorney's office countered on Monday that the President's latest argument, filed in Manhattan federal court last week, is an attempt to obstruct the investigation from going forward. Impending statutes of limitations are nearing and could hinder authorities from pursuing charges if a case is warranted, the filing says.

"Every day that goes by is another day [Trump] effectively achieves the 'temporary absolute immunity' that was rejected by this court, the Court of Appeals, and the Supreme Court," Dunne said.

Marrero has previously rejected arguments akin to those in the President's new complaint, Dunne wrote. Trump's new claim that the subpoena is "overbroad" and issued in bad faith for political purposes has been raised in arguments throughout the litigation that led to the major Supreme Court ruling, but it was never formally presented by Trump's legal team, allowing them to raise it now that the immunity issue is dead.

Trump was dealt a blow by the Supreme Court last month when in a 7 to 2 decision, the court said he was not protected by presidential immunity from state-court level actions. The court allowed for the case to get sent back to the US District Court in Manhattan for any additional challenges Trump would seek to make.

In the amended civil complaint filed a week ago, the President's lawyers challenged the legality of the subpoena and dubbed Vance's investigation "harassment."

The prosecutor is investigating whether there was a violation of New York state law when the hush money payments were made to pornography actress Stormy Daniels and former Playboy model Karen McDougal. Michael Cohen, Trump's longtime personal lawyer and confidant, made the payments while still employed by Trump.

Vance's office initiated a grand jury proceeding in 2018. The subpoena was to Mazars USA, Trump's accounting firm, last August. It mirrored two congressional subpoenas that had already been issued, a fact the President's lawyers also have criticised as proof the investigation is politically motivated.

Before the subpoena, the Trump Organisation cooperated to an extent with Vance's requests "including by producing hundreds of documents in response to the grand jury subpoena," it says.

Trump's tax returns were the sticking point, leading Vance to subpoena the accounting firm instead of trying to get it from the Trump Organisation, according to court records.

These are the famous men Fantasia Barrino has dated
Katie Price screams in pain having her feet put into plaster as she begs medics for help after horror accident
Popular News
Why does Tom Cruise do his own stunts? ‘No one asked Gene Kelly, ‘Why do you dance?’’
18/05/2022
Man Utd wonderkid Ramon Calliste, called ‘the next Giggs’, now owns luxury watch business and makes £5m a year – The Sun
26/03/2020
Megan Thee Stallion Addresses Criticism Over Twerking: ‘I Love to Shake My A**’
26/03/2020
Police guard shops to stop coronavirus panic-buyers and enforce social distancing – The Sun
26/03/2020
Coronavirus: Good Morning Britain’s Dr Hilary reveals ‘game-changing’ self-testing kit
26/03/2020
Recent Posts