Trump claims, without evidence, Beirut explosion was an ‘attack’

Washington: US President Donald Trump has surprised military officials by claiming, without presenting evidence, that the giant explosion that killed at least 100 people in Beirut was an "attack".

Lebanese officials have not stated that the incident was an attack, instead saying that the explosion occurred at a depot containing highly explosive ammonium nitrate. 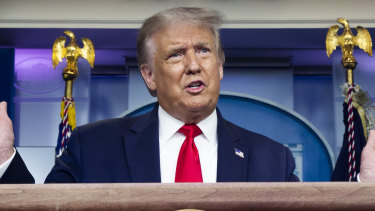 US President Donald Trump made the surprising claim at his regular White House briefing.Credit:AP

At a White House press conference on Tuesday (Wednesday AEST) Trump said the explosion "looks like a terrible attack".

Asked if he was confident if the explosion was an attack rather than an accident, Trump said: "It would seem like it based on the explosion.

"I've met with some of our great generals and they just seem to feel that it was not a…some kind of manufacturing explosion type of event."

He said the generals "seem to think it was an attack".

Asked for clarification, a Pentagon spokesperson directed requests for comments to the White House.

At least one Australian was killed in the blast, which destroyed large parts of Beirut and injured more than 4000 people.

Several US media outlets – including Reuters and CNN – reported senior Department of Defence officials saying there was not evidence to support Trump's attack claim.

CNN reported that the officials did not know what Trump was talking about when he made the claim while Reuters reported Pentagon sources saying they believed the incident was an accident rather than a deliberate attack.

Major General Abbas Ibrahim, the head of Lebanon's General Security Directorate, said the dangerous material may have been stored there for up to six years.

"It appears that there is a warehouse containing material that was confiscated years ago, and it appears that it was highly explosive material," he said.

Trump opened his daily briefing expressing his condolences to those affected by the explosion and extending an offer to assist Lebanon in the recovery.

"Our prayers go out to all the victims and their families,' Trump said.

"The United States stands ready to assist Lebanon. We have a very good relationship with the people of Lebanon and we will be there to help. It looks like a terrible attack."

The Jordanian Seismological Observatory estimated the explosion was equivalent to a magnitude 4.5 earthquake.

In a statement offering condolences to families of the dead and injured, Hezbollah – both a militant group and a political party in parliament – did not lay blame for the explosion, calling the incident a "huge national tragedy" and urging Lebanese to unite to overcome the ordeal.

Beirut blast survivors sift rubble for bodies as death toll rises
Teenager ‘who kept sex slave, grooming her and then pimping her out’ arrested as he hid in attic
Popular News
Why does Tom Cruise do his own stunts? ‘No one asked Gene Kelly, ‘Why do you dance?’’
18/05/2022
Man Utd wonderkid Ramon Calliste, called ‘the next Giggs’, now owns luxury watch business and makes £5m a year – The Sun
26/03/2020
Megan Thee Stallion Addresses Criticism Over Twerking: ‘I Love to Shake My A**’
26/03/2020
Police guard shops to stop coronavirus panic-buyers and enforce social distancing – The Sun
26/03/2020
Coronavirus: Good Morning Britain’s Dr Hilary reveals ‘game-changing’ self-testing kit
26/03/2020
Recent Posts