The orders marked an extraordinary attempt by Trump to wrestle away some of Congress's most fundamental, constitutionally mandated powers – tax and spending policy. The proposals could be challenged in court.

One of the executive orders aims to provide $US400 in weekly unemployment aid for millions of Americans whose $US600 in weekly benefits expired last month. Trump said 25 per cent of this money would be paid by states, many of which are already dealing with major budget shortfalls and have pleaded with Congress for more aid. 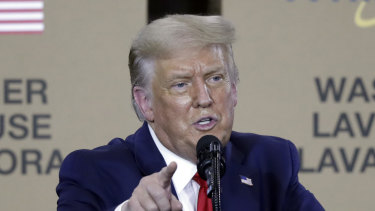 Donald Trump’s bold bid may be challenged in court. Credit:AP

Two of the other executive orders are related to eviction protections and student loan relief.

And the fourth executive order would seek to defer payroll tax payments from September through December for people who earn less than $US100,000. The president said if he wins re-election he would seek to extend the deferral and somehow "terminate" the tax. The tax funds Social Security and Medicare benefits, and it's unclear what will happen to those programs without the money.

The first three issues had been the subject of talks with congressional Democrats, which faltered on Friday. The payroll tax initiative is one Trump has sought for more than a year with little congressional support, and Senate Republicans left the measure out of their relief proposal.

Trump signed the orders during a press event in Bedminster, New Jersey. On Friday, Trump acknowledged that the executive orders could be controversial and prompt lawsuits. Democrats on Friday signaled they were still holding out hopes that talks with the White House could be revived.

Some experts have said the president has no legal basis to unilaterally extend unemployment benefits. The president on Saturday told reporters, "We have a lot of money that was unspent."

Congressional Democrats said they were willing to cut $US1 trillion off their stimulus package but that the White House's negotiators rebuffed their overtures.

As the president acknowledged at his news conference, the executive orders leave unaddressed multiple critical needs. Bipartisan support had grown on Capitol Hill to provide hundreds of billions in additional funds to help schools safely reopen; for a second round of $US1200 stimulus payments; and a replenishing of funds for the Paycheck Protection Program, among other issues. Trump accused Democrats of blocking these programs from being funded, but he may face political blowback for failing to secure those initiatives in an election year.

Trump signed the orders two weeks after key parts of the $US2 trillion Cares Act expired. The law passed in March with bipartisan support but the White House and Democrats were unable to reach agreement on legislation to deal with expiring provisions.

The Cares Act provided enhanced weekly unemployment benefits of $US600 through July, as well as temporary eviction protections, which also expired in July.

The executive orders also amount to at least a partial about face from Trump's promises as a presidential candidate, when he panned executive orders. "We don't want to continue to watch people signing executive orders because that was not what the Constitution and the brilliant designers of this incredible document had in mind," Trump said in March 2016. "We need people that can make deals."