Tory MPs have been inundated with teddy bears carrying angry messages and empty plates in protest after they voted against free school meals over the half term.

Meanwhile, around 20 paper plates were stuck to the office window of Tory MP Stuart Anderson in Wolverhampton. 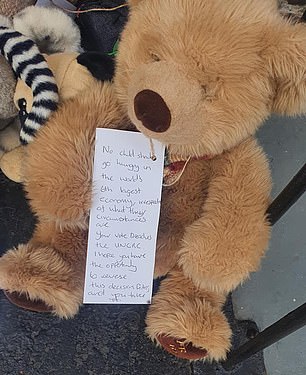 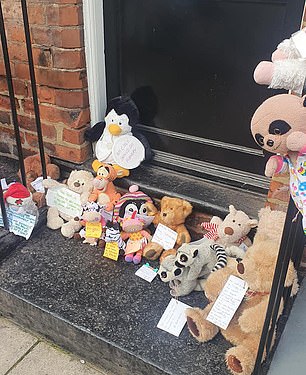 The teddy bears pictured outside Darlington MP Peter Gibson’s office in County Durham, with one bearing a message that ‘no child should go hungry in the world’s biggest economy’ 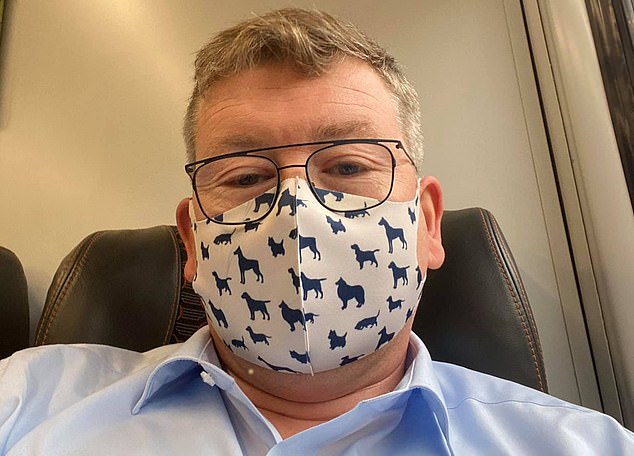 Mr Gibson, pictured above, said: ‘Just as I have welcomed all manner of donations for charities at my office, the soft toys left at my office will be donated to a local charity’

The pictures show one teddy holding a sign that says: ‘Save a quid, starve a kid!’

Another toy holds a sign, saying: ‘You had a chance to do something to help poor children and you chose not to!’

Mr Gibson told MailOnline that he would be donating the toys left outside his office to a local charity.

He said: ‘I was pleased to see our community come together over the weekend and pack the food supplied by The Bread and Butter Thing, which I understand has been paid for through the £135,000 that Darlington Borough Council received as apart of the Government’s £63 million supplied to local authorities.

‘Just as I have welcomed all manner of donations for charities at my office, the soft toys left at my office will be donated to a local charity.’

Other items on the menu include: ‘Battered electorate with a basked of crushed hopes and slow cooked fatigue.

‘Kids in blankets deep famished with a deprivation of vegetables and a relish reduction.’

It comes as empty plates were seen attached to Mr Anderson’s office, along with a poster which said: ‘Your MP voted no to feeding poor kids’.

The plates were removed within hours of being put up but the word ‘scum’ was then sprayed onto the office window. 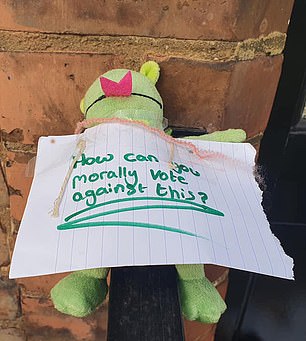 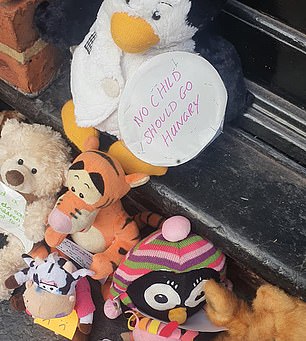 Pictures of soft toys outside Mr Gibson’s office, with one asking: ‘How can you morally vote against this?’, and another bearing the message: ‘No child should go hungry’ 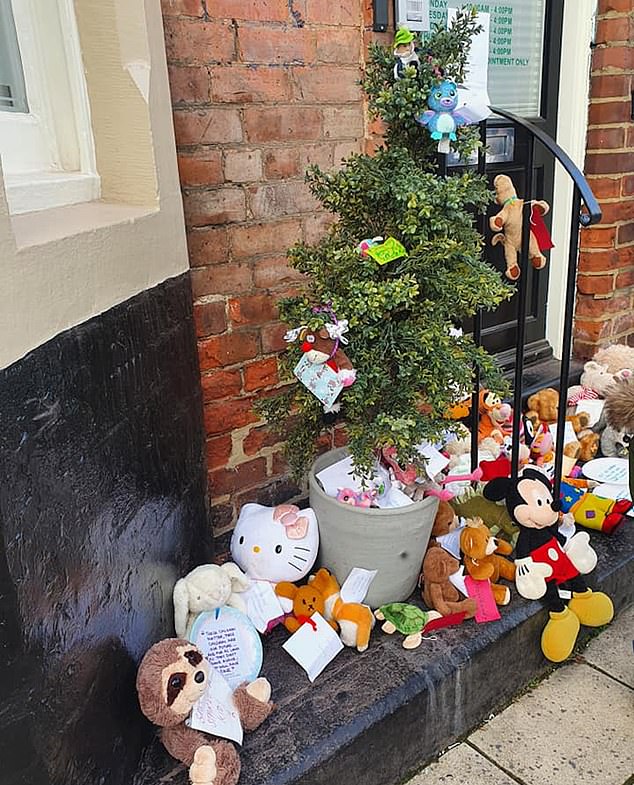 More photos taken outside Mr Gibson’s office show toys sat under a small tree, with one attached to the top believed to be in reference to the lack of meals over Christmas

The Wolverhampton South West MP was also one of 322 MPs who voted against the Labour motion calling for the extension of free meals during the school holidays in England until Easter 2021.

More photos taken outside Mr Gibson’s office show toys sat under a small tree, with one attached to the top believed to be in reference to the lack of meals over Christmas.

The images were shared by a constituent who posted them saying: ‘Thank you to everyone who came down today to Peter Gibson MP office please keep them coming to get the message across. We feel so strongly about this and I’m glad others do too.

‘No child should go hungry. No parents should be judged either in validating this terrible decision.

‘All the money that’s been wasted lately on dodgy PPE and the Track and Trace system the FSM extension in the holiday in this pandemic is not much to ask.’

The post prompted a reaction from social media users, with one writing: ‘Oh fantastic, does anyone smell another u-turn?’ 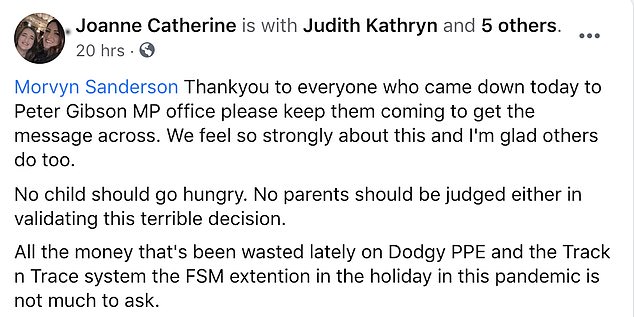 The images were shared by a constituent in a social media post, above, saying: ‘Thank you to everyone who came down today to Peter Gibson MP office’ 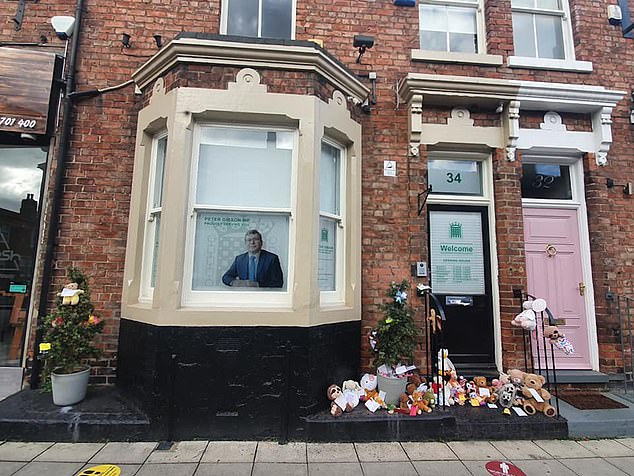 Another wrote ‘get rid of him’, while a third added: ‘Brilliant, you should be proud of yourselves.’

Wolverhampton Council, Birmingham City Council and Staffordshire County Council have all announced plans to fund free school meals this half term after MPs voted against the money coming from central government.

Conservative MP Marco Longhi, who represents Dudley North, has defended voting against the motion and accused Labour of ‘playing politics with Covid and vulnerable children’.

Businesses and community groups across the Black Country and Staffordshire have also stepped in to provide meals, with the Government faces a damaging revolt on the issue.

Dozens of people from a range of organisations have stepped in to help, with Health Secretary Matt Hancock hailing them as ‘absolutely wonderful’ while insisting that millions has already been provided to councils to help their communities.

Among the organisations helping in the region is The Dave Bakehouse Cafe in Darlaston, which was praised by Marcus Rashford for supplying 100 packed lunches a day, and the Elias Mattu Foundation in Wolverhampton. 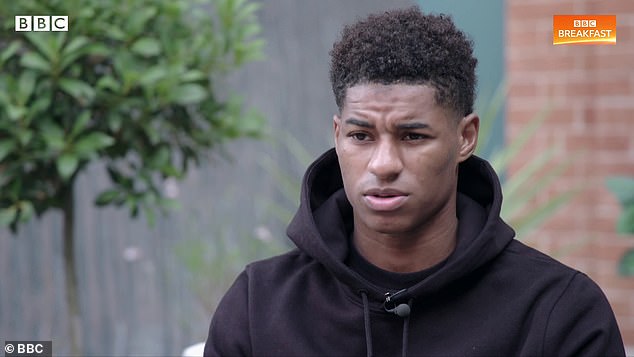 A petition from Marcus Rashford, pictured above, who has been spearheading the demands for free meals to be extended in England over the school holidays, has passed 800k signatures 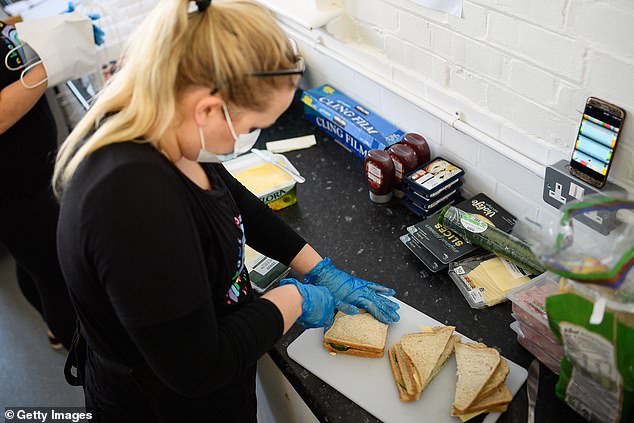 Leigh Ellwood, owner of ‘Planet Youth’ holiday and after-school camps, pictured preparing food lunch packs for those who are in need of free school meals over the half term holiday

Meanwhile a petition from Rashford, who has been spearheading the demands for free meals to be extended in England over the school holidays, has passed 800,000 signatures, piling further pressure on the Government to act.

Mr Hancock said he agrees ‘very strongly’ with ‘the purpose’ of Rashford’s campaign, telling Sky News: ‘I think we’re all inspired by the way that he’s led that campaign.

‘And the purpose is that no child should go hungry, and that’s right.’

He said that Universal Credit had been increased by £20 a week while £63 million has already been provided by central Government to local authorities so that they can support people.

It was put to Mr Hancock that councils, including Tory-run councils, businesses and charities stepping in to say they will help with free meals for pupils shows that more direct action is needed.

‘I think that’s absolutely wonderful that companies have come forward and are playing their part and supporting people in these very difficult times.

‘I also think that it’s brilliant that the councils are coming forward, having been funded by central government, £63 million has gone to councils so that they can do exactly what you say, so that they can support people and make sure that everybody and every child gets the support that they need,’ he said..

Mr Hancock said ‘of course’ he welcomes the support from councils ‘because that is the councils delivering with the funding that has been provided by central government’.

Related posts:
Facebook users are claiming this £8 shampoo gives similar hair-strengthening results to Olaplex
Ice Cube says he's 'not playing politics' by working with Trump
Popular News
Dani Ceballos and Granit Xhaka with woeful displays as Willian only bright spark in Gunners' 2-1 home defeat to Wolves
29/11/2020
Man Utd wonderkid Ramon Calliste, called ‘the next Giggs’, now owns luxury watch business and makes £5m a year – The Sun
26/03/2020
Megan Thee Stallion Addresses Criticism Over Twerking: ‘I Love to Shake My A**’
26/03/2020
Police guard shops to stop coronavirus panic-buyers and enforce social distancing – The Sun
26/03/2020
Coronavirus: Good Morning Britain’s Dr Hilary reveals ‘game-changing’ self-testing kit
26/03/2020
Recent Posts
This website uses cookies to improve your user experience and to provide you with advertisements that are relevant to your interests. By continuing to browse the site you are agreeing to our use of cookies.Ok