Huge tornado rips through Jonesboro in Arkansas, leveling homes and businesses as thousands remain in lockdown during coronavirus crisis

Businesses and homes suffered damage and a citywide curfew was announced in northeastern Arkansas after a tornado ripped through the area on Saturday afternoon, injuring at least three people.

The twister caused considerable damage in Jonesboro, where the Mayor announced a curfew for 7pm. 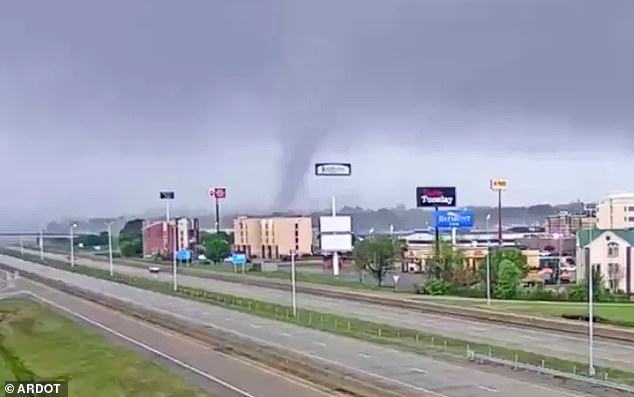 The image above shows a tornado touching down in Jonesboro, Arkansas, on Saturday afternoon 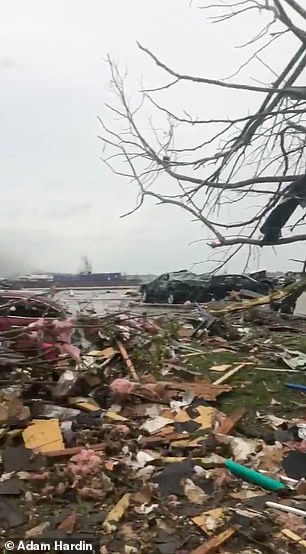 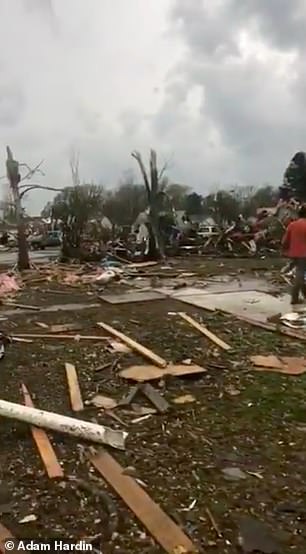 The powerful tornado destroyed homes and businesses, leaving fields of debris in Jonesboro, Arkansas, on Saturday

Arkansas officials told KAIT-TV that first responders were trying to rescue possible victims trapped under the debris of a mall.

The force of the tornado was so great that it sent debris some four miles high, according to experts who analyzed the data.

Cars were overturned, the roofs of houses were torn off, and shards of mangled metal were seen strewn across roadways, according to KNWA-TV.

Jonesboro E-911 Director Jeff Presley tells TV station KAIT that most stores in the Mall at Turtle Creek were closed Saturday to help in fight against spreading coronavirus pandemic.

The National Weather Service tweeted a video from the Arkansas Department of Transportation that showed a large tornado dropping from storm clouds in Jonesboro. 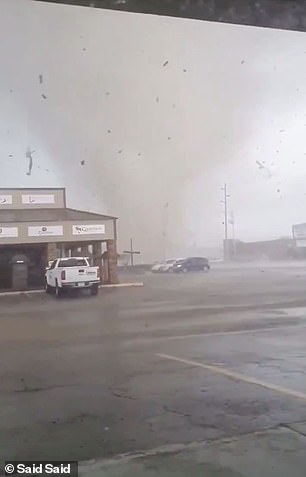 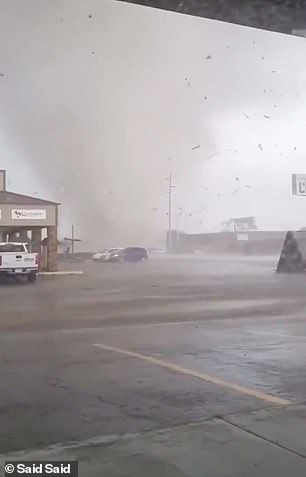 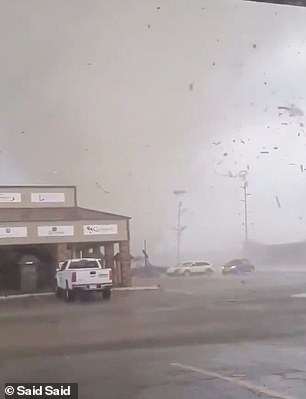 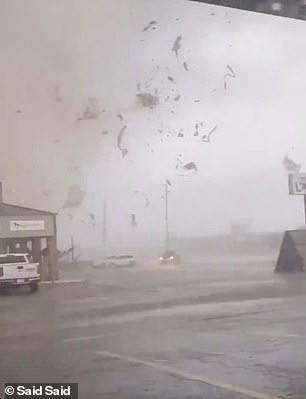 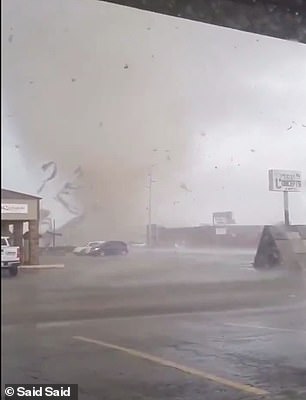 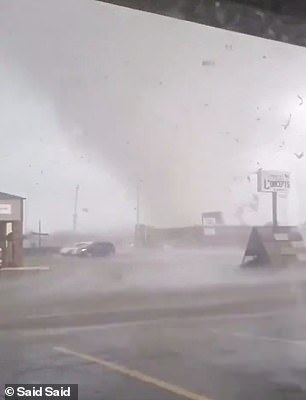 US House Rep. Rick Crawford, who represents much of eastern Arkansas, said on Twitter that a tornado tore through ‘the heart of town’ and asked for prayers for first responders.

Crawford said his staff and family were safe.

Forecasters with the Storm Prediction Center in Norman, Oklahoma, warned that a severe weather outbreak was possible later Saturday for much of the central US Forecasters said tornadoes, large hail and damaging winds are possible, particularly in parts of Illinois and Iowa.

Arkansas Governor Asa Hutchinson said on Saturday that he was ‘paying close attention to the report of a tornado hit in Jonesboro.

‘I know there is property damage. Just praying all is safe.’ 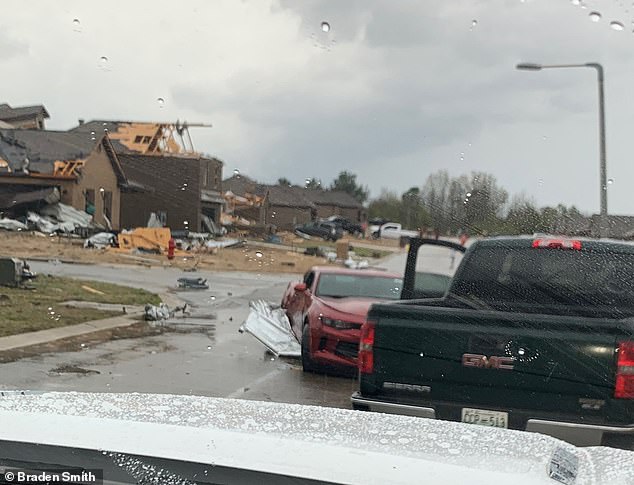 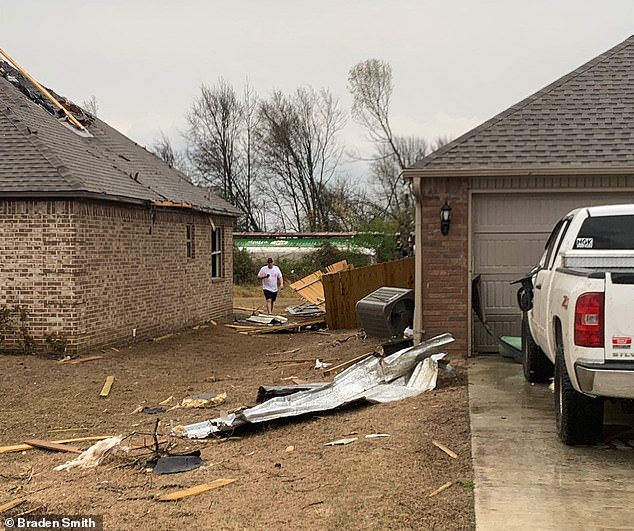 In the distance, a train appears to have been derailed by the force of the tornado 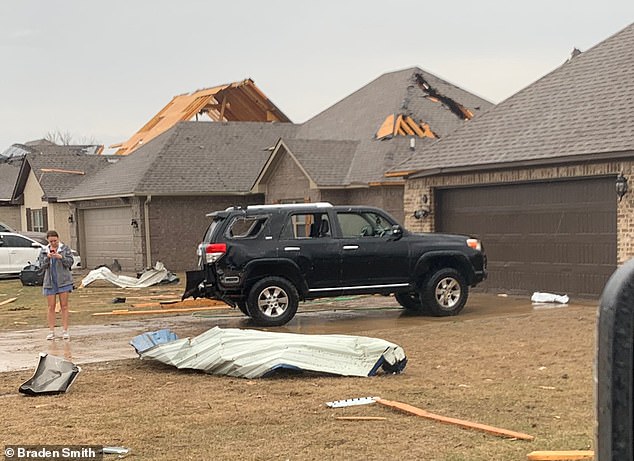 Paul Dellegatto, a meteorologist for Fox 13 TV, played dramatic video of the tornado as it was bearing down on Jonesboro.

‘This is a very life threatening situation right now,’ he said.

‘Get in your tornado safe spot immediately. This is businesses, this is homes. This is a major tornado.

‘Look at the size of that debris being wafted. This is as dire of a situation that we could have.’

The severe weather came as the state, like the rest of the country, was grappling with the coronavirus pandemic.

Hutchinson signed legislation early Saturday creating a $173million fund that he can use to respond to the coronavirus outbreak, and health officials said two more people have died from the virus in the state.

The governor’s signature moves the state’s surplus into a new ‘COVID-19 Rainy Day Fund’ that he can access with the approval of legislative leaders.

Hutchinson signed identical bills creating the fund shortly after they were unanimously approved by the House and Senate in a midnight session.

‘This is a historic moment in this rotunda in which the General Assembly, both House and Senate, has come together in quick fashion to meet the emergency needs of our state,’ Hutchinson said before signing the bills. 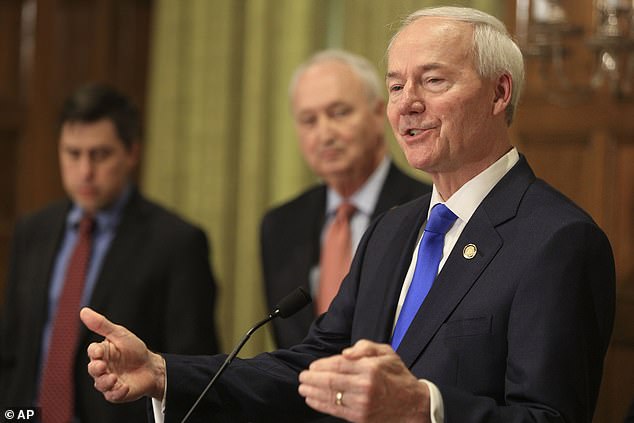 Hutchinson announced later Saturday that the number of people with COVID-19, the illness caused by the coronavirus, had increased to at least 404 from 386 the previous day.

The number of people who have died from the illness increased to five.

One was in their 70s and the other in their 40s, Smith said.

For most people, the new coronavirus causes mild or moderate symptoms, such as fever and cough that clear up in two to three weeks.

For some, especially older adults and people with existing health problems, it can cause more severe illness, including pneumonia.

State Commerce Secretary said Arkansas processed 30,000 new applications for unemployment this past week, a record number and an increase over the 9,400 the state saw the previous week.

Preston said the department is expanding its capability, including making the website for applications available seven days a week.

‘This is a health crisis we’re facing in Arkansas, but it is also a financial crisis for many Arkansans,’ Hutchinson said.

The creation of the fund to respond to the outbreak capped a marathon session that began Thursday.

Hutchinson called the session in response to a $353million shortfall he said the state faced because of the coronavirus.

Concerns about the coronavirus moved the House from its chamber in the Capitol to a basketball arena, with representatives spaced at least 6 feet from one another in the stands.

The Senate met at the Capitol, but restricted the number of members allowed on the floor.