Labour leader Sir Keir Starmer claimed the Conservative Party ‘has shown it no longer has a mandate to govern’ and called for the public to be given an opportunity to choose the next prime minister.

But the Tories will hold out against the demand after recent polling suggested they faced an electoral wipeout.

The latest survey, released on Monday afternoon, put Labour on a 36-point lead – the highest lead ever recorded for any party by any pollster.

If replicated in a general election, the result would leave the Conservative Party with fewer MPs than the SNP and see several Cabinet ministers lose their seats.

However, the past fortnight has left the Tory party in such disarray that some of its own MPs are calling for an election, with one backbencher yesterday saying he was ‘ashamed’ of his ‘revolting colleagues’.

Christopher Chope told Times Radio: ‘The Conservative Parliamentary Party has proved over the last several hours that it’s ungovernable. I’m ashamed of the way in which my revolting colleagues have basically destroyed another prime minister and leader of our party. 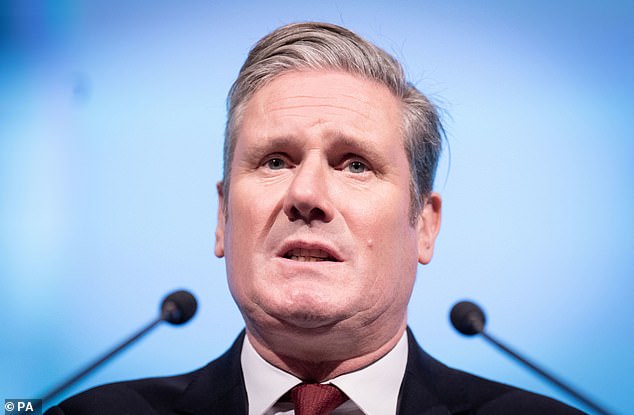 By Senior Political Correspondent For The Daily Mail

Sir Keir Starmer yesterday criticised the ‘pathetic squabbles’ in the Tory Government and claimed that Labour was the ‘party of sound money’.

Addressing the Trade Union Congress conference in Brighton, the Labour leader said his sister, a care worker, ‘struggles to make ends meet’ because of the cost of living crisis.

He warned that the damage inflicted on the public finances over recent weeks meant a Labour government would face difficult decisions if it was to restore confidence in the UK economy. 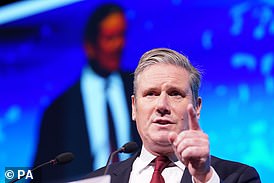 But Miss Rayner stayed away, despite being cheered by ‘comrades’ for saying trade unions ‘are in my bones’ the night before.

Sir Keir has banned his shadow ministers from standing on picket lines to distance himself from militant unions, but the postal workers said Miss Rayner should have ‘got out of bed, and come and support’.

‘I don’t see now that there’s any reasonable response we can make other than to call an immediate general election… What we need now is a new mandate from the people.’

Earlier this year the Fixed-term Parliaments Act was repealed, meaning elections are no longer limited to every five years.

There is currently no requirement for the Government to call an election before January 2025, although the most likely date for a national ballot is May 2024.

But if repeated prime ministers fail to hold the support of their parliamentary party, preventing them from passing laws in the House of Commons, they will come under pressure to call an election to win a mandate to govern. The most likely mechanism would be a motion of no confidence. If a majority of MPs vote in favour then a general election is called.

While MPs are unlikely to vote against the Government when their seat is at risk, senior Tories will be anxious not to try the King’s patience if chaos in Westminster is damaging the UK’s reputation on the international stage.

Opposition parties demanded that the next Tory leader should call an election once they are elected, claiming that the chaos in Westminster was unacceptable while the country faced recession and a cost of living crisis.

Sir Keir said: ‘The Tories cannot respond to their latest shambles by yet again simply clicking their fingers and shuffling the people at the top without the consent of the British people.

‘They do not have a mandate to put the country through yet another experiment. Britain is not their personal fiefdom to run how they wish. The British public deserve a proper say on the country’s future.’

Insisting Labour were ready for a vote, he added: ‘There’s a manifesto that is going to be ready whenever an election is called.’

Liberal Democrat leader Sir Ed Davey said: ‘We do not need another Conservative prime minister lurching from crisis to crisis, we need a general election.’

Scotland First Minister Nicola Sturgeon has said a general election is a ‘democratic imperative’. The calls for a general election have been strengthened by Liz Truss’s decision to move so far away from the manifesto Boris Johnson was elected on in 2019.

But levelling up minister Paul Scully said: ‘People elected a government, this is not a presidential system.

‘Of course Labour want a general election but what you will find is that when the [Conservative] Party get their strong leader, eventually things will turn to what Labour have to offer.’