Thunderstorm warnings continue for most of the UK today as parts of the country prepare for flash floodings and up to six inches of rain to fall in a matter of hours – but the South and parts of northern England are set to bask in sunshine where temperatures could reach highs of 96F in London.

Downpours are being predicted for parts of North Wales and the West Midlands, while an amber warning for storms has been issued for the area of Scotland between Edinburgh, Inverness and Aberdeen – alerting Scots to the possibility of flash flooding, damage from lightning strikes and hailstones.

Delays to public transport, difficult driving conditions and possible road closures could also follow, while deep and fast floodwater could be a threat to human life.

A less serious yellow warning remains in place for most of England and other parts of Scotland, the caution is its penultimate day and will end tomorrow.

Under its yellow warning, the Met Office is predicting storms in particular for the north-west, north Wales and the West Midlands for Wednesday and Thursday.

Chief meteorologist Steve Ramsdale said in these areas ‘exceptional rainfall totals could be seen of 60 millimetres in an hour with a very small chance of 150 millimetres of rainfall in three or four hours’. 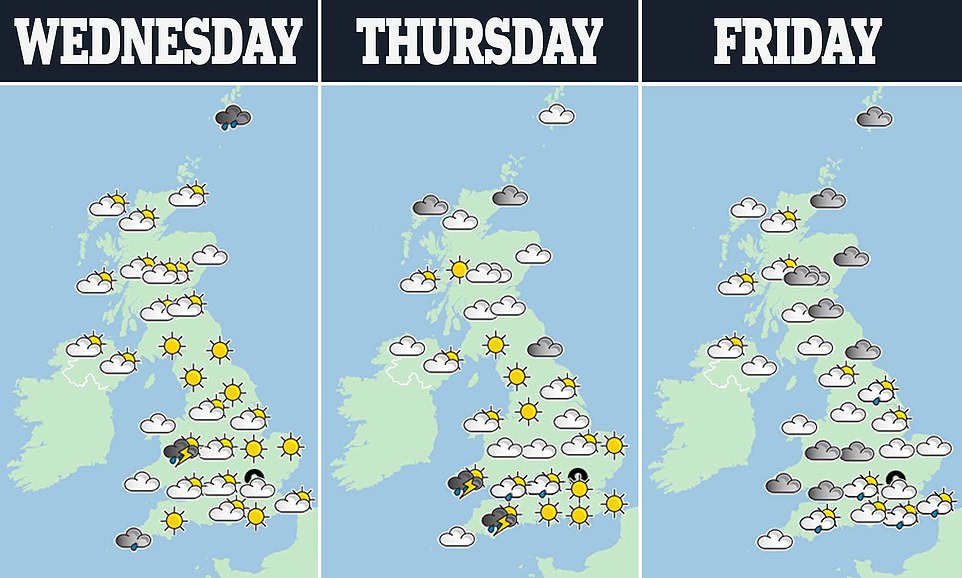 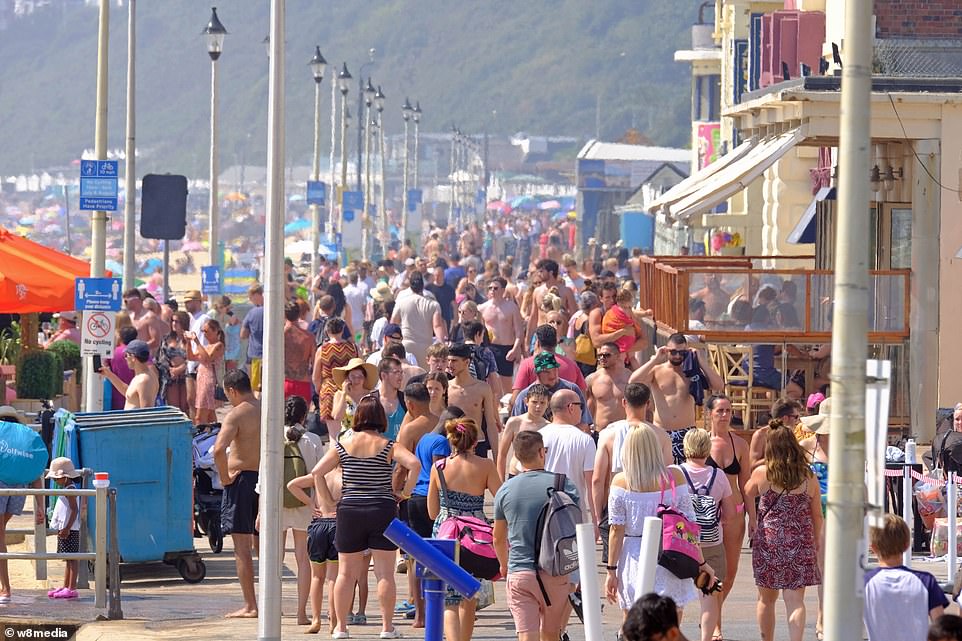 Scorching temperatures in the South had families and visitors packing on to Bournemouth beach yesterday, with Britain’s heatwave expected to continue today

The Environment Agency has five flood alerts posted for possible flooding in areas around Birmingham, while 17 flood alerts remain current across Scotland.

England’s heatwave is set to continue, with London expecting a top temperature today of 96F, which is also forecast for other areas including Cambridge, Yeovil and Southampton.

It will also be warm further north, with Leeds, Sheffield and Nottingham expecting 87F degrees, as is Birmingham and Cardiff.

Temperatures reached highs of 96F at Heathrow yesterday, should the mercury reach higher than 93F today, it would confirm the country’s most severe heatwave ever as a Met Office level three heat health alert remains in place. 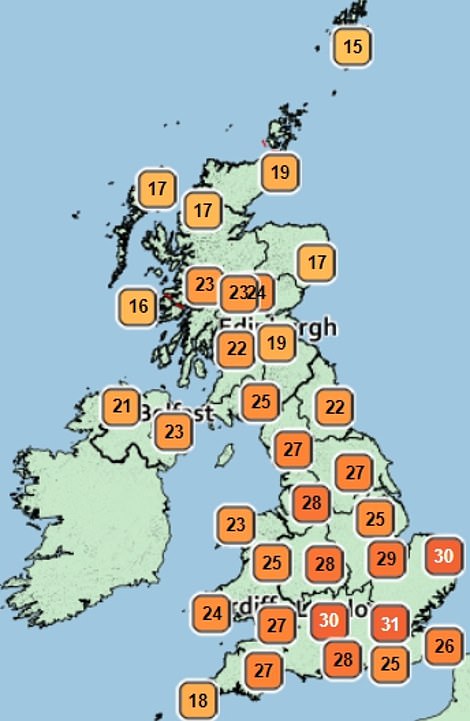 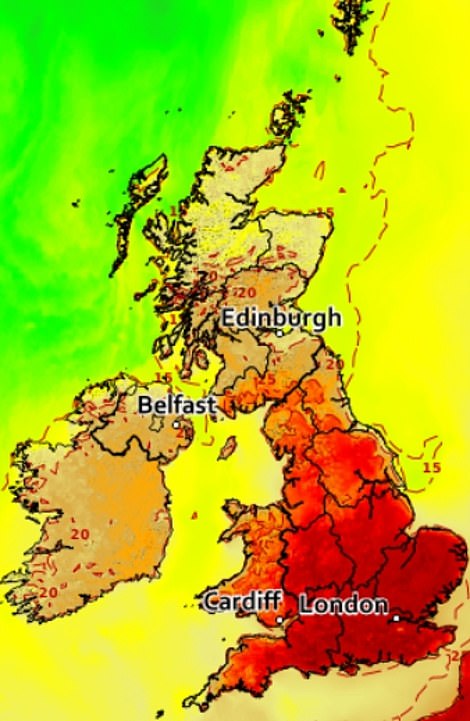 Southern and eastern parts of England are set to be the hottest parts of the country today, with chances of storms elsewhere 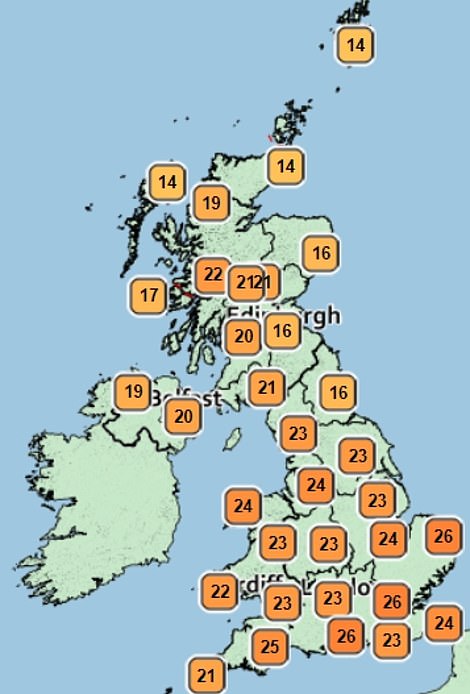 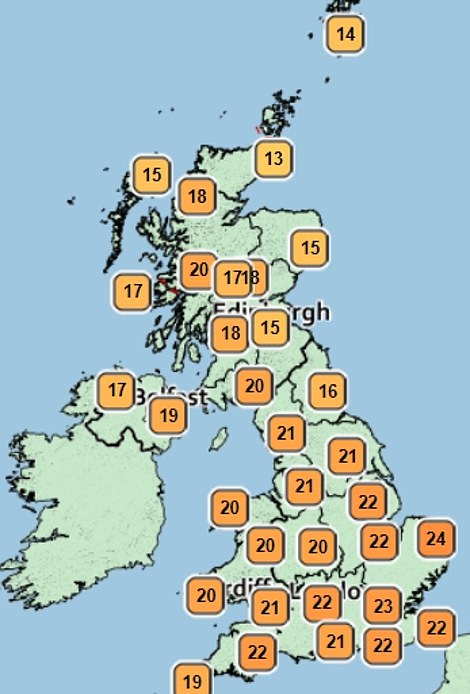 The rainfall caused the Burrow Beck waterway in Scotforth, south Lancaster, to rise by almost a metre in less than three hours, the agency’s flood risk manager Andy Brown said.

The Environment Agency said further heavy showers could cause more flooding in ‘mostly urban areas’ of England until Friday, with some homes being affected.

By tomorrow Britain’s heatwave could start to ease off for large swathes of the country.

The Met Office is predicting: ‘Still hot in the south but less so for many, particularly in the east. Breezier and cloudier in northern parts. Areas of thundery rain over the south during the day.

Heading into the weekend it is expected to remain warm, but cloudy in the South with some showers and thunderstorms.

Britain’s 11-day heatwave has resulted in lives being lost off the coast.

Between Sunday and Tuesday,