Thousands of residents have been allowed to return to their homes as weather conditions ease, but authorities have urged people not to be complacent around water following the death of a man in Sydney’s north-west.

Six evacuation orders were lifted on Wednesday, and 3000 people were able to return to their homes, but about 20,000 people remain evacuated. 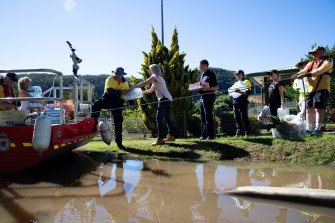 While the heavy rain has eased, clean-up efforts have only just started.Credit:Janie Barrett

“The number of people on evacuation watch hasn’t changed, so there are literally tens of thousands of people on alerts. However, we are hoping that by the end of the day that number will reduce as well,” NSW Premier Gladys Berejiklian said on Thursday.

Ms Berejiklian urged people to stay out of floodwaters, as NSW recorded the first flood-related fatality on Wednesday.

“Just because you may have heard your local river has peaked or that the worst of the rising waters may have ceased, the currents underneath the surface are very strong, the flows are doing things they don’t normally do, so please stay out of those floodwaters,” she said.

The man, from Pakistan, called triple zero at 6.20am to say the “car was sinking” and stayed on the phone for 44 minutes until “contact was lost”, police said. His body was found in a submerged car by police divers.

Detective Inspector Chris Laird said the man had been driving a new hire car north on Cattai Ridge Road, near Hidden Valley Lane on Wednesday. He was on his first day as a contractor for a large commercial organisation.

“We can only speculate why he couldn’t get out of the car,” Inspector Laird said. “Initial examinations show that he made all reasonable attempts, and that’ll form part of our inquiries as to why he couldn’t exit the car.”

NSW Police Deputy Commissioner Gary Worboys said the man’s death was the result of a dreadful set of circumstances and every effort was being made to contact his family overseas.

He said a police investigation was under way and a report would be prepared for the coroner, which would examine factors including emergency response time. 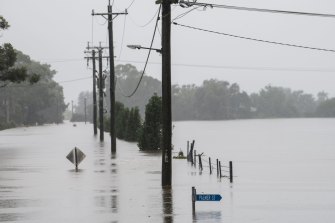 Flooding at Windsor on Tuesday.Credit:Louise Kennerley

Mr Worboys added he had been told road barriers were up in the area, some of which were underwater at the time of the incident.

“This is a graphic and tragic reminder of the dangers across our roads as this crisis unfolds,” he said.

“Good weather again today will allow us to resupply a number of areas, particularly on the Hawkesbury River,” she said. “I went out yesterday. There are many supplies being loaded on to helicopters and our boats to go out to those communities, and restocking some of those supermarkets, which is good news.” 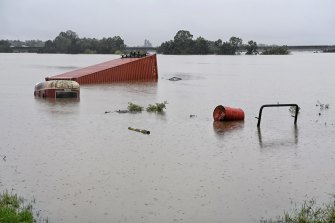 For many communities, the clean-up from the flood will take months.Credit:Nick Moir

On Thursday, a huge flood recovery operation will commence on the NSW Mid North Coast after the formation of a clean-up strike force comprising the Australian Defence Force, the Rural Fire Service and Fire and Rescue NSW.

Its first priority will be ensuring roads are accessible, making places safe for people to return, assisting with the clean-up and removing bulk waste to provide initial relief.

Mr Barilaro will travel to the Mid North Coast on Friday to start assessing the damage and the scale of the clean-up.

Firefighters, including those from the Illawarra, northern beaches and Hornsby areas, and equipment were deployed to a Port Macquarie indoor sports centre, which will act as a base camp, on Wednesday.

The teams will be deployed to the Mid North Coast region, including Kempsey and Taree, over the coming days as the water levels subside.

Bureau of Meteorology forecaster Helen Kirkup said there were a few places of concern on Thursday, particularly along the south-east which could see rainfall and thunderstorms.

She added that Moree, which was issued with an evacuation order on Wednesday, is likely to peak on Thursday morning.

Evacuation orders were issued on Wednesday night for the low-lying areas of Brushgrove and Cowper areas along the Clarence River.

Once floodwater passes 3.9 metres on the Brushgrove gauge, Brushgrove and Cowper roads will begin to close.

Catch all the day’s headlines

At the end of each day, we’ll send you the most important breaking news headlines, evening entertainment ideas and a long read to enjoy.  Sign up to The Sydney Morning Herald’s newsletter here, The Age’s here, Brisbane Times’ here, and WAtoday’s here.