These are the best water pictures from around the globe

Water world: Photographic awards reveal the best aquatic pictures from around the globe featuring thirsty ants, a fisherman in Myanmar and a boy washing in Tanzania

These beautiful photos from a stunning water-themed photo contest show the best aquatic pictures from around the world.

They include the incredible winning photo of two ants drinking from a tiny water droplet, taken by photographer Analiza Daran De Guzman in the Philippines using only a mobile phone.

She said: ‘This image was shot under our garden’s mango tree, where local ants have settled their colonies. The weather here in the Philippines is pretty hot, so I give them water and make the most of our encounter to take some macro photos.’

Other highly-commended photographs from the competition, run by the photo app Agora, include a shot of the highest waterfall in Vietnam and a bright blue tit’s reflection in water with its wings outstretched.

Other water-themed images include a boy getting soaking wet in Tanzania and a sunset flight over the waterfall of the Gods in Iceland. 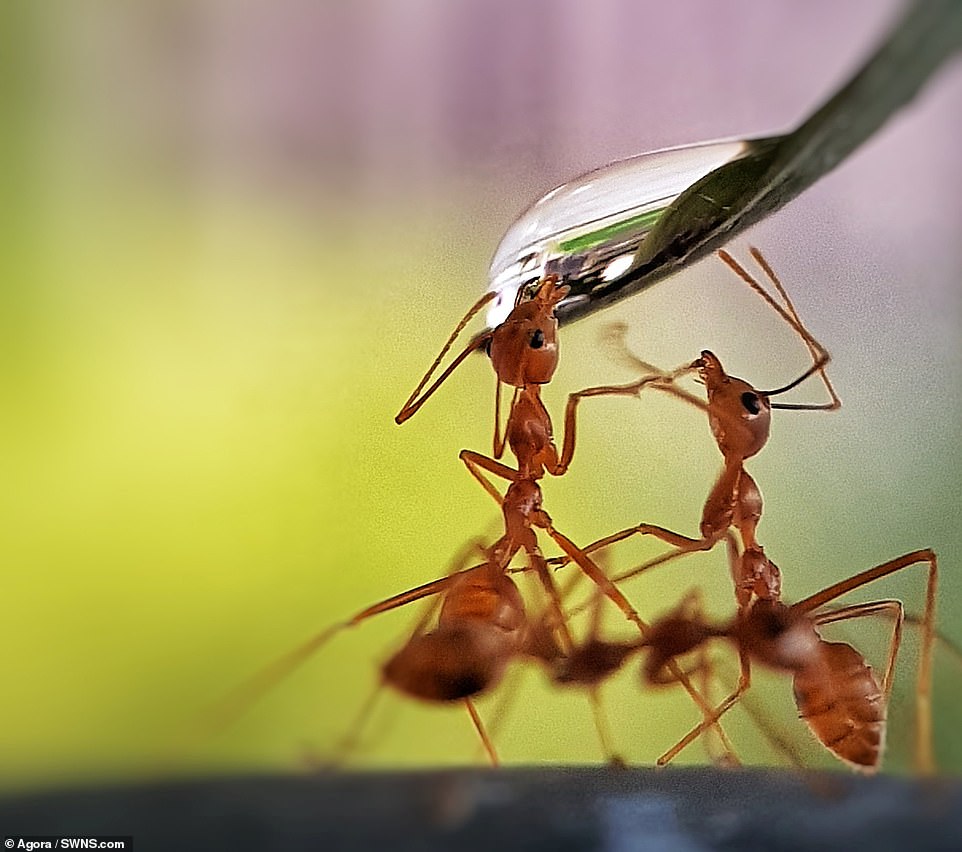 Two thirsty ants guzzle water under a garden mango tree, in a photo snapped at perfect timing by Analiza Daran De Guzman in the Philippines 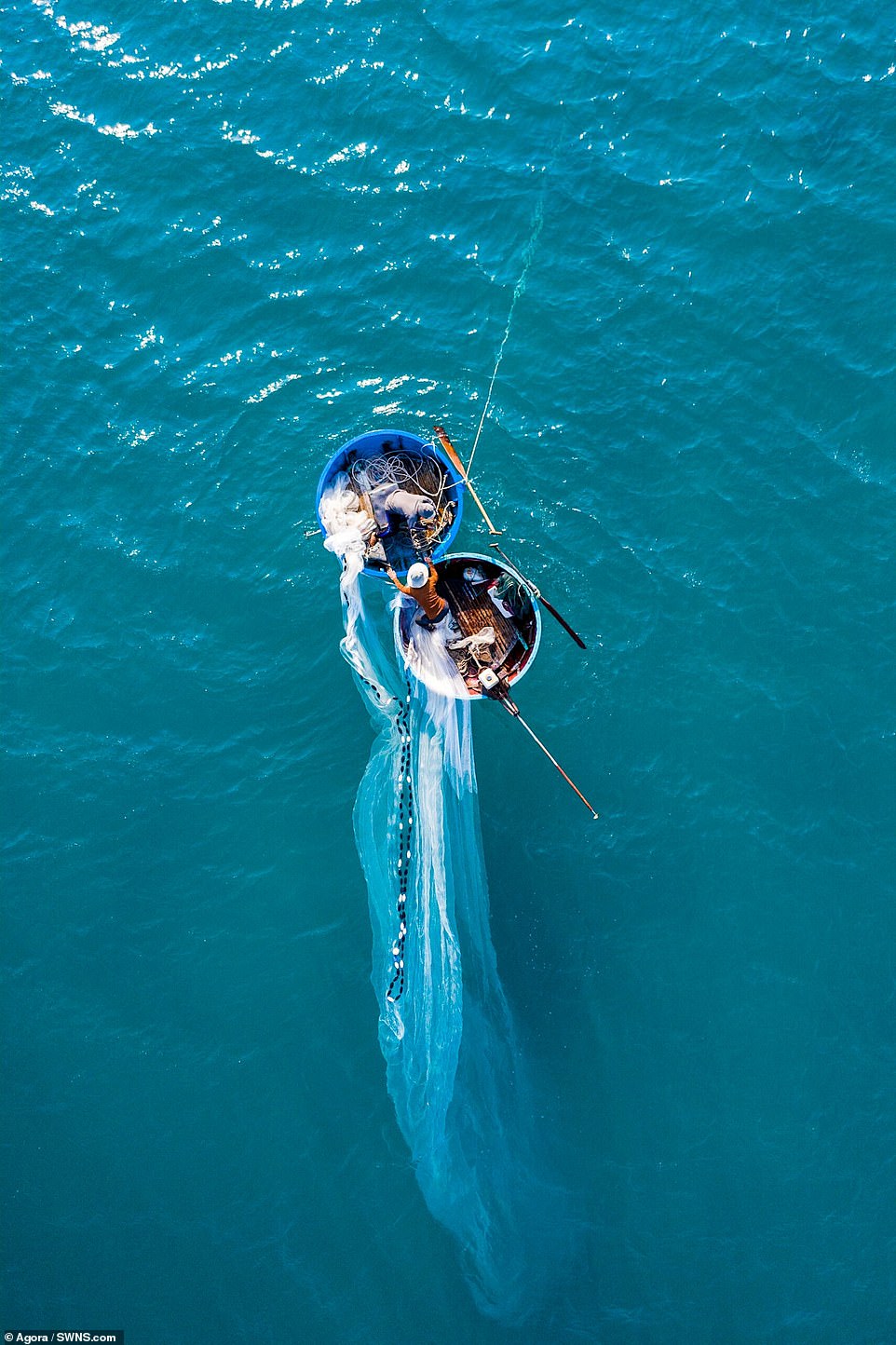 ‘Catching shrimps in the sea’ was taken in Vietnam by photographer @anhtrungqng and shows the dazzling blue water in a birds eye shot of fisherman looking for shrimp. Seafood fishing is an incredibly important industry in Vietnam, with shrimp accounting for the largest share of the industry’s export turnover 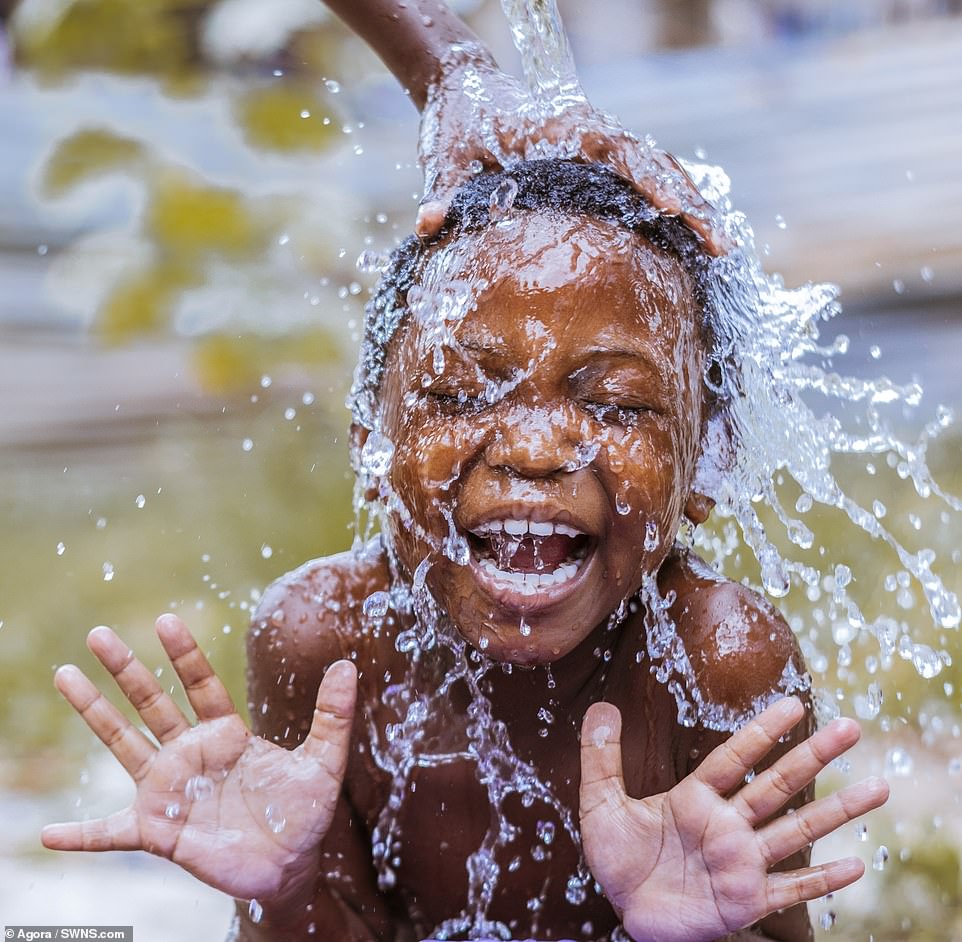 A Tanzanian child laughs in delight after getting a fun soaking in @oceantanzania’s photo, which is aptly called ‘Brings happiness to the face’ 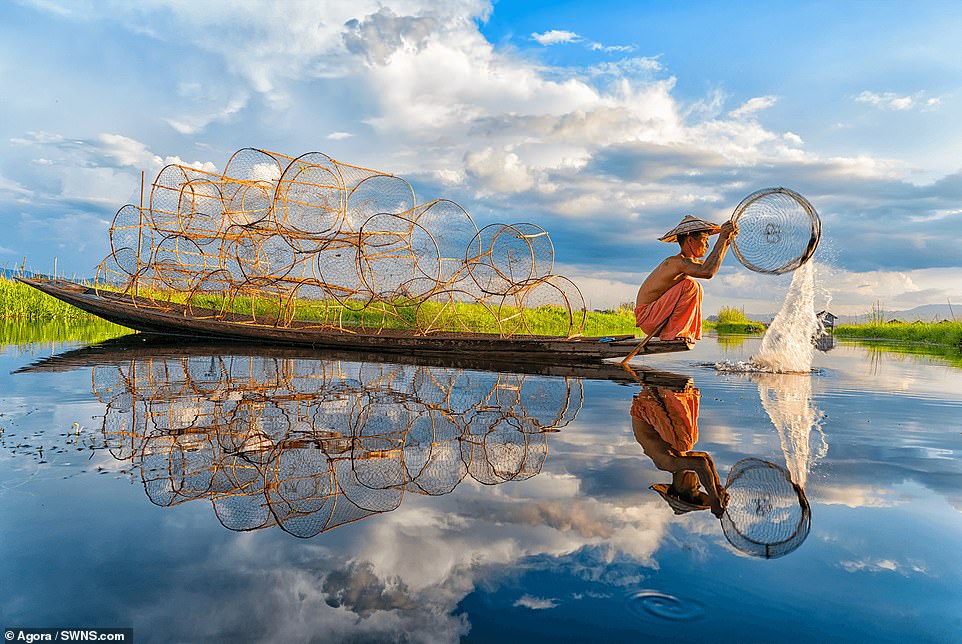 This photo, ‘Fishing’ by @caongocdiem7879, was taken after a heavy afternoon of rain in Myanmar. Native fishermen still use an age-old technique for catching fish in the shallow water, using their body to balance the boat while guiding the conical nets through the freshwater lake 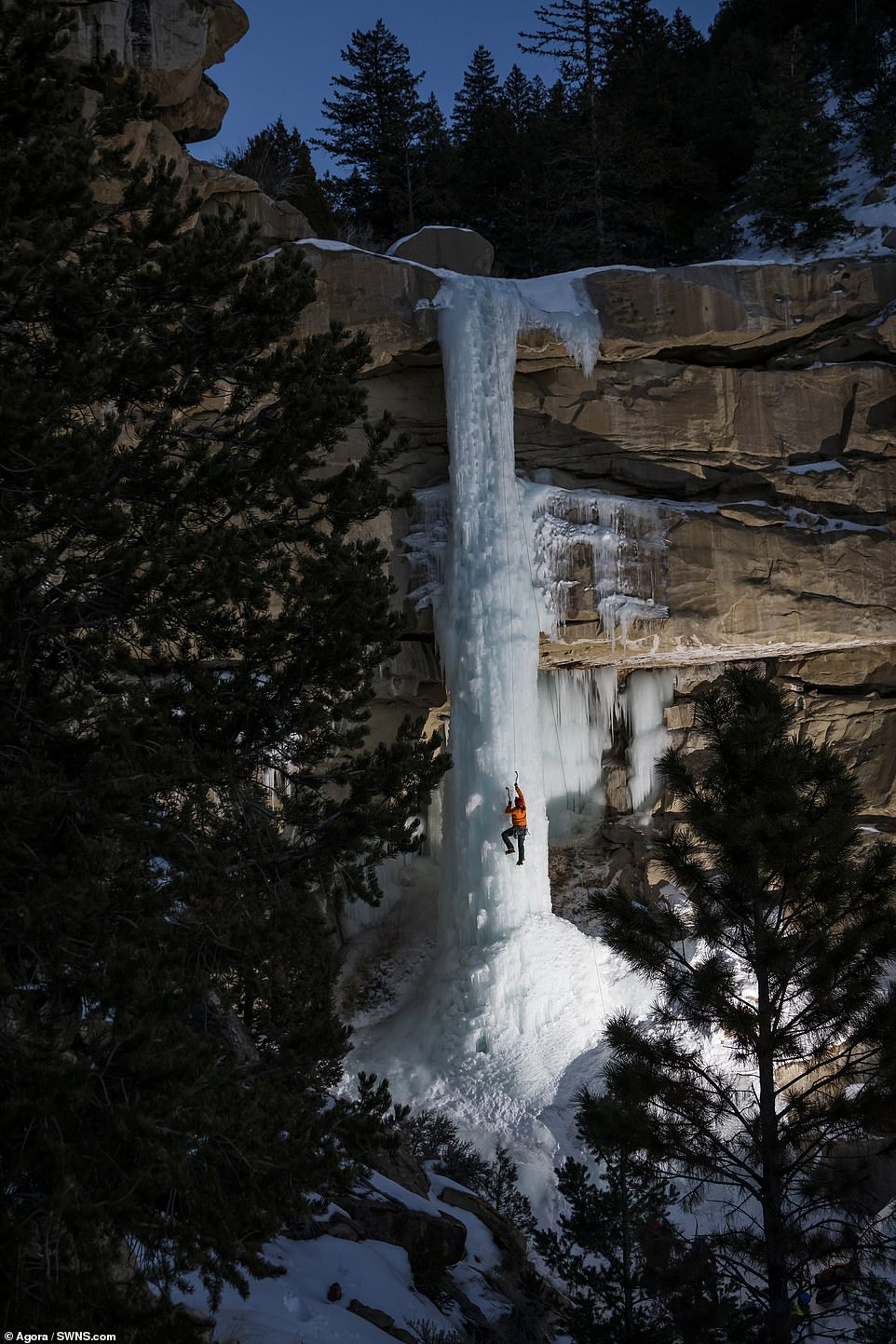 This astonishing image shows a climber clawing their way up a frozen waterfall at night in Utah. With a temperature of minus -18ºC, photographer @dmartphoto was able to snap this brave climber as he scaled up the icy wall, a popular outdoor activity in the state 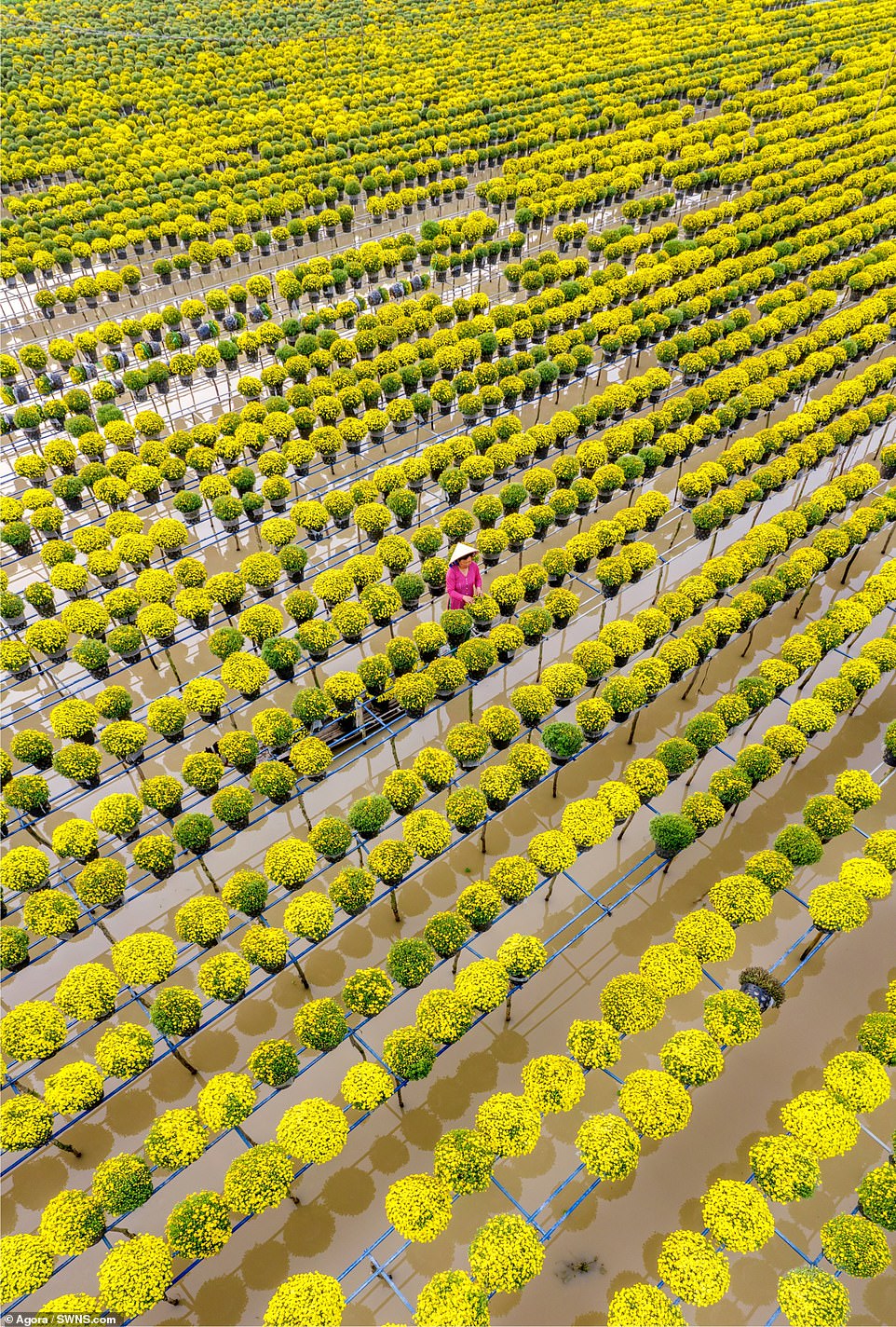 ‘Flowers on Water’ by @thuanvo has captured the stunning precision in the village of flowers from the provincial city of Sa Dec, Vietnam, located on the bank of the Tien river. It is a favourite tourist attraction year round, and is home to hundreds of flower species 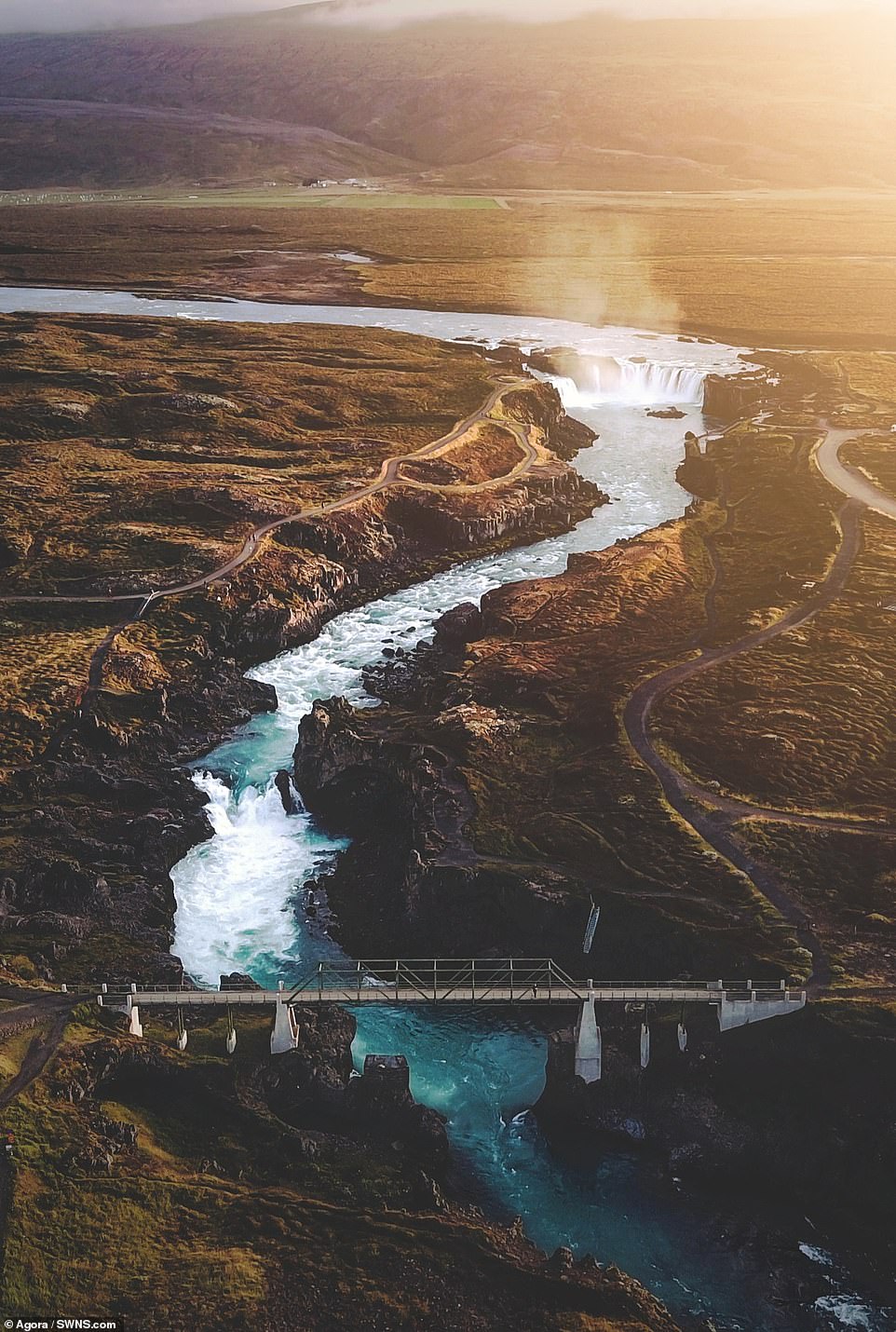 The roaring power of the Goðafoss Waterfall can be seen in @michaelfoote’s shot of ‘A sunset flight over the waterfall of the gods in Iceland’. Located along the country’s main ring road in northern Iceland, the waterfall takes its godly connection from an old Icelandic saga of a man throwing pagan statues into the falls when Icelanders had decided to convert to Christianity 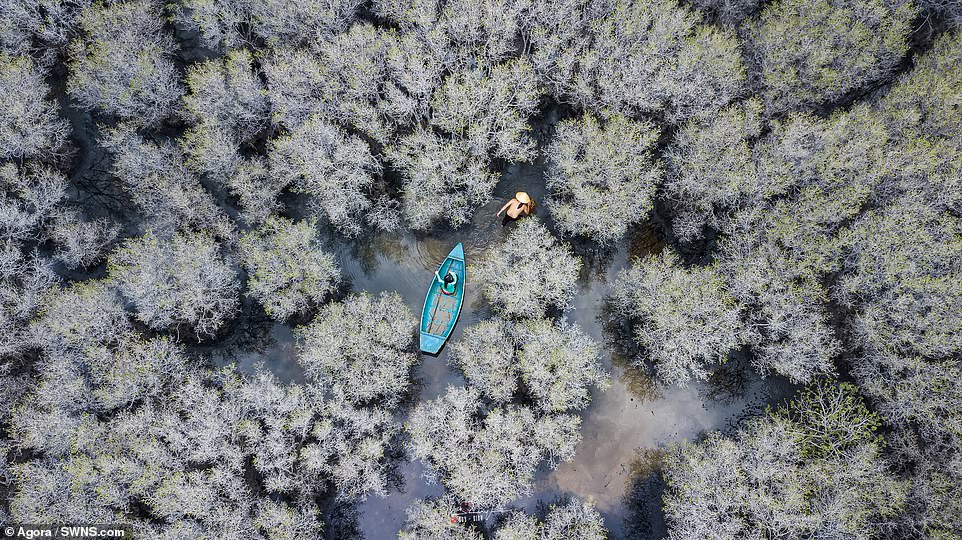 A local fisherman goes hunting in a saltwater lagoon in Vietnam in this shot by @duysinh. Fish is a main component of Vietnamese diet, with fishing is an incredibly important industry in the country. There are more than 50 species that can be found in Vietnam’s rivers and canals 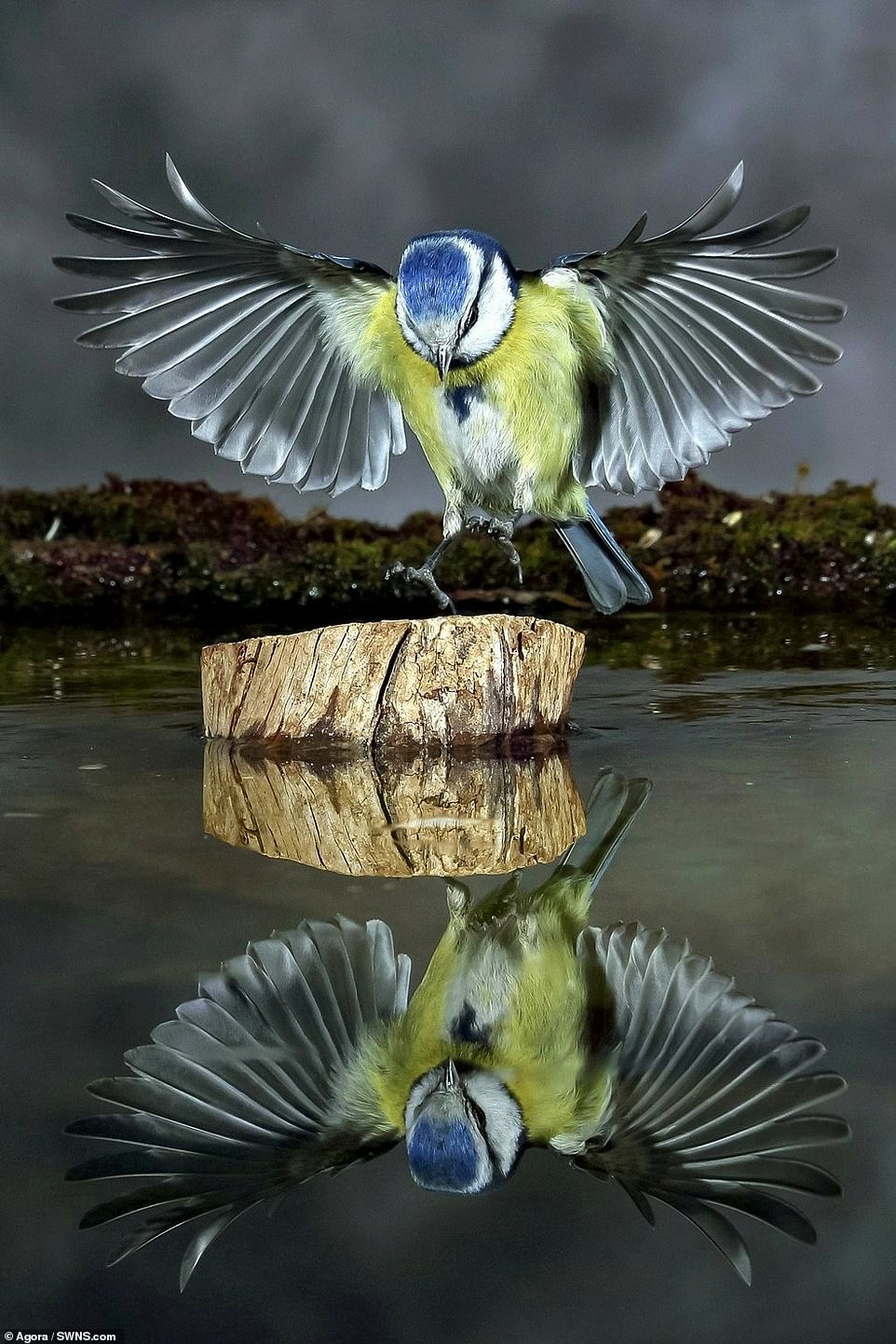 This stunning blue tit landing by @pabloboguña was captured in Lloret de Mar, Spain. Birdwatching is common activity in the Catalonian town, and it is estimated there are 232 species of breeding birds in the region 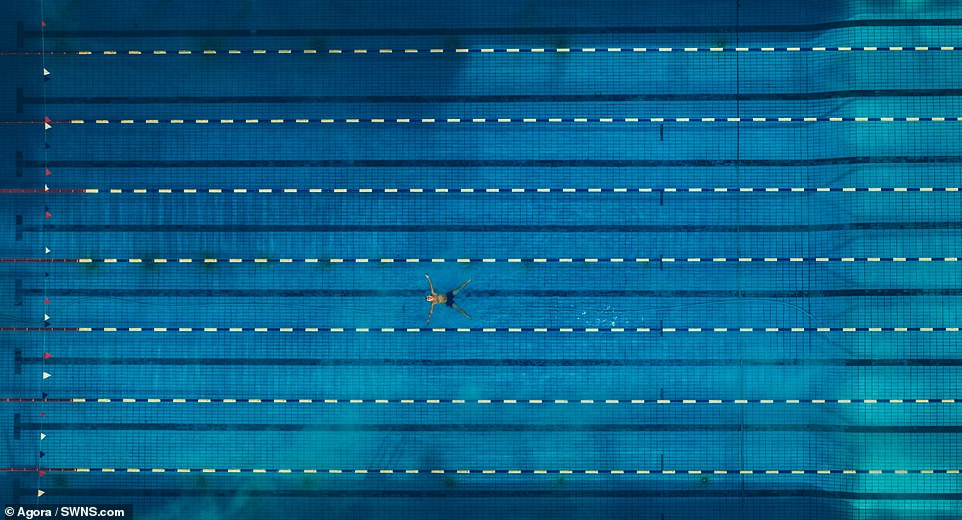 A shot of a swimming pool in Moscow, Russia, by @nickybwd 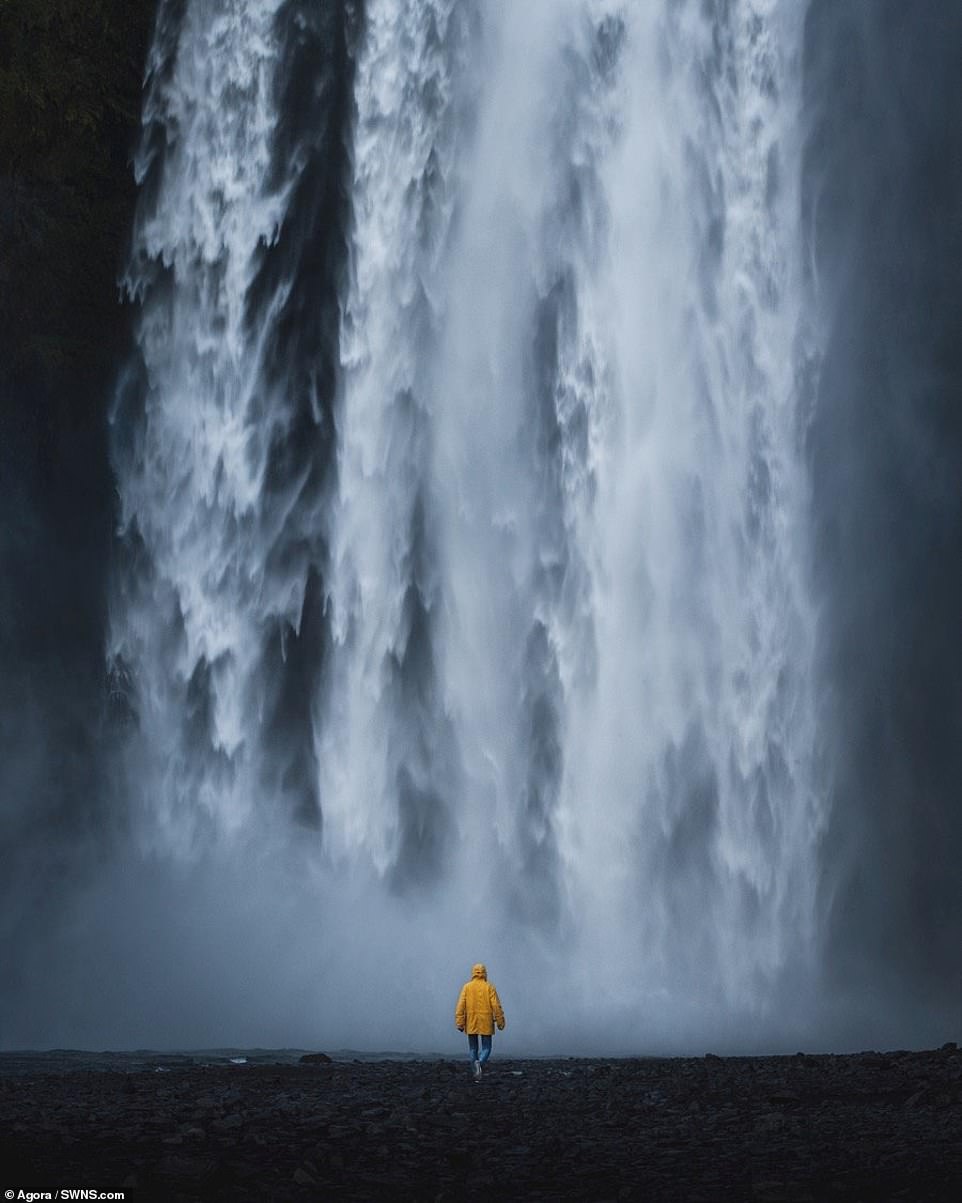 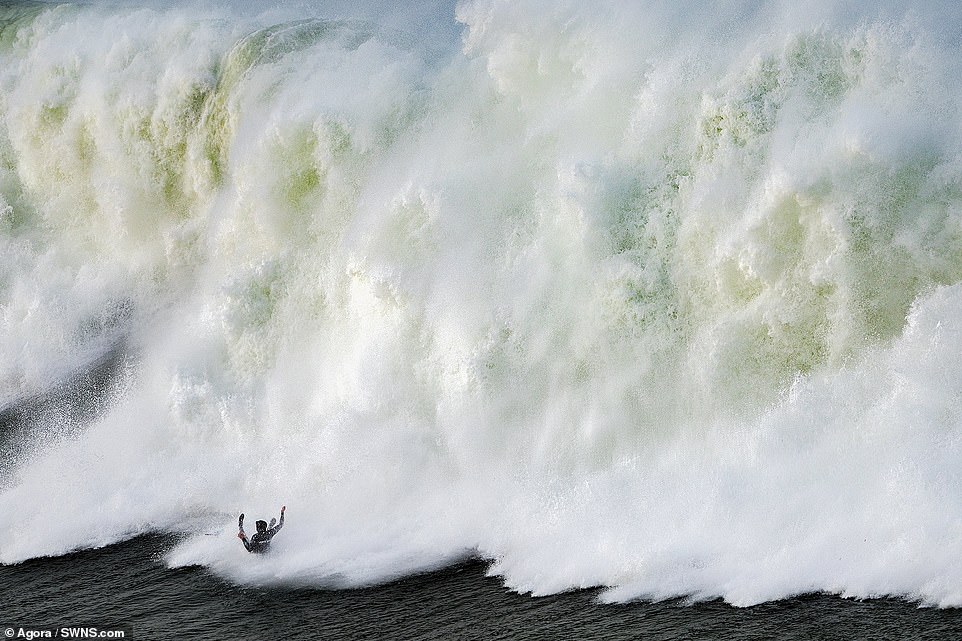 Brazilian surfer Lucas Chianca gets hits by a giant wave in a Spanish surfing competition. Although defeated by the wave in this shot from @ajuriaguerra, the surfer was unscathed and went on to win the competition 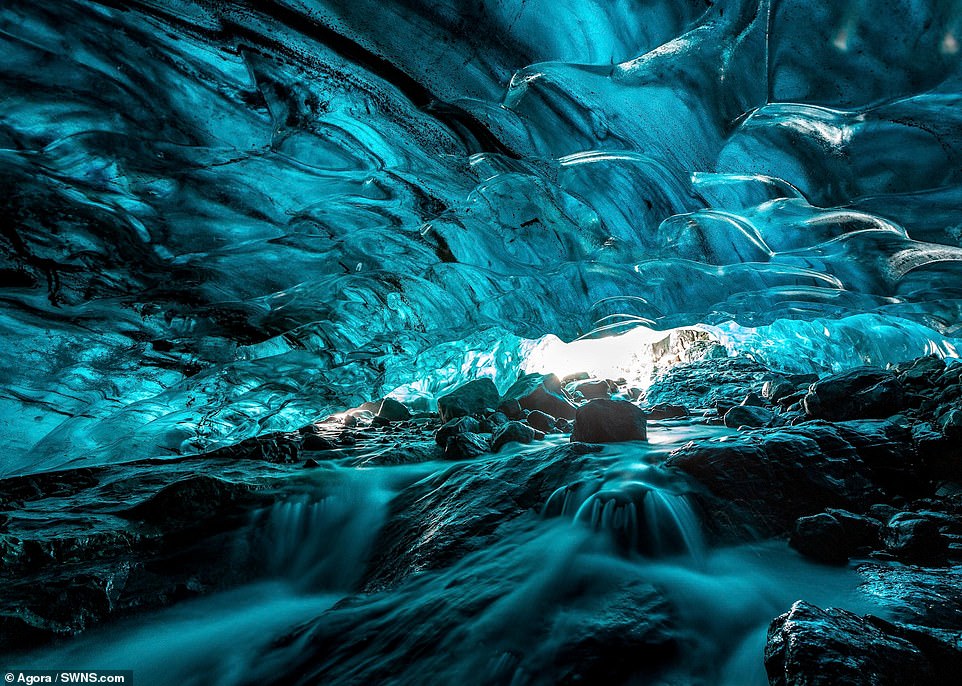 Gorgeous shades of blue in this ice cave in Iceland as captured by @ksmok. The country’s ice caves vary in colour from crystal clear ice which light can pass through easily to more opaque compositions 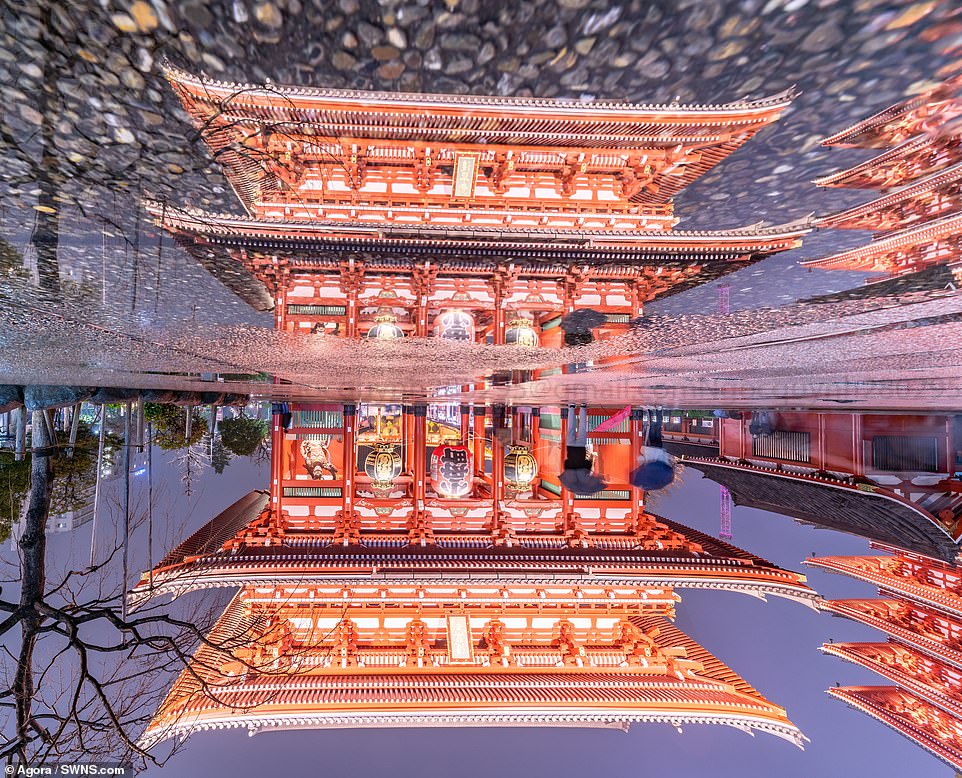 Japan’s Sensoji temple pictured on a rainy day in Tokyo. @nguyenbaongoc’s image showcases its reflection in the aptly titled ‘Rainwater’ 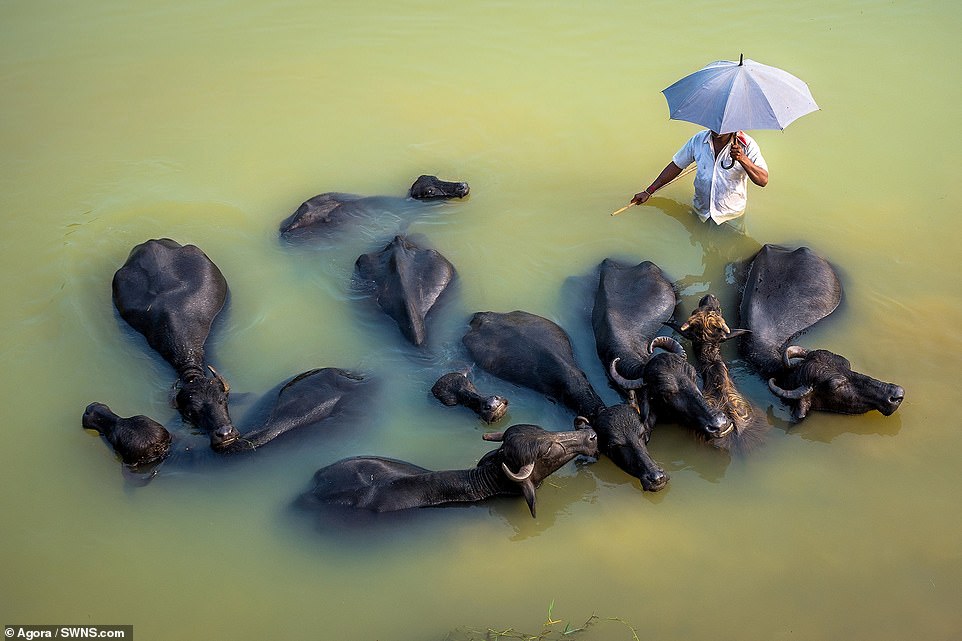 This photo showcases the ‘Life of a Buffalo Herder’ in India. Every summer day the owner takes his buffaloes for a quick dip in the river to keep them cool, as captured by @saurabh_sirohiya 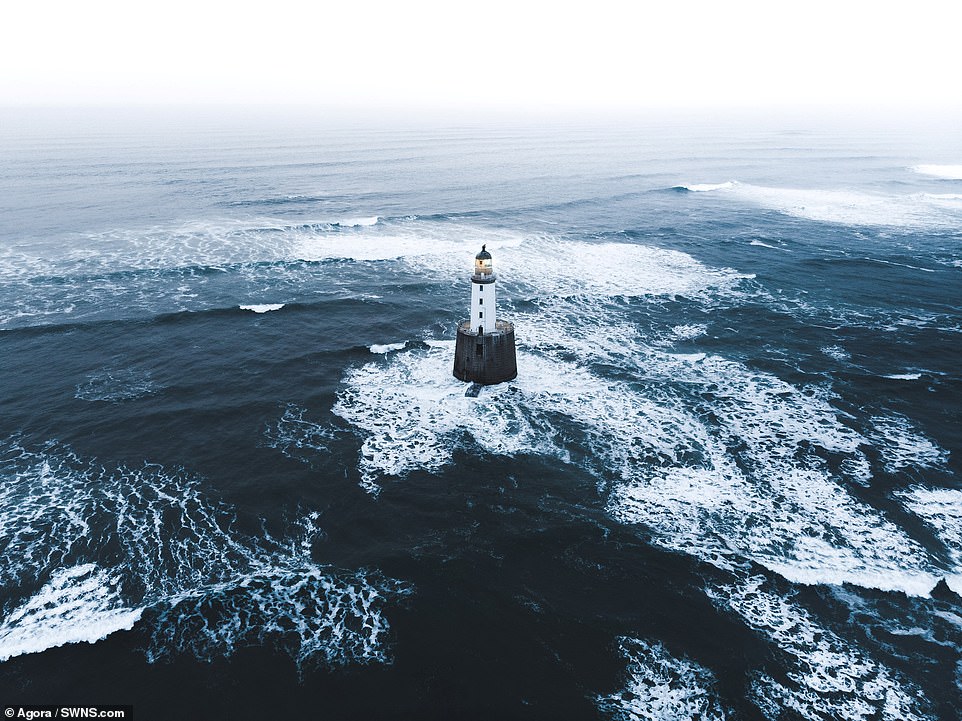 The Rattray Head lighthouse is pictured in the vastness of the ocean in Scotland in this photo taken by @anskar.  The lighthouse was built in 1895 and can be reached by a causeway that is underwater and only visible at low tide 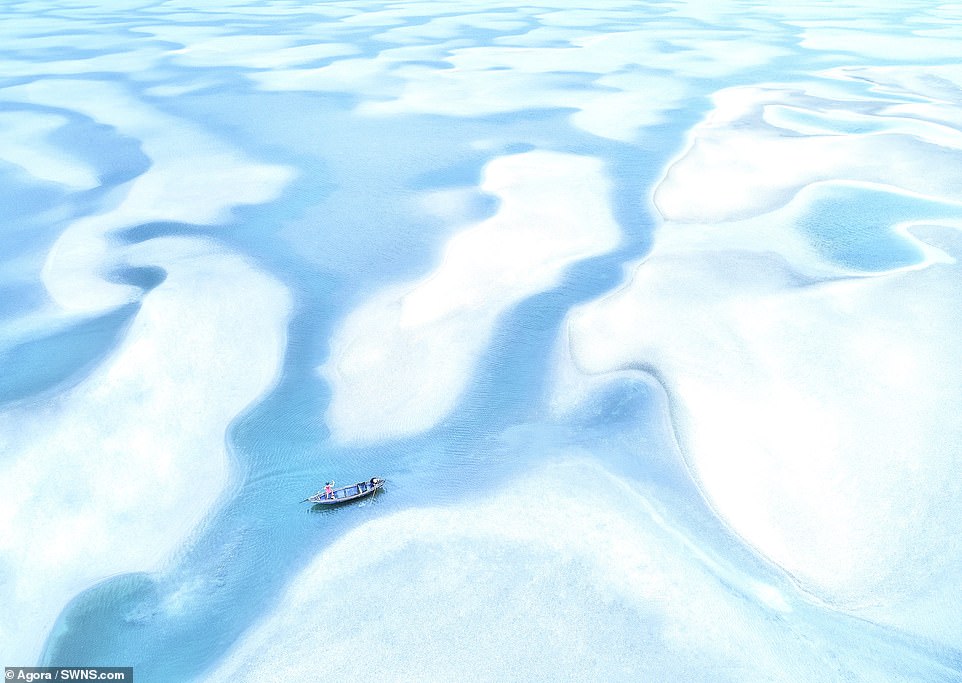 Another Vietnamese wonder, ‘Low tide day’ by @phamhuytrung highlights the delicate beauty of the white sand under the water at Lap An Lagoon Hue 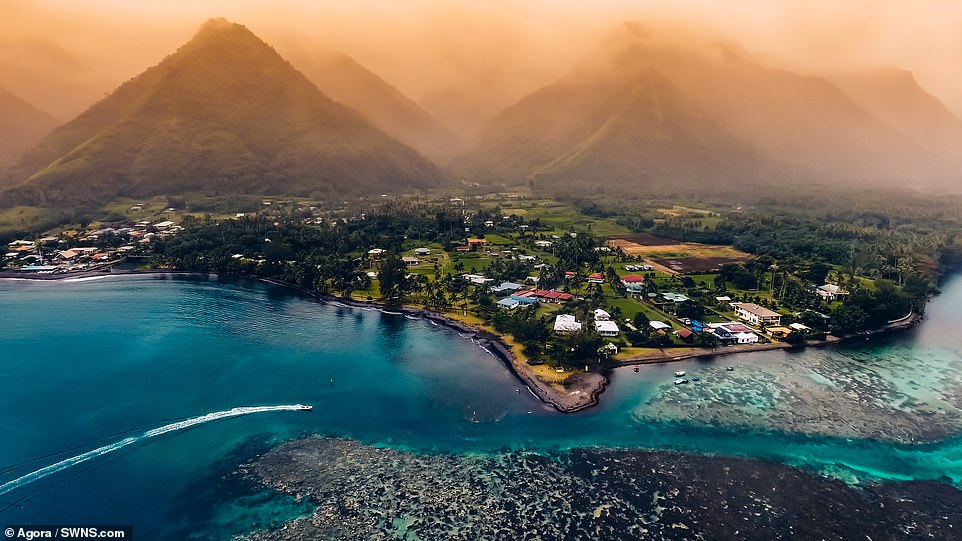 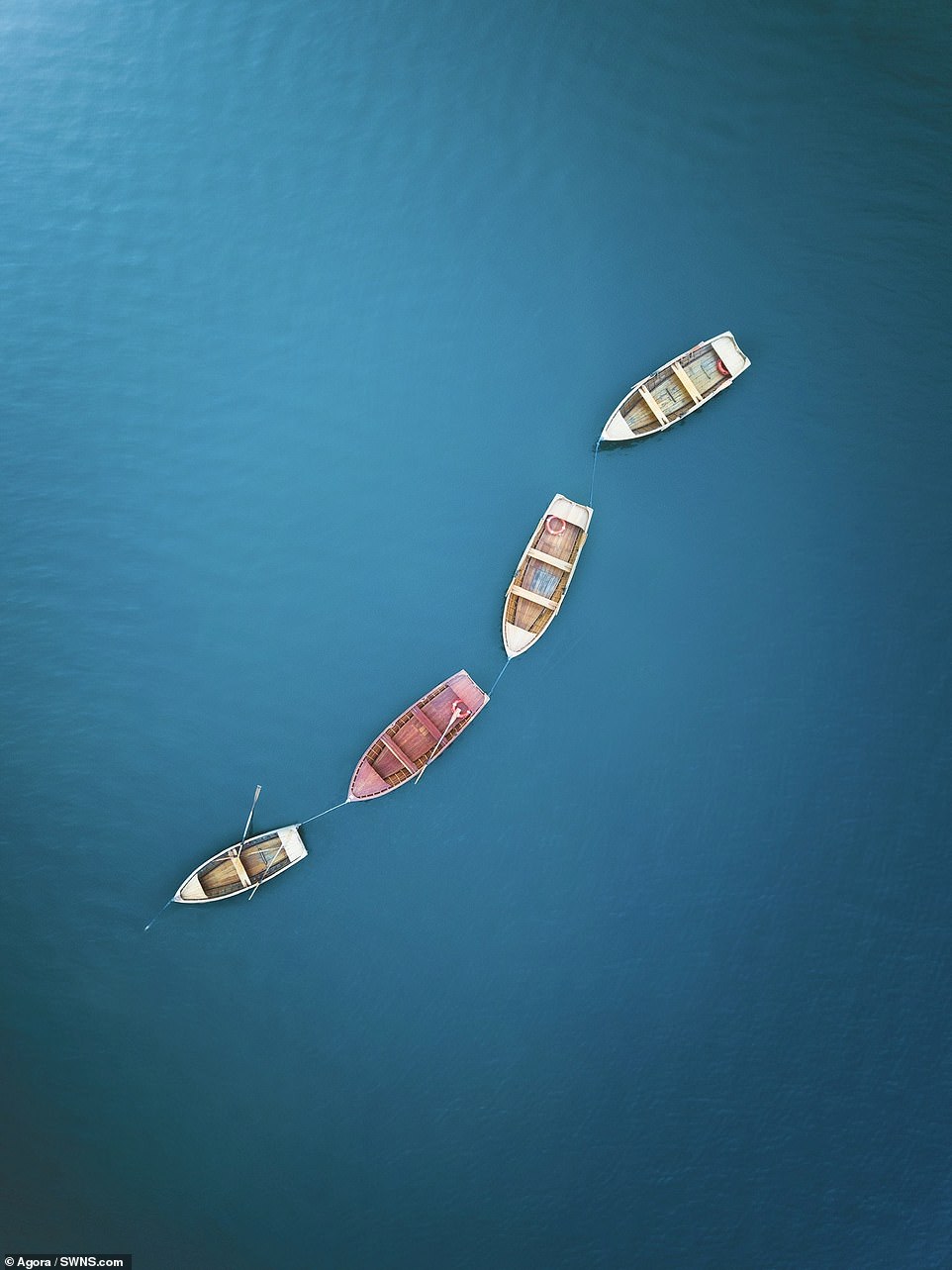 Four boats sit perfectly still on motionless water in Italy, in a shot from @alvarovaliente_called ‘Water as a canvas to create minimalistic art’ 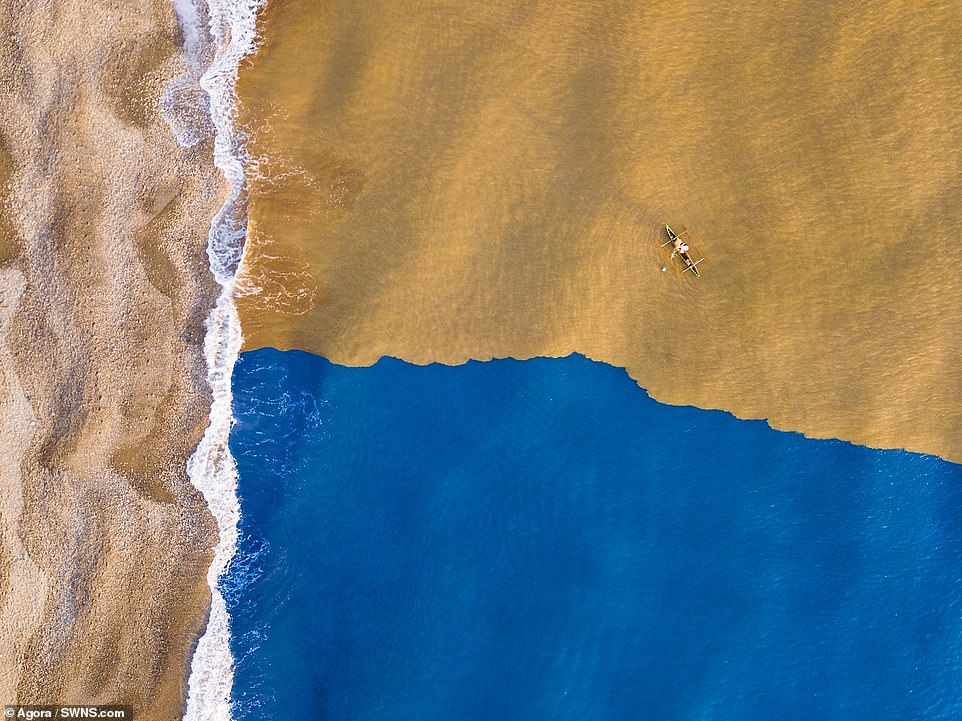 This incredible contrast shows rivers that have started to flow again, bringing mud from the mountains in Dili, Timor-Leste to the sea. The water is clearly separated in two between the brownish muddy river water and the deep blue ocean sea in @joao.galamba’s shot 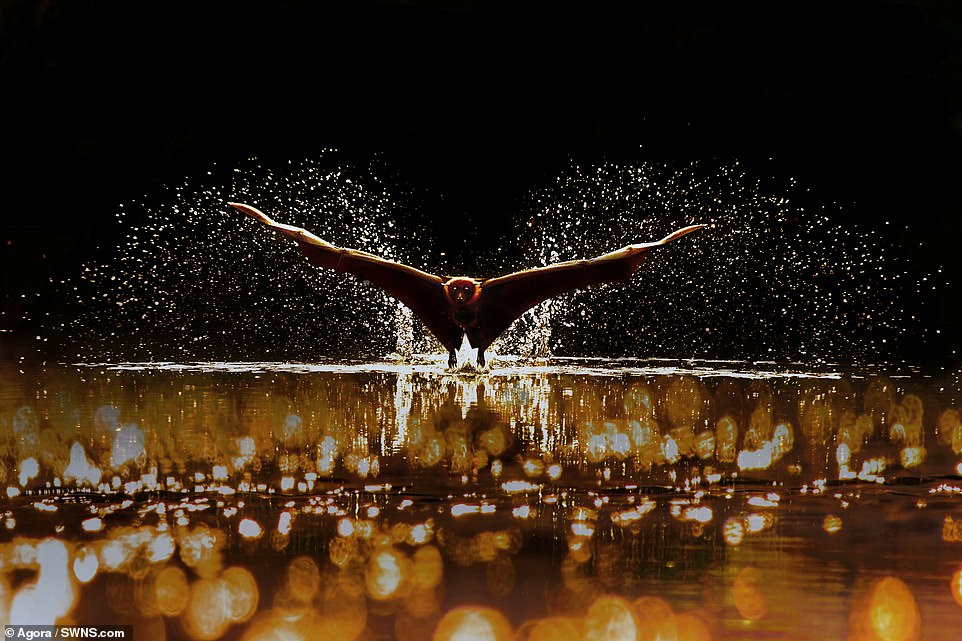 This remarkable shot of an Indian flying fox in Bangladesh, one of the world’s largest bats, was captured by @sujonadhikary. The summer heat makes their body temperature soar and every so often they will take a dive in the water to cool down 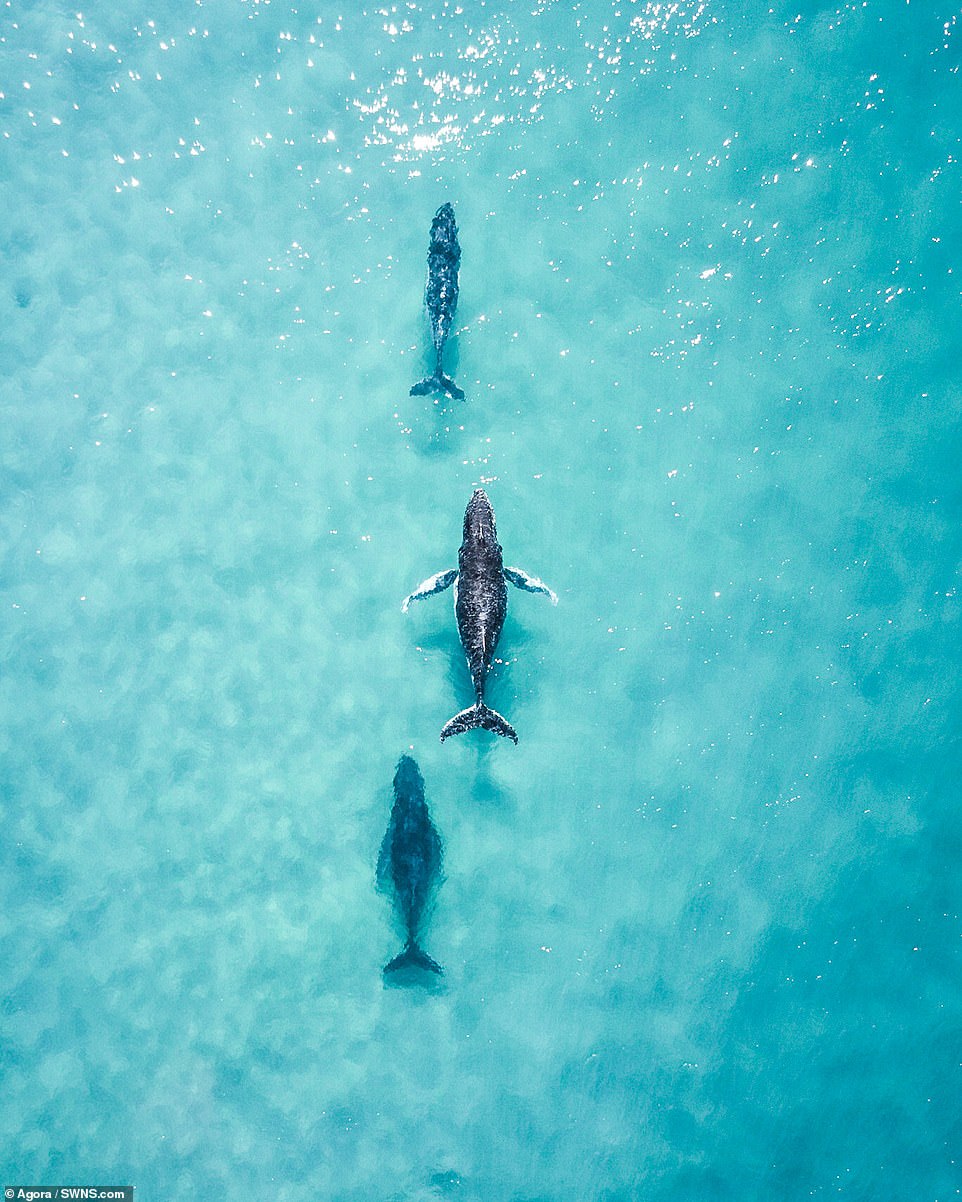 These three humpback whales were spotted cruising up the coast on their annual migration north of Fraser Island in Queensland, Australia, by @lukeylove 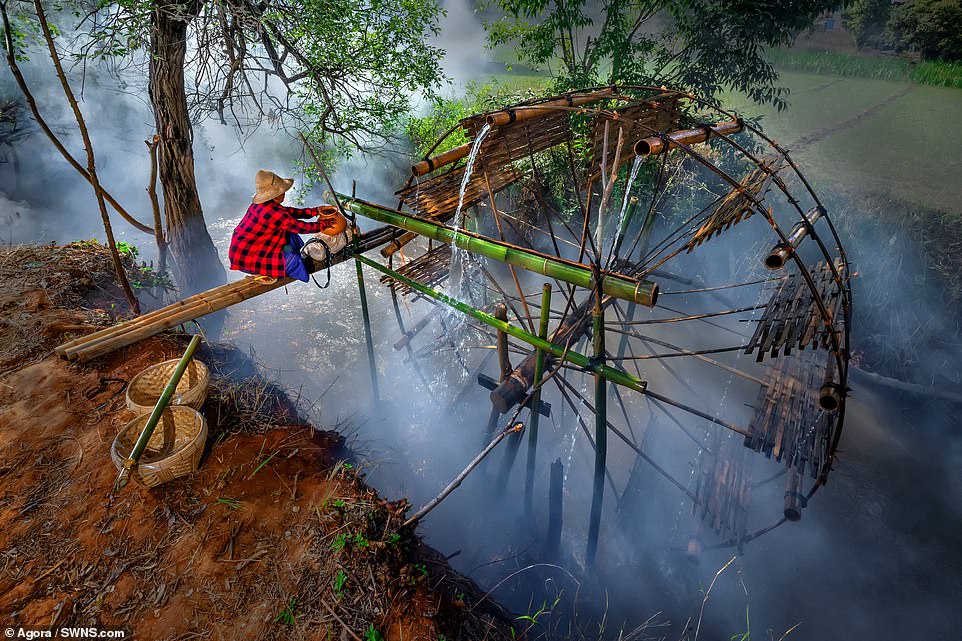 A man in Mandalay, Myanmar works in his handmade mill to collect water, as shot by @myatzawhein 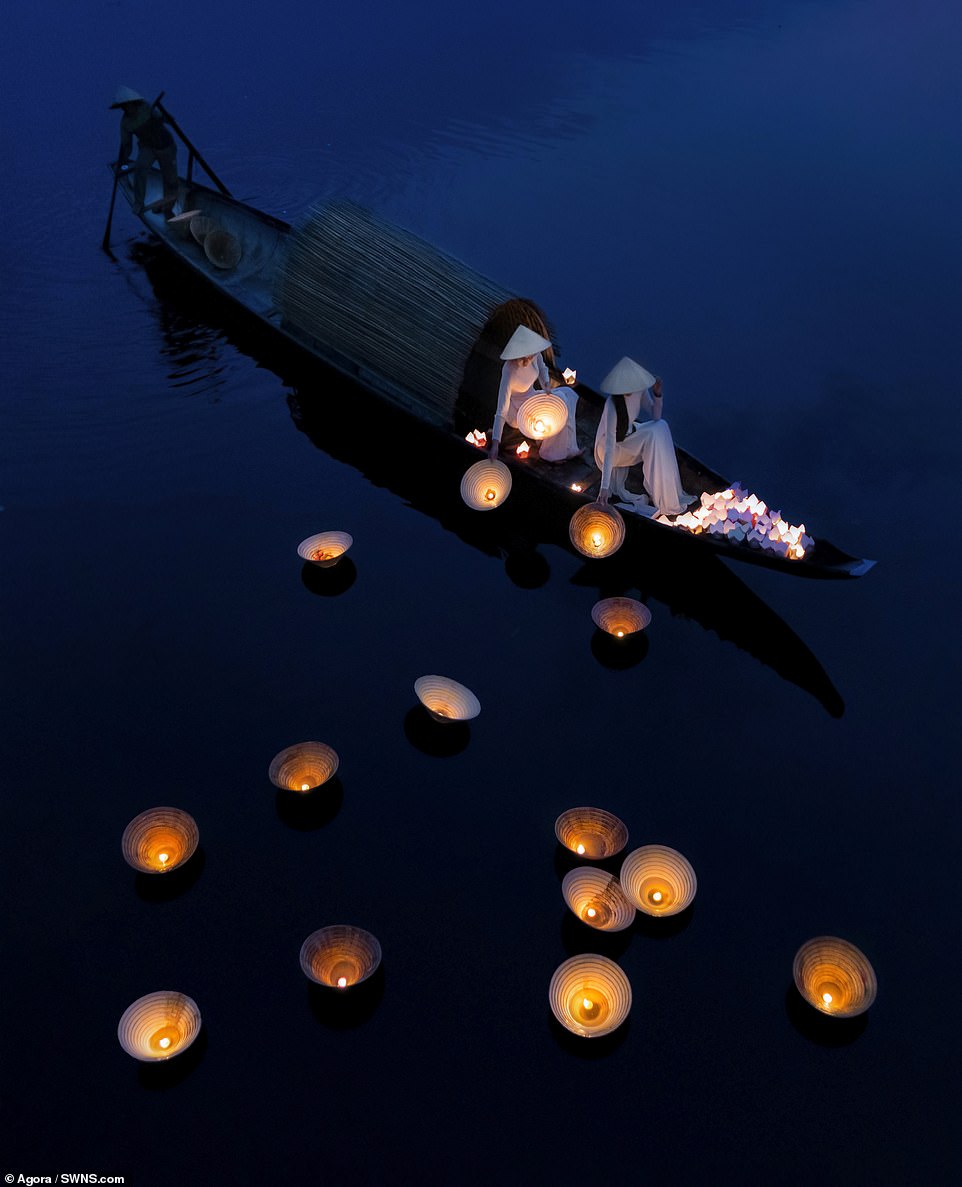 During the full moon festival, a long-standing celebration in Vietnam, people pray to the gods of water and for those who have passed away. They drop candlelights down the river to pray for their souls, as showcased in @thanhtoanphotographer’s shot 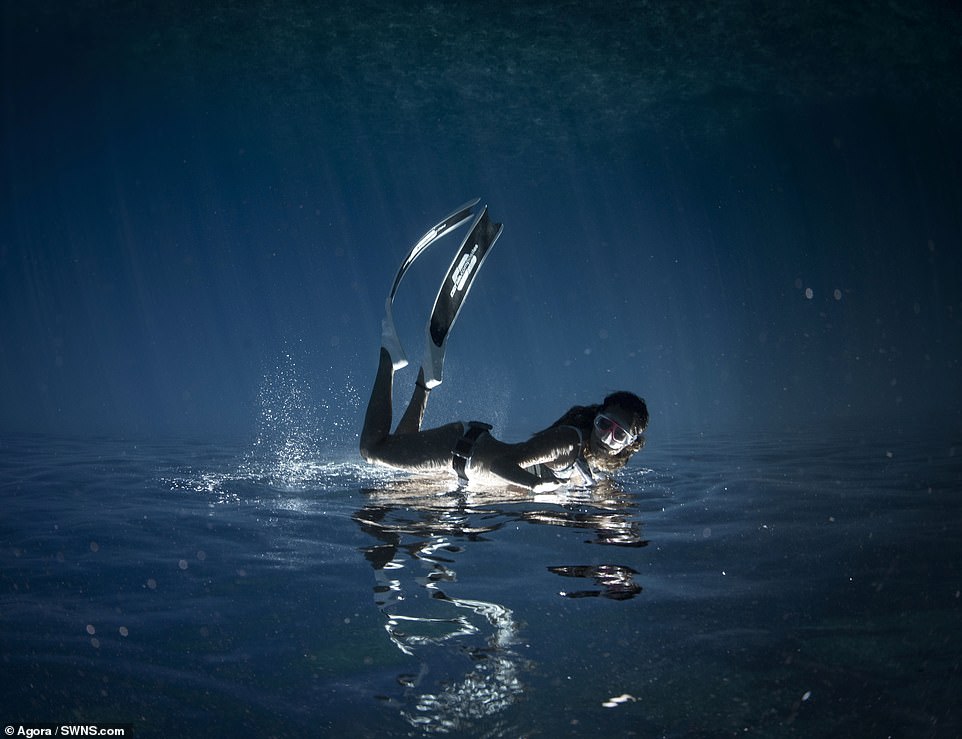 This upside down picture of a free diver in Okinawa, Japan, makes it seem like the diver is pushing downwards on a blanket of water in @Reiko.takahashi’s image 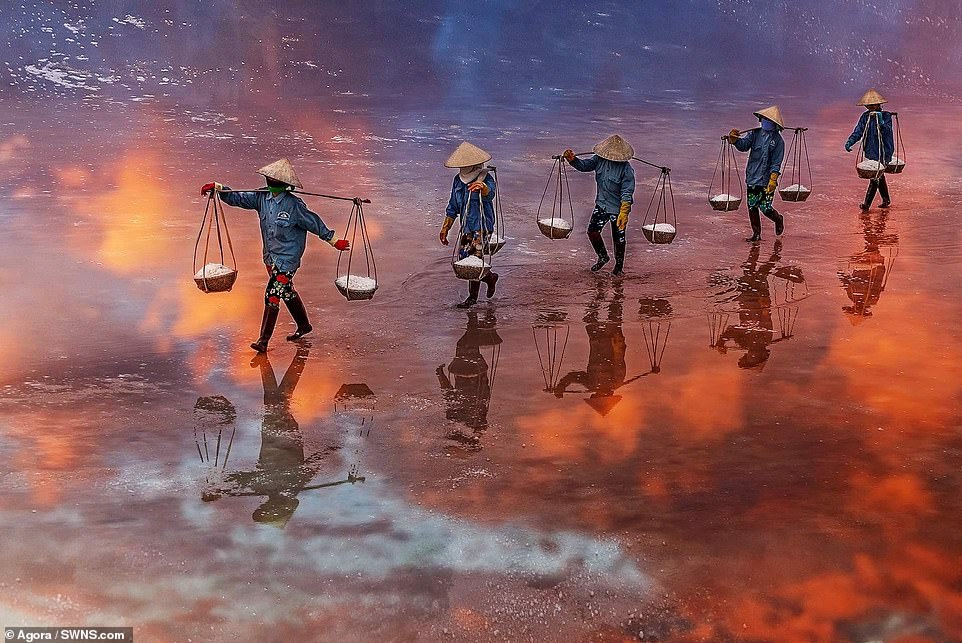 Sunset on the salt field of Ninh Diem Khanh Hoa Vietnam shows female workers who carry salt all day long in the heat of the Vietnamese sun, by @tuanngocphoto 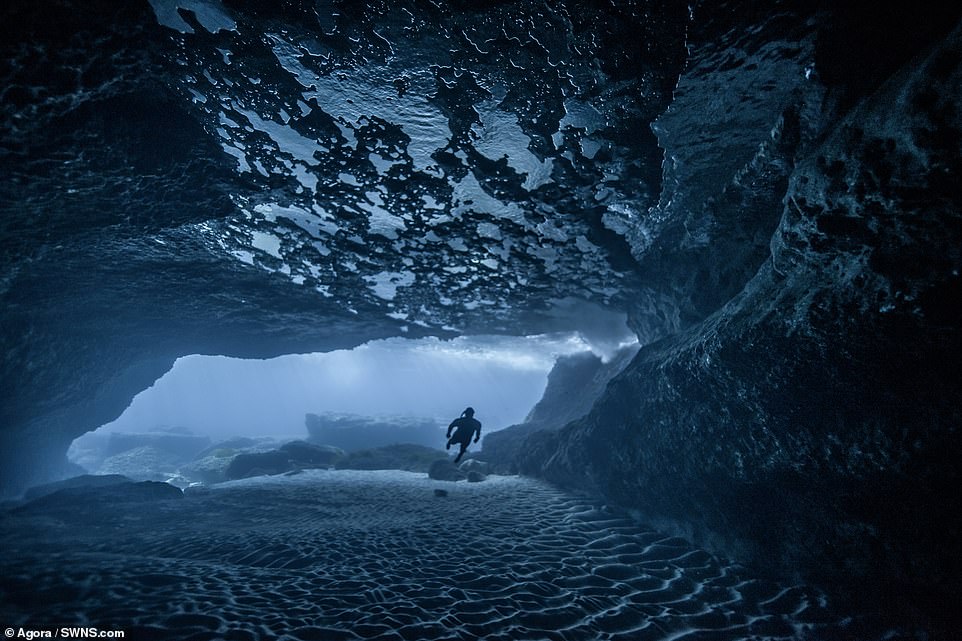 A free diver in Ferreries, Spain, goes underwater exploring in a labyrinth of caves, as shot by @victordevalles 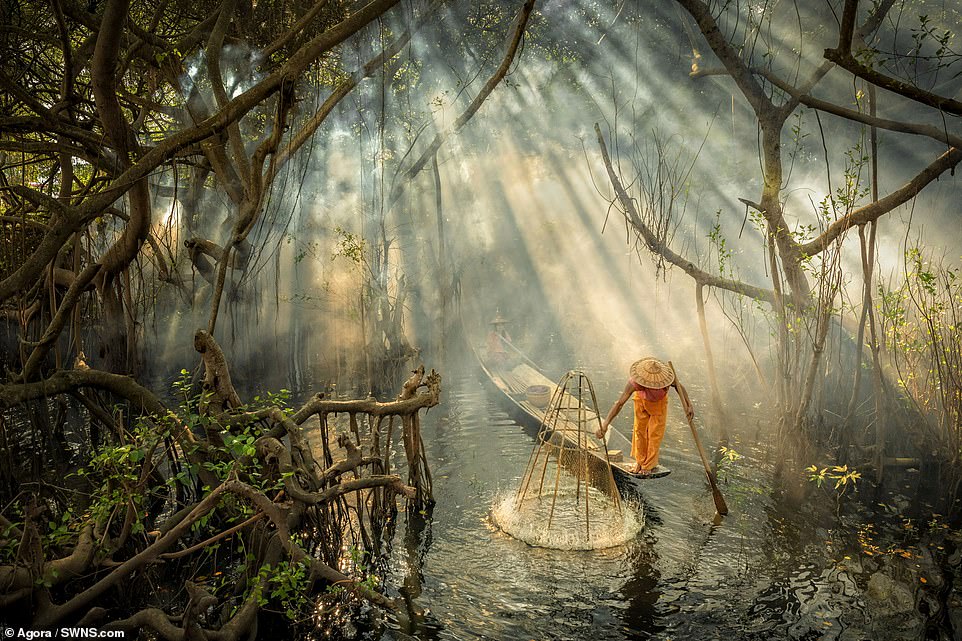 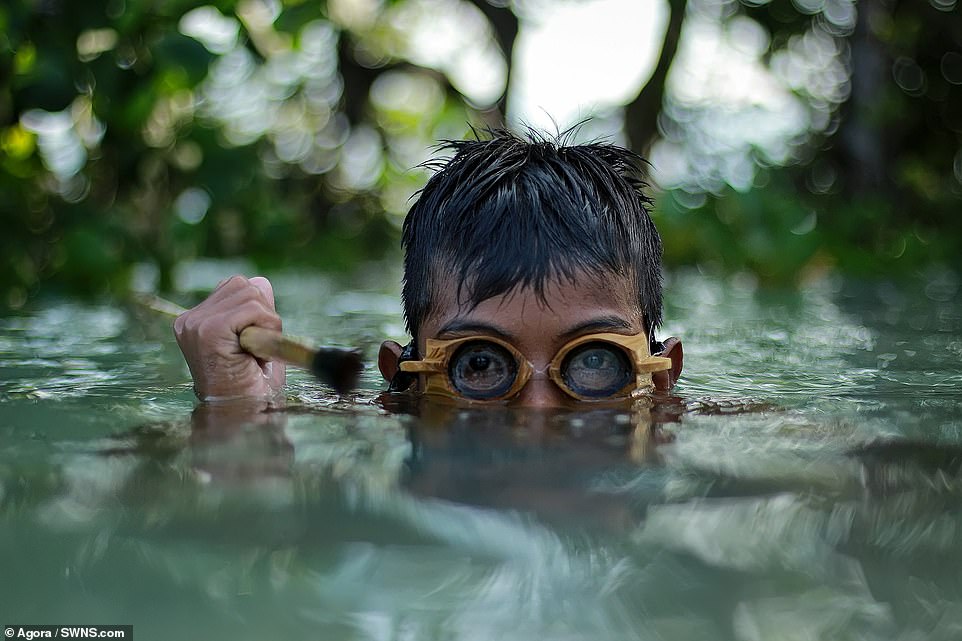 This photograph of Akbar, submerged in water, was snapped @bobbykuen. The child was hunting for octopuses to support the economic needs of his family in Indonesia