When it finally emerges from stage four restrictions, Melbourne will have experienced one of the world’s longest and strictest lockdowns.

Melburnians have already endured about four months in total under some form of stay-at-home restrictions: eight weeks from late March to early June, when the rest of Australia was also locked down, then another eight weeks on our own since July 8. 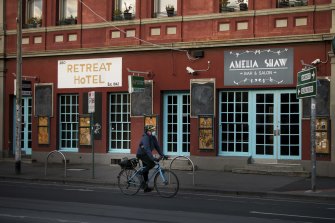 Pubs such as the Retreat Hotel in Brunswick remain closed under Melbourne’s stage four lockdown.Credit:Paul Jeffers

Should Victoria’s lockdown continue to September 28 as forecast, Melburnians will have done about five months under lockdown. But while ours has been tough, it has nothing on some other lockdowns, either for length or severity.

In the Philippines, President Rodrigo Duterte warned anyone flouting the curfew could be shot.

Pregnant women and people aged under 21 and over 60 are not allowed to the leave the house at all in the Philippines. Human Rights Watch has complained that police have been using public humiliation and abuse to enforce the rules, including locking some people in dog cages. 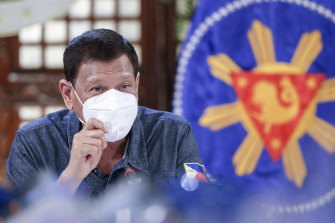 President Rodrigo Duterte warned anyone flouting curfew in the Philippines could be shot.Credit:AP

Police in Wuhan, the Chinese city where the virus was first detected, forced the ill into isolation, and in several areas banned people from going outside.

One method for making comparisons is a metric developed by the University of Oxford. Its Stringency Index measures school and workplace closures, stay-at-home orders and public transport cancellation across 180 countries.

On that scale, Australia has shot up the global rankings in the past few months. 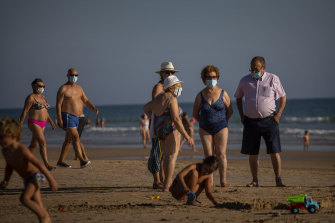 A surge in coronavirus cases in Spain has led to new restrictions on locals and foreign travellers. Credit:AP

Melbourne's lockdown compares unfavourably to other wealthy democracies, many of which eased restrictions much sooner.

Britain's lockdown started March 23; you could enjoy a warm pint at a British pub by July 4. Spain endured three months of strict lockdowns. For the first six weeks, people were banned from leaving their homes except to buy food or seek medical care – after that, children were allowed outside for one hour's playtime. Now all the bars and nightclubs are open. Italy's strictest lockdown lasted two months, during which anyone who needed to do shopping or seek medical care had to fill in a form that could be checked by police.

How Melbourne's lockdown compares to other developed nations

Spain’s lockdown started on March 15 and ended for most of the country in June.

France was in lockdown between March and May, with restrictions gradually easing after this date.

But many of those nations are now experiencing second waves. Spain, which eased restrictions in June, has reported more than 23,000 cases in three days.

Peru’s lockdown started March 16. A curfew was imposed and people were told to leave the house only for essential business. Most coronavirus restrictions were lifted at the start of July. Certain regions remain in curfew from 8pm to 4am, and for 24 hours on Sunday.

Chile announced a nationwide curfew on March 22 between 10pm and 5am, with much of the country going into lockdown soon after. In June lockdown measures were tightened, with people in the capital city of Santiago given permission to leave the house just twice a week.

In South America several countries found that curfews only slowed the spread of the virus, rather than halting it, meaning leaders were often left with no choice but to impose long-term lockdowns. Chile and Peru have been in lockdown since mid-March, and part of both remain under curfew.

Armed rebels have been imposing their own COVID-19 lockdown in Colombia.

In El Salvador, people could leave the house only twice a week, and those caught breaking the rules were taken to containment centres.

Related posts:
Cardi B calls out 'racist MAGA supporters' for 'harassing' her sister
Record-smashing heat and dramatic rescue in California as wildfires burn statewide
Popular News
‘The Bachelorette’ Promo Tells Fans to ‘Respect the Rumors’ Ahead of Clare Crawley's Season
24/09/2020
Man Utd wonderkid Ramon Calliste, called ‘the next Giggs’, now owns luxury watch business and makes £5m a year – The Sun
26/03/2020
Megan Thee Stallion Addresses Criticism Over Twerking: ‘I Love to Shake My A**’
26/03/2020
Police guard shops to stop coronavirus panic-buyers and enforce social distancing – The Sun
26/03/2020
Coronavirus: Good Morning Britain’s Dr Hilary reveals ‘game-changing’ self-testing kit
26/03/2020
Recent Posts
This website uses cookies to improve your user experience and to provide you with advertisements that are relevant to your interests. By continuing to browse the site you are agreeing to our use of cookies.Ok