London: Germany doesn't really 'do' leadership instability. Not like Australia, anyway. Since 1982 Europe's largest economy has had just three chancellors while Canberra churned through 10 prime ministers – seven of whom have come and gone since Angela Merkel rose to power. No wonder she had to glance at a cheat sheet before meeting Scott Morrison in 2018.

But Merkel's time is nearly up and the starter's gun on the race to replace is being fired this Saturday. Merkel – who grew up in East Berlin and went on to become one of the most influential world leaders of the modern era – will retire by September after nearly 16 years in office.

"Angela Merkel and Jacinda Ardern are two of the greatest ever role models of female political leadership," says Lucy Turnbull, the Sydney businesswoman who was awarded the German Cross of the Order of Merit for forging stronger links with Berlin. "Angela is strong, decisive and has a deep understanding of cultural and historical values. Her life represents an extraordinary arc of history." 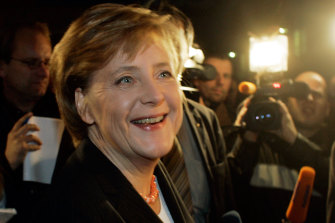 German Chancellor Angela Merkel as her victory was announced back in 2005. Since then seven Australian prime ministers have come and gone. Credit:AP

Merkel, the leader of the centre-right Christian Democratic Union since 2000 and Chancellor since 2005, announced during a rocky political period in late 2018 that she would immediately step down as party leader and not contest the 2021 election.

Her protege Annegret Kramp-Karrenbauer, Germany's defence minister, abruptly resigned as leader of the CDU last year in a move which derailed the Chancellor's succession plan and opened the door to a trio of men who are considered ambitious but uninspiring. Merkel was always going to leave big shoes to fill but she might have hoped the candidates started with slightly bigger feet.

About 1000 CDU delegates will meet virtually this weekend to vote on a new party leader – a position which would make them the frontrunner to contest national elections in September. 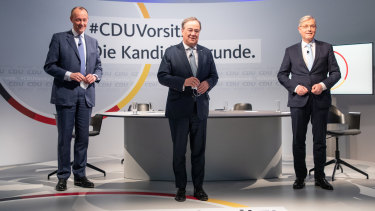 Friedrich Merz, Armin Laschet and Norbert Röttgen during a recent debate ahead of the CDU leadership election. Credit:Getty

Merkel kicked Roettgen out of her cabinet after he suffered an embarrassing defeat in state elections, but he has rebuilt and chairs the Bundestag's foreign affairs committee. His popularity with CDU voters has climbed recently thanks to a smart digital and advertising campaign.

The conservative Merz is the most likely to challenge Merkel's repositioning of the CDU towards the political centre. He only narrowly lost the CDU leadership to Kramp-Karrenbauer, Merkel's protege, in 2018, and enjoys strong support from members who think the party should tackle head-on the growing support for the right-wing nationalist party Alternative for Germany.

Sophia Besch, a senior research fellow at the Centre for European Reform, says CDU delegates are not just picking a new leader but also casting a vote on the future of conservatism in Germany.

However it is possible neither Laschet, Roettgen or Merz end up contesting the national election because becoming leader of the CDU doesn't guarantee the right to be its candidate for chancellor.

Whoever wins the leadership race this month (it will go to a runoff between two candidates if one doesn't win a majority) will have to negotiate with the leader of the CDU's Bavaria-based sister party, the Christian Social Union, over who contests the September poll. 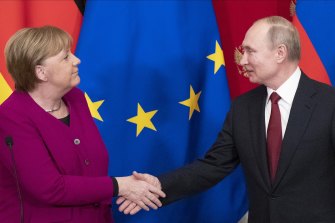 The absence of a clear CDU frontrunner injects huge uncertainty into what the contest means for German domestic policy and its approach to Europe. Former Australian prime minister Malcolm Turnbull says one of Merkel's great skills was dealing with Russia.

"Her understanding of and relationship with Putin I always found very interesting," Turnbull says. "They were both in Germany when the wall came down. For Merkel it was the opening up of opportunities and freedom and a hugely positive event, for Putin it was, as he always says, one of the greatest disasters of the 20th century.

"The German-Russia relationship is one of the key dynamics in Europe. The Germans look east and west and always has done but she has a much more finely tuned understanding of Russia and Putin in particular than most western European politicians."

Karel Lannoo, the chief executive of the Centre for European Policy Studies, thinks Germans and Europeans won't really know what they had in Merkel until she's gone.

"She is remarkable," Lannoo says. "And people do not sufficiently realise what an important stabilising factor she has been for the past 15 years. This is a very important moment."