The scandal-plagued Thai minister who spent time in an Australian jail for drug importation has been forced out of his cabinet post after succumbing to an internal party brawl.

Thammanat Prompao, a former factional heavyweight in the coalition government who once served as a bodyguard to the Thai royal family, said he was upset over rumours he was plotting to undermine Prime Minister Prayut Chan-o-cha.

He was reported to have tried to broker an alliance with an opposition party to oust Prayut, and alienated members of his own party in the process. Prayut survived a censure motion on Saturday, with rumours the PM was offering up to $200,000 per vote – a claim he denied. 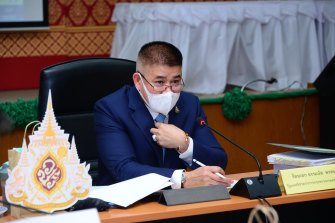 A decree from the Prime Minister said that King Maha Vajiralongkorn agreed Thammanat and another minister should “leave” for the betterment of the country.

Thammanat said he was unhappy with politics and was hoping to return to his northern province and work for the people.

Thammanat was ousted two years to the day since The Sydney Morning Herald and The Age revealed he spent four years in a Sydney jail in the 1990s for his role in trafficking 3.2 kilograms of heroin into Australia. 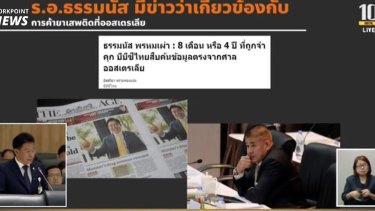 The Age’s front page from September 9, 2019, is shown during a censure debate against embattled Thai minister Thammanat Prompao, right, in Parliament in Bangkok, last year.Credit:Facebook

He pleaded guilty and was deported on his release from Parklea prison.

But he has spent much of the past two years telling a different version of the story to the domestic Thai audience.

After initially denying being jailed in Australia, Thammanat’s version of events shifted several times since this masthead uncovered the Sydney court files that revealed the extent of his involvement in the heroin-trafficking operation.

He claimed in the Thai Parliament to have been a witness in “state-sponsored accommodation” and, during a censure motion that he survived, forcefully declared he was arrested with flour not drugs. 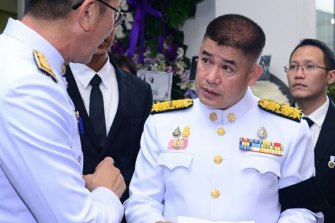 Court records show Australian federal police had swapped the 74 per cent pure heroin with an inert substance before they stormed the Bondi hotel room where the deal went down.

Thammanat was a young soldier known as Manat Bophlom at the time of his arrest in 1993.

After he was released from Parklea prison and immediately deported, he rejoined the Thai army under a different name. He has gone by at least four identities and had a colourful life in the army and business before entering politics.

After the Herald and Age’s 2019 revelations about Thammanat’s past, questions also emerged about whether his PhD came from a fake university, and evidence surfaced that large parts of his doctorate had been plagiarised. At the time, the Prime Minister defended Thammanat and said the Australian jail time was a “small matter”. In the blizzard of negative publicity, Thammanat threatened to sue 100 people.

The political scandal swirling around Thammanat since the revelations went all the way to Thailand’s highest court.

The Constitutional Court ruled the conviction was no barrier to keeping a cabinet post, his four years in a Sydney jail was not a breach of the Thai constitution.

Until he was ousted on Thursday, Thammanat was a key ally of top generals in the coalition government and helped secure a large number of votes in crucial elections.