A teenage passenger met his match when he was body-slammed to the floor by a train driver, after punching a rail worker who asked to see his ticket.

Passengers on the South Western Railway service from Farnham to Ascot witnessed the altercation at Bagshot railway station in Surrey in late February.

The teenage passenger had been asked to leave the train by an inspector after he refused to buy a ticket, according to witnesses. 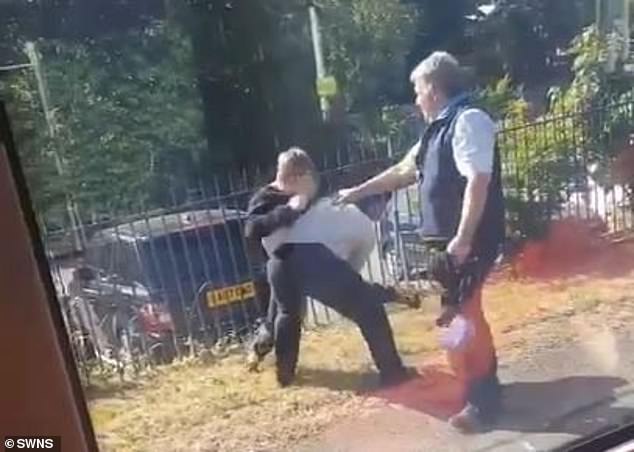 Footage, filmed by a passenger in February, shows a rail worker, who is said to be the driver, picking up the teenager as he intervenes during the incident at Bagshot Station, Surrey

They claim the boy then got aggressive when he was asked to step off the train and is said to have pushed and sworn at an inspector.

The teenager is reported to have then punched him before stepping off the train.

Onlookers say the train driver then intervened but the passenger continued his behaviour.

A college student filmed the moment the train driver then picked the boy up.

Footage shows the employee slamming the teenager into the ground, while he is heard telling the boy ‘relax yourself’ as he gets to his feet and leaves.

The rail firm said they ‘would always advise against physical contact, but the driver in this case was in a very difficult position as his colleague was being assaulted’.

An onlooker said: ‘The boy was about 16 or 17 years old and was by himself on the train. I think he might have only got on at the station before Bagshot and was trying to get to get to the next station

‘The ticket inspector was checking tickets and when he got to this boy, there was a conversation between them and the boy turned aggressive. 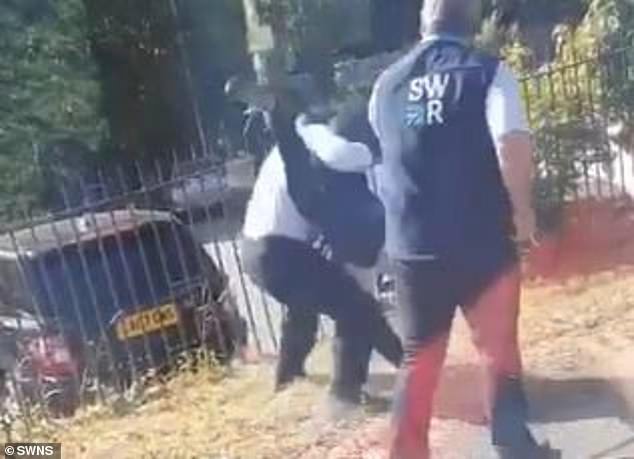 The employee can be seen slamming the teenager into the ground. South Western Railway said the train driver was in a ‘difficult position as his colleague was being assaulted’ 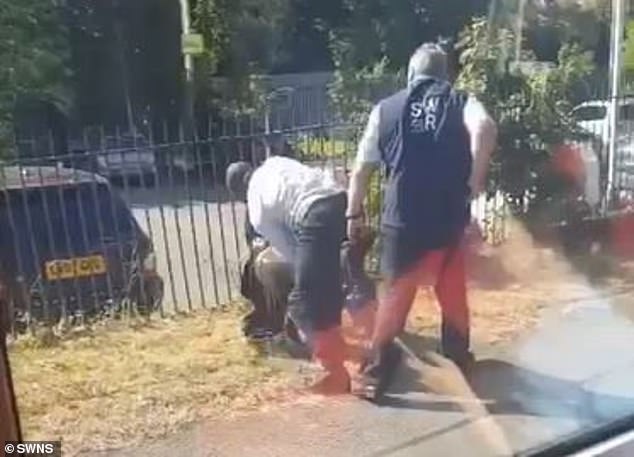 In the clip, the train driver can be heard saying ‘relax yourself’ as the boy gets to his feet and leaves. South Western Railway said a ‘full investigation’ into the incident is underway

‘He started shouting and swearing at the ticket inspector who you could hear telling him he needed to leave because he didn’t have a ticket.

‘The boy started pushing the ticket inspector who pushed him back towards the door of the train, telling him to get off.

‘As this happens, the actual train driver got off the train too and got involved in a punch up whilst trying to calm the boy down.’

The onlooker added: ‘When the boy did not comply, the train driver lifted him up and threw him to the ground, telling him to ‘relax yourself’.

‘The boy got up and walked away, still shouting and laughing as if he was proud of himself. He must be Britain’s hardest train driver.’

A spokesperson for South Western Railway said: ‘We train our colleagues in conflict avoidance, and would always advise against physical contact, but the driver in this case was in a very difficult position as his colleague was being assaulted.

‘A full investigation is underway into this incident which took place several weeks ago.’