Teachers protest reopening of US schools while coronavirus lurks

Chicago: Teachers and support staff at more than 35 school districts across the United States on Monday staged protests over plans to resume in-class instruction while COVID-19 is surging in many parts of the country.

The protesters, who formed car caravans and attached signs and painted messages on their vehicles, demand schools hold off until scientific data supports such a move. 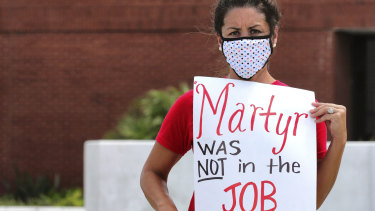 Rachel Bardes holds a sign in front of the Orange County Public Schools headquarters as teachers protest with a car parade around the administration centre in Orlando, Florida.Credit:AP

They want districts to wait until safety protocols such as lower class sizes and virus testing are established, and schools are staffed with an adequate number of counsellors and nurses, according to a website set up for the demonstrations.

Coronavirus deaths are rising in 31 states, up from 27 states a week ago, according to a Reuters analysis of the past two weeks compared with the prior two weeks. More than 155,000 people have died of COVID-19 related illness in the United States, the most in the world.

Teachers also are demanding financial help for parents in need, including rent and mortgage assistance, a moratorium on evictions and foreclosures, and cash assistance. 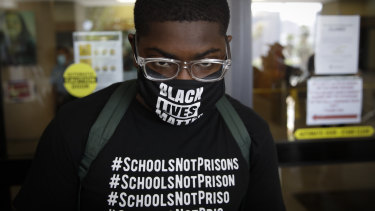 A demonstrator stands outside the school board headquarters during a protest Monday in Los Angeles. Credit:AP

Many of these issues are at the centre of a political tussle in Washington, where Democrats in Congress and Trump administration officials resumed talks on Monday to hammer out a coronavirus economic relief bill after missing a deadline to extend benefits to tens of millions of jobless Americans.

Education employees in Chicago, Milwaukee and Philadelphia honked their horns in socially distanced car protests. Protesters rallied outside the Los Angeles Chamber of Commerce building and in the Hartford, Connecticut, area, about 400 formed a car march that went by Governor Ned Lamont's home.

"I do not want to put my students or myself in harm's way. I do not want to be an experiment," Andrea Parker, an elementary school teacher in Chicago, told reporters before a car protest. 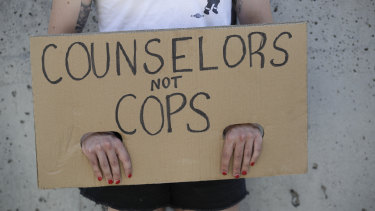 A demonstrator holds a sign during a protest in Los Angeles, where parents, students, and teachers held a press conference and car caravan to call for a safe, fully funded, and racially just approach to reopening schools.Credit:AP

In a Lincoln, Nebraska, protest, a handful of people blocked the SUV of Governor Pete Ricketts as he left a briefing, a video on Twitter showed. "We are asking him to not try to kill children," one of the protesters said to an officer who asked them to clear the way for the governor's vehicle.

"Cases up because of BIG Testing! Much of our Country is doing very well. Open the Schools!" the Republican Trump tweeted on Monday.

While reported case numbers, rising in 28 states according to the Reuters analysis, may be linked to more testing, the rise in hospitalisations and deaths have no connection to an increase in testing.

The United States is in a new phase of the outbreak with infections in rural areas as well as cities, Deborah Birx, the coordinator of Trump's coronavirus task force, said on Sunday.

Previously hard-hit, densely populated parts of New York and New Jersey reduced the spread of the virus with stiff restrictions on movement and gatherings and healthcare measures. On Monday, however, faced with more new cases linked to indoor events, New Jersey Governor Phil Murphy reduced indoor limits to 25 people per room from 100.

New York Governor Andrew Cuomo said he would determine later this week based on the infection rate whether to reopen schools. Cuomo said of states including Florida and Texas now suffering casualties: "It was a mistake to deny the reality that happened in New York."

On Monday, Trump accused Birx of capitulating to criticism from Democrats that his administration's response to the pandemic has been ineffective.

"So Crazy Nancy Pelosi said horrible things about Dr. Deborah Birx, going after her because she was too positive on the very good job we are doing on combating the China Virus, including Vaccines & Therapeutics. In order to counter Nancy, Deborah took the bait & hit us. Pathetic!" Trump tweeted.

House of Representatives Speaker Pelosi said on CNN that Birx "enabled" Trump, who played down the seriousness of the virus in the early stages and pushed for a quick reopening of the economy following weeks of lockdowns.

"I don't have confidence in anyone who stands there while the President says swallow Lysol and it's going to cure your virus," Pelosi said, referring to Trump asking at a briefing in April whether injecting disinfectant into the body could be a treatment, leading manufacturers to warn against doing so.