Elementary school teacher is suspended after taking a photo with her foot on the neck of a black pupil, 10, on the day of Derek Chauvin’s guilty verdict

A Texas school has suspended a teacher after she staged a photo placing her foot on the neck of a black ten-year-old boy in the wake of Derek Chauvin’s guilty verdict.

The unnamed teacher from Lamar Elementary in Greenville is on administrative leave after the photo was taken on Tuesday and posted on Facebook, the same day as the end of the trial into George Floyd’s murder.

The employee, who is friends with the mother of the boy in the photo, texted the image to her, joking she would put her foot on his neck if he did not return an assignment.

The mother saw the funny side but the boy’s father and other family members did not.

The student’s father Shamell told WFAA: ‘I didn’t like it from the moment I saw it.

‘I don’t really understand the whole situation, but all I know is it was never supposed to happen.’

The mother said she had known the teacher for years and they had a close relationship and the boy was not injured at all.

‘The picture then began to bother me a little bit, showed it and my family got really upset about it.’

The mother added that she does not believe the teacher is racist or deserves to lose her job over the ‘joke’. 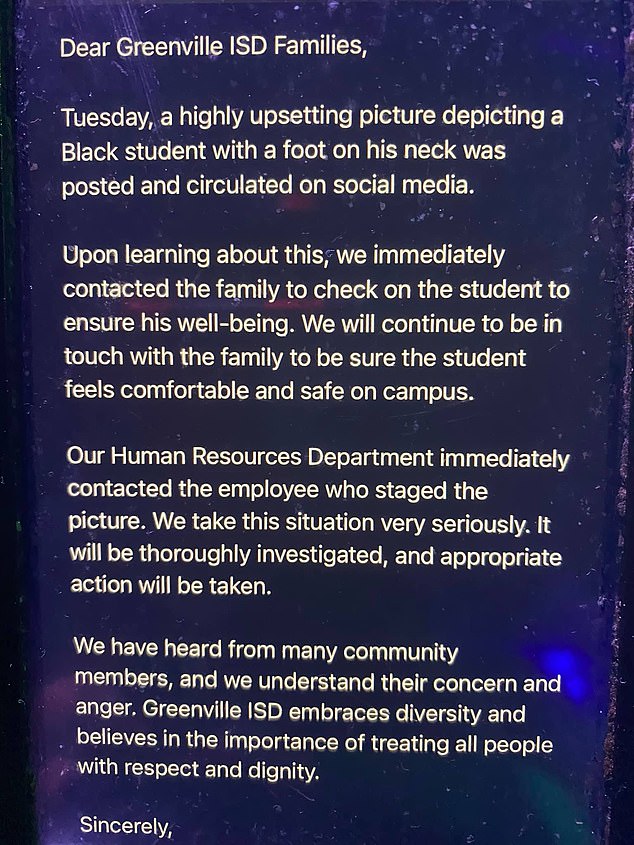 The Greenville Independent School District sent an apology letter to all parents at the school and said they are investigating the incident.

GISD Superintendent Demtrus Liggins said: ‘My initial reaction was disgust. That is not who we are.

The boy was kept at home for his safety and the mother said she was not able to sleep but has since spoken to the teacher on the phone who assured her she would never do anything to hurt her child.

She reached out to the district and asked them not to fire the teacher but they said the decision would ultimately be up to the superintendent.

Liggins had learned about the photo on Tuesday night during a school board meeting and he immediately reached out to the family. 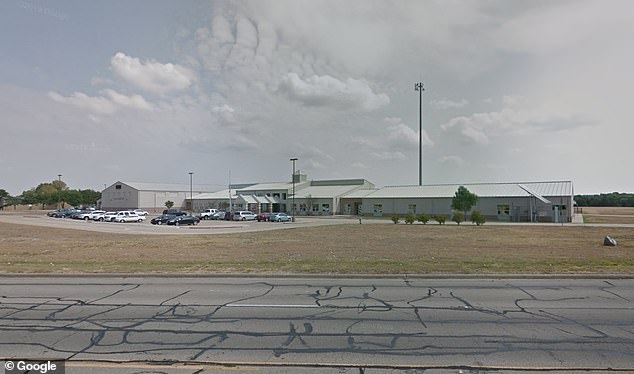 In a letter to parents, the Greenville ISD said: ‘Earlier today, a highly upsetting picture depicting a Black student with a foot on his neck was posted and circulated on social media.

‘Upon learning about this, we immediately contacted the family to check on the student to ensure his well-being. We will continue to be in touch with the family to be sure the student feels comfortable and safe on campus.

‘Our Human Resources Department immediately contacted the employee who staged the picture. We take this situation very seriously. It will be thoroughly investigated, and appropriate action will be taken.

‘We have heard from many community members, and we understand their concern and anger. Greenville ISD embraces diversity and believes in the importance of treating all people with respect and dignity.’