All six English clubs involved in the European Super League have quit the hated competition, after Manchester City became the first club to walk away.

After days of anger from fans and players, the mega-rich Manchester club announced tonight it would pull out of the newly formed tournament.

The statement came after reports suggested Chelsea were set to turn their backs on the £4.6billion plans.

But now the remaining four English teams, Arsenal, Manchester United, Liverpool and Tottenham Hotspur have announced they will follow suit. 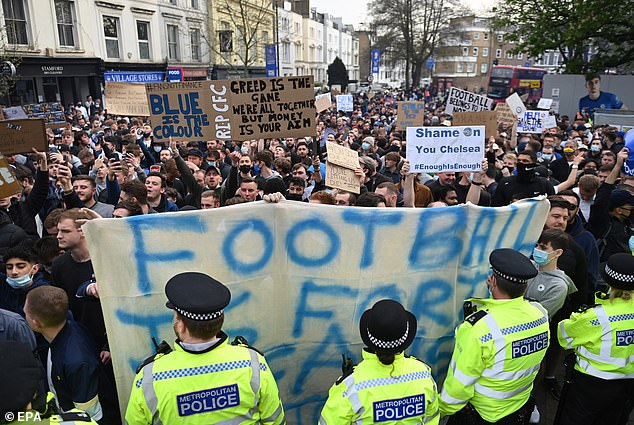 All six English clubs involved in the European Super League have quit the hated competition, after Manchester City became the first club to walk away

Arsenal did so with a grovelling apology to fans, who yesterday protested outside the club’s ground with fans calling for their owner Stan Kroenke to leave.

Tonight, in their statement, the north London club said: ‘As a result of listening to you and the wider football community over recent days we are withdrawing from the proposed Super League.

‘We made a mistake, and we apologise for it.’

Meanwhile Liverpool, who today faced a social media revolt from its players, including captain Jordan Henderson, over the Super League plans said: ‘Liverpool Football Club can confirm that our involvement in proposed plans to form a European Super League has been discontinued.

‘In recent days, the club has received representations from various key stakeholders, both internally and externally, and we would like to thank them for their valuable contributions.’

Liverpool and Manchester United, both owned by American businessman, were said to be driving forces behind the project. 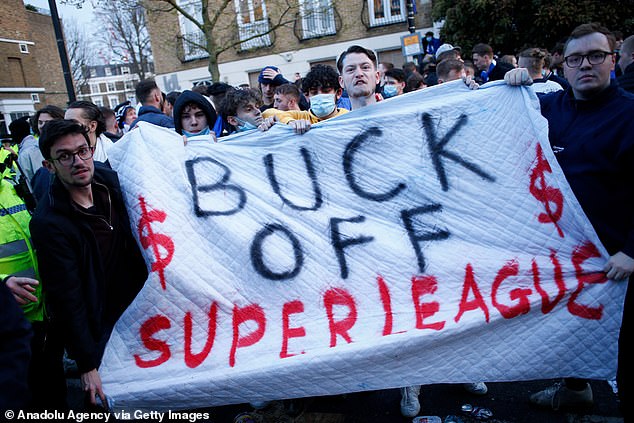 Chelsea, who were playing Brighton tonight in the Premier League, have not yet released a formal statement. Pictured: Fans protested outside Stamford Bridge tonight

Tonight United, whose executive vice chairman Ed Woodward announced he would step down amid the row, said the club would not be participating in the league.

However the club said it remained committed to coming-up with ‘sustainable solutions to the long-term challenges facing the game’.

The statement read: ‘Manchester United will not be participating in the European Super League.

‘We have listened carefully to the reaction from our fans, the UK government and other key stakeholders.

‘We remain committed to working with others across the football community to come up with sustainable solutions to the long-term challenges facing the game.’

Meanwhile, in a statement released on Twitter, Tottenham said: ‘We can confirm that we have formally commenced procedures to withdraw from the group developing proposals for a European Super League (ESL).’

Chelsea, who were playing Brighton tonight in the Premier League, have not yet released a formal statement.

However the club were the first to feature in reports suggesting an English club could quit the competition.