Stray cat dangling from a utility pole is saved by onlookers

A cat stuck on the top of a utility pole in China has been saved by a group of pedestrians with a plastic sheet.

Dramatic footage shows the ginger feline dangling in mid-air and kicking its legs helplessly when a team of Good Samaritans rushed to its rescue and extended a plastic sheet on the ground.

A few seconds later, the animal lost its grip of the telephone wire and plunged towards the ground before it was caught by the large cover and landed safely. 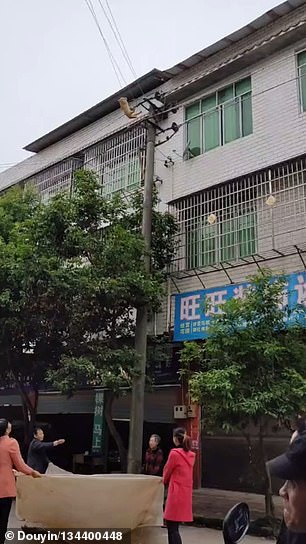 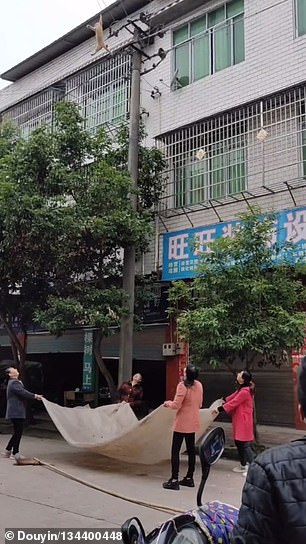 The incident captured on camera by an onlooker occurred on Saturday in Guang’an of south-western Chinese province Sichuan, reported local media.

The cat, appeared to be a stray, is seen in the video clinging to the telephone wire after it climbed onto the top of a utility pole and became stuck.

After spotting the animal, local residents quickly gathered to save the feline.

Footage shows four women holding a large plastic sheet on the ground, preparing to catch the stray cat when it falls.

Other passersby can be heard trying to encourage the animal to jump into the cover.

Media reports did not specify the height of the structure, but an average utility pole in China measures 12 metres (39 feet). 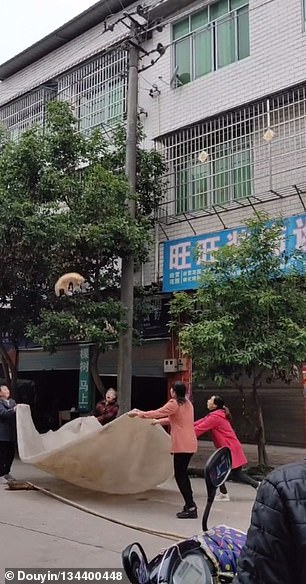 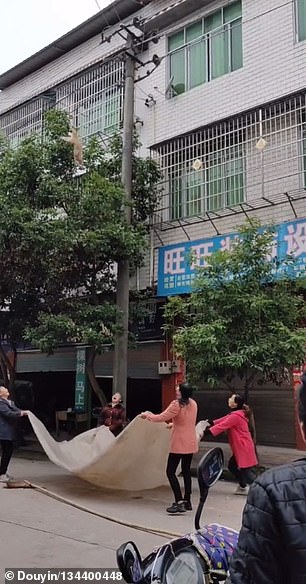 A few seconds later, the animal is seen losing its grip of the telephone wire and plunging towards the ground before it was caught by the large cover and survived the incident 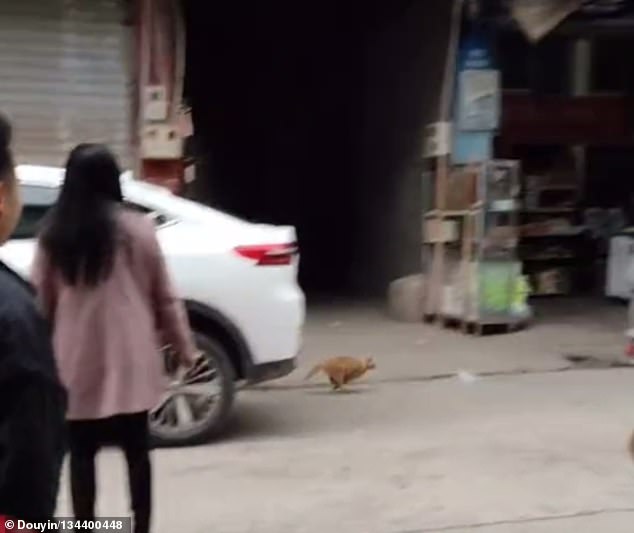 This is the heart-warming moment a cat stuck on the top of a utility pole was saved by a group of pedestrians in China. The animal appeared to be unscathed as it scurried away

After a few seconds, the cat seemed to have lost its grip of the wire and suddenly fell towards the ground as onlookers gasped in horror.

The animal appeared to be unscathed after it landed on the sheet and scurried away.

Social media users praised the kind-hearted residents after the footage was shared on the Chinese TikTok-like Douyin.

One commenter wrote: ‘What a heart-warming move! ­Much respect to the saviours.’

Another one said: ‘This is wonderful. Our world needs more Good Samaritans like them.’

The stray’s lucky escape comes as another video of a cat being escorted off a train after the furry passenger was spotted ‘travelling without a ticket’ has amused millions in China.

The feline, believed to be a stray, sneaked onto a high-speed train in China on Sunday, seemingly trying to hitch a free ride.

After being caught red-handed, the animal is seen trotting on its hind legs with tiny steps as it was carried out of the carriage by a railway officer.

Related posts:
Britain records 100 Covid-19 deaths for the first time since June
Border agents seize 3,100 pounds of meth — the second-largest bust ever
Popular News
EastEnders' Danny Dyer and Kellie Bright arrive on set after show's coronavirus outbreak
27/10/2020
Man Utd wonderkid Ramon Calliste, called ‘the next Giggs’, now owns luxury watch business and makes £5m a year – The Sun
26/03/2020
Megan Thee Stallion Addresses Criticism Over Twerking: ‘I Love to Shake My A**’
26/03/2020
Police guard shops to stop coronavirus panic-buyers and enforce social distancing – The Sun
26/03/2020
Coronavirus: Good Morning Britain’s Dr Hilary reveals ‘game-changing’ self-testing kit
26/03/2020
Recent Posts
This website uses cookies to improve your user experience and to provide you with advertisements that are relevant to your interests. By continuing to browse the site you are agreeing to our use of cookies.Ok