Home » World News » Stop the squabbling over the vaccine rollout

Stop the squabbling over the vaccine rollout

The race is on. It’s a marathon, not a sprint, but some nations have streaked ahead. Israel’s vaccination rollout is leading the way, with just over half the population already having been given their two doses. The United States, Chile, Britain and Bahrain have also got off to a quick start. Australia is well back in the field. Prime Minister Scott Morrison had set the bar high, promising 4 million COVID-19 vaccine doses would be administered by the end of March, although that target was quickly changed to early April and later dropped. When the initial March deadline came around this week, only about 600,000 doses had been given. 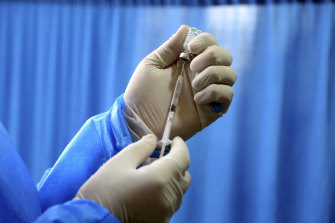 While there are various reasons for the slow start, the most obvious has been the European Union blockade of shipments to Australia of the AstraZeneca vaccine. The federal government was expecting to import 3.8 million doses but could get its hands on only about 730,000 before the blockade was applied. That is a huge shortfall.

The knock-on effect has significantly slowed vaccination in Australia. Only half of the nation’s aged care residents have been inoculated in the past six weeks, falling well short of the government’s original plan to have all residents and workers vaccinated within that time.

Much of the heavy lifting in containing COVID-19 infections up to this point – including hotel quarantine, social distancing restrictions, testing and contact tracing – has been largely managed by the states. But acquiring enough vaccine doses was left to the federal government. On paper, Australia is in good shape, having bought almost 140 million doses. But, as it has found, getting agreement to supply and actually having vaccine to put in arms are two different things.

Federal Health Minister Greg Hunt insists that the government’s target of ensuring everyone who wants to be vaccinated will have access to at least one dose by the end of October is on track, but he appears unwilling to offer much more detail than that.

Triggered by the recent COVID-19 outbreak in Queensland, where some frontline workers were unvaccinated, and inflamed by federal Agriculture Minister David Littleproud, who slammed the states for doing “bugger all” in helping with the vaccine rollout, some serious squabbling ensued between the state and federal governments. It’s all very tit-for-tat.

For a nation that should stand proud of its efforts in containing the virus, much of which can be put down to co-operative state and federal relations harnessed by the national cabinet, it’s disheartening to witness the vaccination rollout so quickly descend into politics as usual.

There is a fix, and it’s not so difficult. It would start with far greater transparency about the number of vaccines that are available. This would give the states, GPs who are heavily involved in the rollout, and the general population a much more realistic understanding of the state of play.

There is good reason to be optimistic. The Pfizer vaccine is still being delivered from overseas, and biotech company CSL, which is contracted to locally produce 50 million doses of the AstraZeneca vaccine, is starting to ramp up production.

Mr Hunt also needs to be far more upfront about the logistical problems along the way. Most Australians would accept that a program of this scale and duration is never going to happen without teething issues. Admit to them, commit to fixing them, and move on.

And surely it’s time to stop the squabbling. The national cabinet is there for a reason. State and federal leaders need to put their heads together to ensure that a slow start does not morph into a botched vaccination rollout. There is too much at stake not to get this right.