Madrid: Spanish Prime Minister Pedro Sanchez has announced stricter lockdown measures that will force all non-essential workers to stay at home for the next two weeks, as the government reported 832 new coronavirus deaths overnight.

Meanwhile, France has ordered more than one billion face masks, the vast majority from China, the country's health minister says. 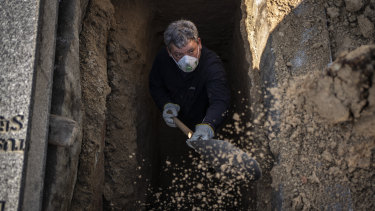 An undertaker prepares a grave for the burial of a victim of the COVID-19 at the Almudena cemetery in Madrid on Saturday. Credit:AP

The latest moves to combat the virus in Spain, the second-worst affected country in Europe after Italy, will be approved at a cabinet meeting on Sunday and will last from March 30 until April 9.

It comes as the government scrambles to build up its supplies, with the coronavirus outbreak showing no sign of easing.

"This decision allows us to reduce the number of infected people to a much greater extent," Sanchez said in a televised address. 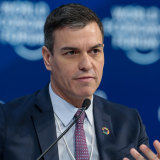 He urged the EU to issue bonds, saying "we have to mutualise the debt, issue reconstruction bonds to deal with coronavirus".

"We do not understand why the eurozone, which shares a currency, does not share fiscal policy," he said.

As Spain prepared to enter its third week of lockdown, hospitals and morgues struggled under the pressure and infections rose to 72,248 from 64,059 the day before.

An unused public building known as "the doughnut" was the latest to be turned into a makeshift morgue after a city ice rink last week, Spanish media reported.

Health emergency chief Fernando Simon said the epidemic appeared to be reaching its peak in some areas, but the country was short of intensive care unit beds.

"We continue to have a major problem with ICU saturation," said Simon.

A delivery of 1.2 million masks bought by the Ministry of Transport from China for health, transport and postal workers arrived at Madrid airport, the government said.

French Health Minister Olivier Veran said France was using 40 million face masks weekly as it battles the pandemic and currently has three weeks worth of supplies.

Doctors, nursing home carers, the police and other frontline staff have decried a shortage of masks.

In Barcelona, delivery workers with masks took free meals to health workers on Friday evening as part of the Delivery 4 Heroes initiative, in which six companies have joined forces to send free meals daily to up to 200 people.

"It is not only food, but a gift of emotion and encouragement to continue and to think that everything that is being done is really worth it," Dr Luis Miguel Martin, who was given dinner at Barcelona's Hospital del Mar, told Reuters.

Schools, bars, restaurants and shops selling non-essential items have been shut since March 14 and most of the population is housebound as Spain tries to curb the virus.