South West region is emerging from lockdown more quickly than rest of UK while Londoners are most likely to still be staying home, traffic data reveals

The south west region is emerging from lockdown more quickly than the rest of the UK while Londoners are most likely to stay home, new figures have revealed.

Anonymised mobile phone data gathered by Oxford University shows population movements were on average 37 per cent of normal levels in the south west in the week to June 6.

This compares to 23 per cent in London and 27.6 per cent in Scotland, where Britons were least likely to leave their homes despite Boris Johnson easing coronavirus restrictions again on June 1.

The Prime Minister, who initially imposed draconian rules on March 23 in an effort to slow the spread of the virus, announced on May 30 that groups of six people from different households could exercise together outdoors from June 1.

The changes came into force on the same day that people in England were allowed to meet up with five others from different households outside, either in private gardens or public spaces. 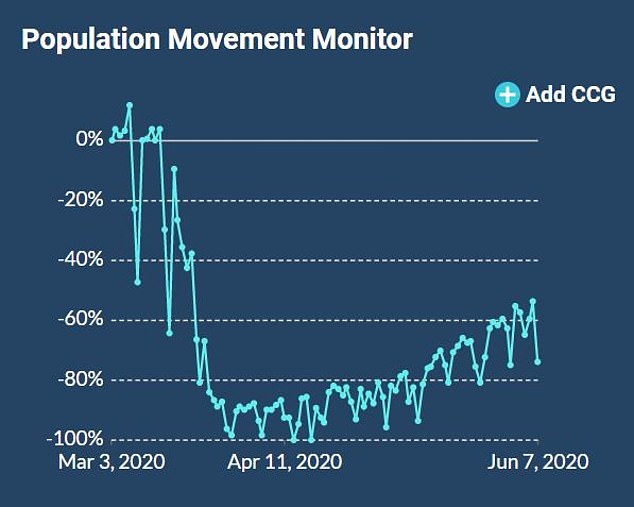 Pictured: Population movement across the south west recorded from March 3 to today, compared to a pre-coronavirus baseline

According to Oxford University’s Covid-19 Impact Monitor, those in the south west took most advantage of the eased rules between May 31 and June 6.

Population movement was at 45 per cent of normal levels in Devon, 48 per cent in Swindon, Wiltshire and 41 per cent in Dorset.

Some areas in the north west have also eased out of draconian measures quickly, with population movements at 66 per cent of normal levels in Blackpool and 64 per cent in Morecambe Bay.

This compares to 33 per cent in the region as a whole, and 34 per cent in both the north east and the south east.

Those in the West Midlands were also quick to leave lockdown behind, with mobility at 34 per cent of pre-lockdown figures.

North East Lincolnshire, recorded within the figures for Yorkshire, noted unusually high movement, with mobility at 61 per cent of normal levels. 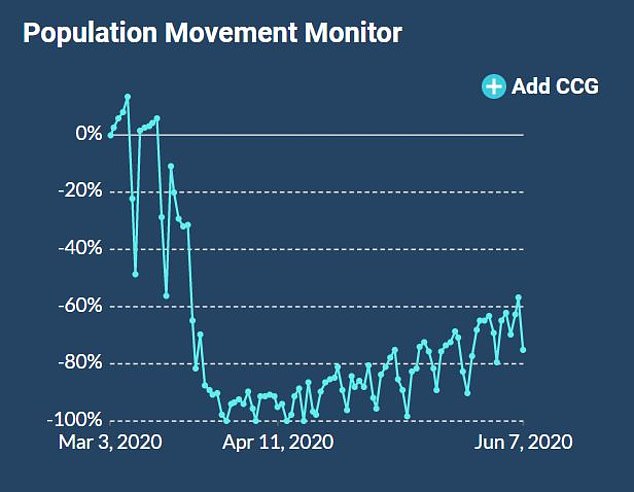 Movement was also up in the north west (pictured), with Blackpool recording 66 per cent of normal levels between May 31 and yesterday 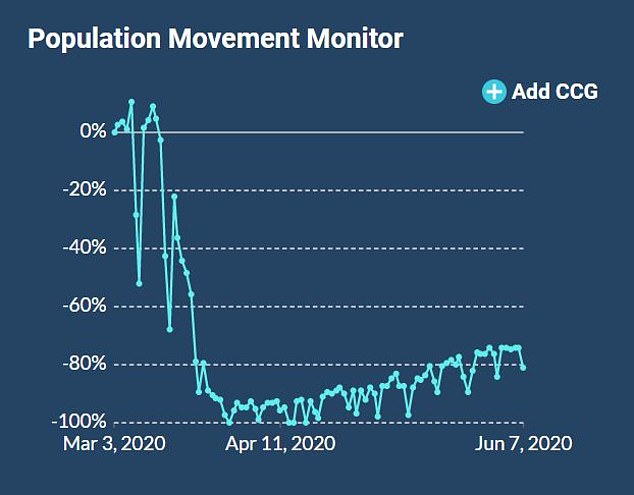 This compares to an average of 23 per cent in London (pictured), where Britons were least likely to leave their homes despite Boris Johnson easing coronavirus restrictions again 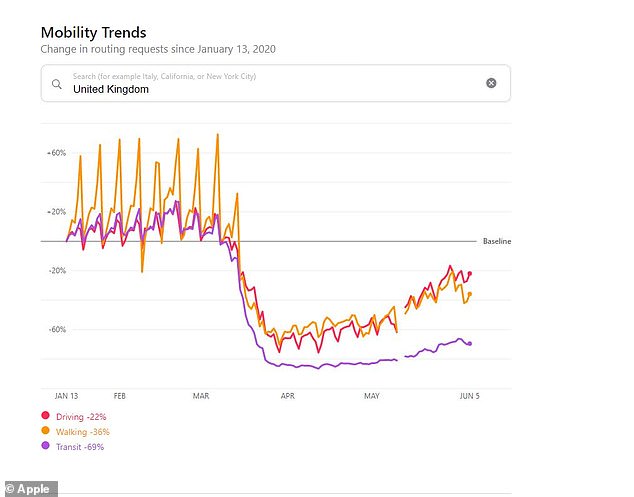 Mobility data provided by Apple also shows an increase in those leaving their homes by car and foot in recent days, despite a continuing dip in public transport usage

The population movement data, provided to Oxford University by Cuebiq, is collected through smartphone applications from users who have opted-in with anonymity regarding their personal identity and personal details.

Mobility data provided by Apple also shows an increase in those leaving their homes by car and foot in recent days, despite a continuing dip in public transport usage.

Across the UK, there are 22 per cent less cars on the road compared with a baseline level, with Britons going on walks 36 per cent less than before lockdown.

This increase in movement comes as the Prime Minister is expected to reveal plans to ‘rebuild Britain’ in the wake of the coronavirus pandemic. 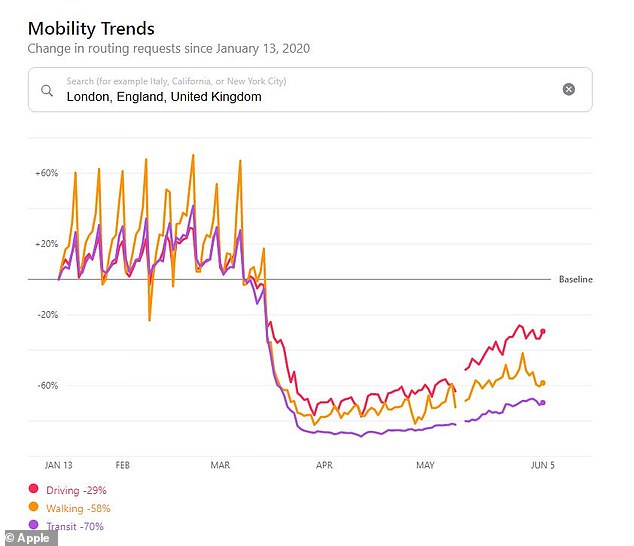 The Prime Minister is expected to use a major speech to effectively relaunch the Conservatives’ domestic agenda after the Government’s attention turned to the Covid-19 crisis, during which the Tories’ poll rating has plummeted.

Mr Johnson will this week chair a meeting of his Cabinet to update them on the next lockdown-easing steps for a number of sectors, which are expected to take effect from June 15.

The Sunday Times reported that the PM will unveil plans to ease restrictions on weddings and funerals from next month, as well as possible measures to reopen hairdressers before July 4.

Planning controls will also be relaxed to enable pubs, cafés and restaurants to use outside areas.

Downing Street announced on Saturday night that churches and other places of worship are set to open for private prayer from June 15, but worship groups, weddings and other services will still not be permitted.

Related posts:
Kane Brown Performs Soulful Cover Of ‘Stand By Me’
Gun of same type used to kill Lyra McKee seized in Londonderry
Popular News
Joaquin Phoenix, Rooney Mara welcome first child: a son named River
28/09/2020
Man Utd wonderkid Ramon Calliste, called ‘the next Giggs’, now owns luxury watch business and makes £5m a year – The Sun
26/03/2020
Megan Thee Stallion Addresses Criticism Over Twerking: ‘I Love to Shake My A**’
26/03/2020
Police guard shops to stop coronavirus panic-buyers and enforce social distancing – The Sun
26/03/2020
Coronavirus: Good Morning Britain’s Dr Hilary reveals ‘game-changing’ self-testing kit
26/03/2020
Recent Posts
This website uses cookies to improve your user experience and to provide you with advertisements that are relevant to your interests. By continuing to browse the site you are agreeing to our use of cookies.Ok