Slow-starting Europe vaccination drive could catch up with Britain

The European coronavirus vaccination drive could catch up with Britain ‘in the coming weeks’ despite a slow start plagued by delays.

Europe’s vaccine roll-out was condemned as ‘unacceptably slow’ by the World Health Organisation earlier this month, with leaders blaming delays for ‘prolonging the pandemic’.

The roll-out is now finally taking off as the EU faces soaring infection rates – with some even suggesting the mass vaccination drive could soon rival the UK.

European Commission President Ursula von der Leyen confirmed this week that the EU has administered 100 million doses, adding this is a ‘milestone we can be proud of.’

Some 27 million Europeans are fully vaccinated, meaning the bloc has edged closer to its goal of having vaccinated 70 per cent of the adult population by the end of the summer.

More than 32 million Britons have received the first dose of a vaccine, and nine million have been administered both jabs. 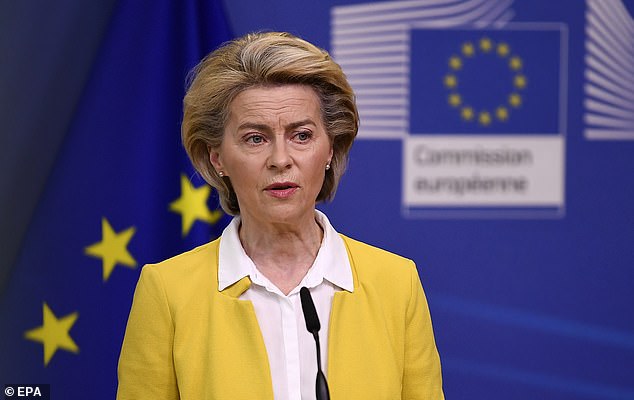 European Commission President Ursula von der Leyen confirmed this week that the EU has administered 100 million vaccine doses, adding this is a ‘milestone we can be proud of’ 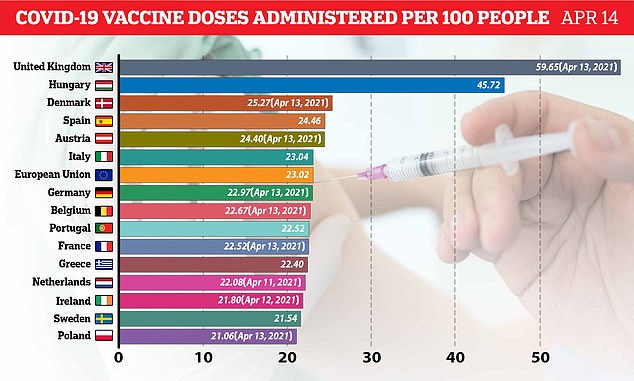 Some 27 million Europeans are fully vaccinated, meaning the bloc has edged closer to its goal of having vaccinated 70 per cent of the adult population by the end of the summer

But medics in Germany are currently administering around 200,000 more daily vaccines than the British, the Telegraph reported.

The country set a new national record on Wednesday with 738,501 jabs given in a day. This compared to 547,465 jabs administered in the UK.

Around 18.5 per cent of Germans have now received the first dose of a vaccine – an increase of 12 per cent from April 1. Some 6.4 per cent are fully vaccinated.

In France, more than 450,000 jabs are now regularly given out per day following the launch of 40 mass vaccination sites.

However, the nation became the eighth to pass 100,000 Covid deaths this week, with an average of 300 people succumbing to the virus per day.

Elsewhere, in Italy, medics have continued to consistently give around 200,000 jabs per day since the end of March.

The vaccination drive got off to a slow start in Europe after the bloc failed to order enough doses and grant vaccinations swift approval. 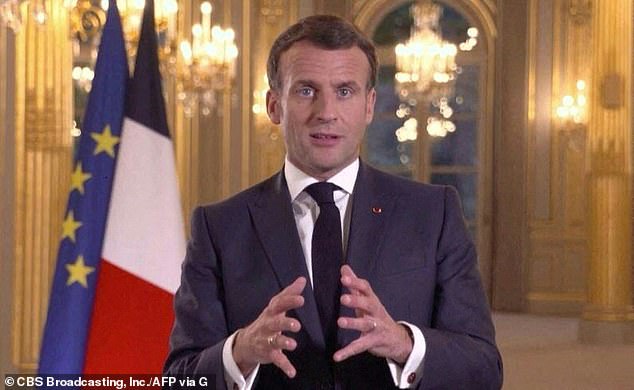 In France, more than 450,000 jabs are now regularly given out per day following the launch of 40 mass vaccination sites. Pictured: President Emmanuel Macron 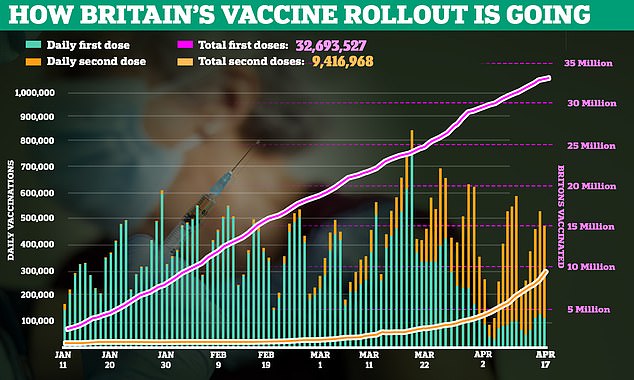 More than 32 million Britons have received the first dose of a vaccine, and nine million have been administered both jabs

At the start of April, only 10 per cent of Europe’s population had received a first dose, compared to nearly 60 per cent of Britons.

However, despite a swift start, the roll-out of Covid vaccines to new patients in the UK has slowed to a crawl in comparison to how it performed in March.

An average of 91,000 people are getting their first dose each day now after the roll-out peaked at just over 500,000 per day in the middle of last month.

The roll-out itself has managed to keep moving quickly, reaching an average 462,000 people per day over the last week, but most doses now are boosters.

A bottleneck in supplies and a need to give second jabs to millions of people who got their first in January have meant the roll-out has lost momentum.

Figures from the NHS show that 117,835 people got their first vaccine dose on Wednesday, which was up from just 59,905 on Monday but significantly lower than the one-day record of 614,930 on March 19.

The focus has switched now to second doses, with four times as many of those being administered each day – an average of 346,000.

Health Secretary Matt Hancock and NHS bosses warned at the end of March that April would be a month dedicated to second doses and preserving supplies.

Although the introduction of a third vaccine, made by Moderna, has allowed some newcomers to get their first jab – the programme opened up to 45 to 49-year-olds this week – Pfizer and AstraZeneca supplies for newcomers are running low.

Medical chiefs said in a warning on March 17 that, for four weeks or more, ‘volumes for first doses will be significantly constrained’.

Health chiefs have known for months that April would be the month second jab demand started to kick in. 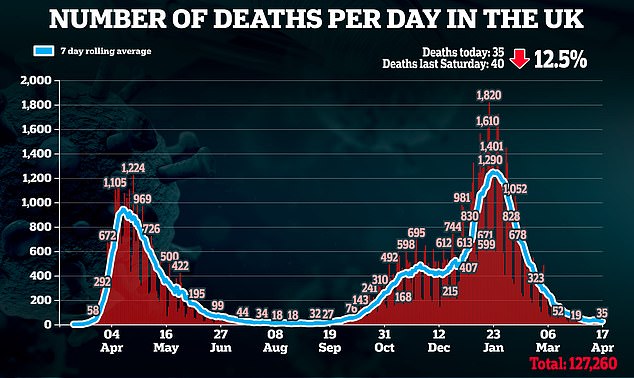 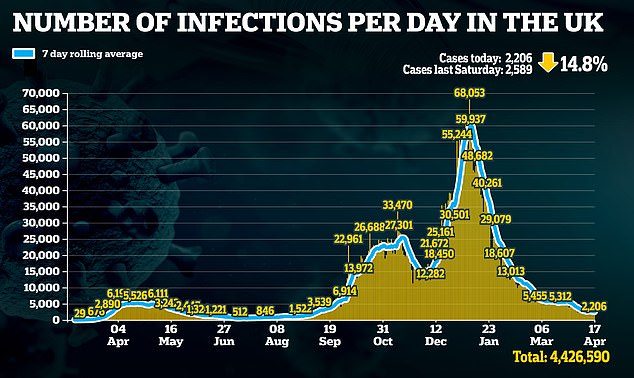 Everyone must get the second dose of their Covid vaccine about 12 weeks after the first, according to UK Government policy.

A total of 9.2million people were vaccinated with at least one dose by the end of January, meaning that the same amount must have had both jabs by the end of April.

So far, 8.5million people have had both doses.

Because of the need to get through these people, all supplies of Pfizer’s vaccine and most of those from AstraZeneca have been preserved for follow-up jabs for these people.

This was planned for, as was a dip in supply after the initial massive deliveries from manufacturers that also have commitments to other countries.

But the UK had hoped it would be able to steam ahead with its plans to vaccine younger people using a batch of five million extra doses of the Oxford jab due to arrive from India, as well as the first lots of Moderna jabs.

That India delivery was held up, however, putting the roll-out on the back foot.

When that was announced last month NHS clinics were sent a letter that said the number of people getting first vaccine doses would be much lower in April.

Matt Hancock said at the time that the roll-out to under-50s might have to be paused to make sure there were enough supplies to get through all the second doses that needed doing.

He said in a Downing Street press conference: ‘We’re on track to offer a first dose to everyone in priority groups one to nine by April 15.

‘While we deliver on that commitment, we also want to ensure that this offer reaches everyone in groups one to nine.

‘At the same time as opening up offers of vaccinations to all those who are 50 or above, we are going to do whatever it takes to reach all those in the most vulnerable groups who haven’t come forward yet before we move onto the next cohort, which is people in their 40s.

‘Before we forge ahead I want us to be confident that we’ve done everything we can to protect those most in need of protection and we will do all we can and do everything necessary to deliver the supplies that are contractually committed to protecting people in this country.’

The Government said it successfully hit the target of offering vaccines to everyone over the age of 50, with a long-term health condition, or who was a health or social care worker, by April 15.

This week it expanded the offer of first vaccine doses to people aged between 45 and 49.

Mr Hancock said the roll-out would expand to everyone in their forties ‘in line with supplies’.