The Connecticut National Guard on Tuesday laid to rest one of its own, Kevin Jiang — the U.S. Army veteran and Yale University graduate student gunned down outside his vehicle in New Haven two weeks ago.

Jiang, who would have turned 27 on Valentine’s Day, was laid to rest at State Veterans Cemetery in Middletown, Conn.

Photos shared with Fox News by the Connecticut National Guard showed Guardsmen salute Jiang’s casket, draped in a United States burial flag, before it was slowly lowered beneath the snow-covered ground. Three flags, folded into the symbolic tri-cornered shape, were presented: one to Jiang’s mother, one to his father and one to his fiancée, Zion Perry.

“Our hearts are heavy having lost a brother and bright young member of our team with nothing but potential ahead of him. 2nd Lt. Jiang believed in service to his community and recently volunteered to support COVID-19 relief efforts,” Maj. Gen. Francis Evon said in a statement provided to Fox News Wednesday. “There’s nothing to call this other than a tragedy and we give our deepest condolences to his family, fiancée and loved ones and thank you for the precious time you’ve shared him with us.” 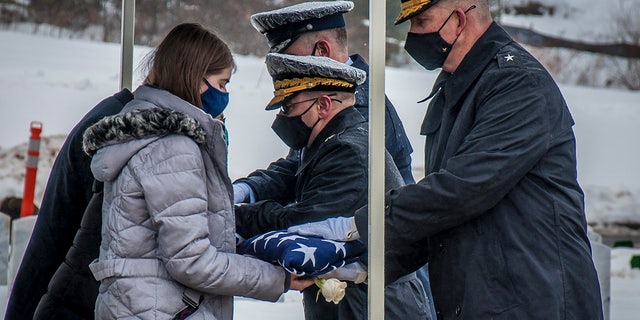 Three flags were presented: one to the mother, one to the father and one to the fiancée, Zion Perry.
(Connecticut National Guard)

Connecticut State Police provided an escort to the cemetery.

“Today, we laid to rest and mourn for 2nd Lt. Kevin Jiang at the State Veterans Cemetery in Middletown. Jiang was a member of the 118th MFMB,” CT National Guard previously tweeted Tuesday, sharing some photos from the veterans cemetery. “Please take a moment to remember 2nd Lt. Jiang and keep his family, friends, and those affected by his death in your thoughts.”

His burial ceremony was carried out the same day the U.S. Marshals Service announced it was doubling its reward to $10,000 for information that leads to the arrest of Qinxuan Pan, the person of interest wanted for questioning in connection to Jiang’s homicide. 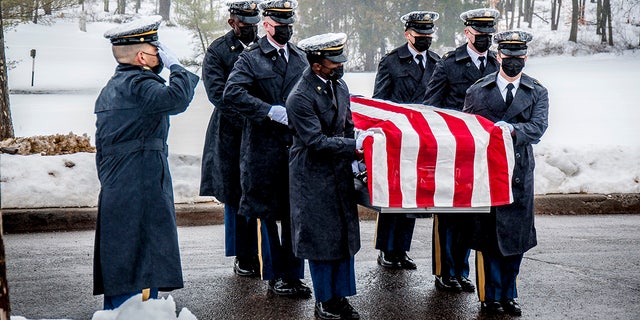 Pan, a 29-year-old Massachusetts resident and MIT graduate student originally from Shanghai, is believed to have been in the area when Jiang was fatally shot at the corner of Lawrence and Nicholl streets in New Haven on Feb. 6. Pan should be considered armed and dangerous. He is charged with one count of unlawful flight to avoid prosecution and interstate theft of a vehicle.

Matthew Duffy, a U.S. Marshals Service spokesman with the District of Connecticut Violent Fugitive Task Force, confirmed to Fox News on Tuesday that its search remains focused in the Brookhaven and Duluth areas in Georgia, where Pan was last spotted on Feb. 11 driving with family members. Family members told investigators that Pan was carrying a black backpack and acting strangely when they last came into contact with him, according to the U.S. Marshals Service.

Jiang was born on Feb. 14, 1994, in Iowa City, Iowa, to his parents Zhen (Linda) Liu and Mingchen Jiang, according to his obituary published online by the Hamden Memorial Funeral Home.

MANHUNT FOR PERSON OF INTEREST IN YALE STUDENT’S MURDER FOCUSED ON GEORIGA: US MARSHALS

He spent most of his childhood in Chicago, and as a high school student joined the youth group at the Chinese Bible Church of Oak Park, which is now called Cornerstone Chinese Church, where “he came to understand the Bible and grew as a follower of Jesus,” according to the obituary. Jiang then went to college and joined the military in Seattle.

According to his LinkedIn profile, Jiang was a former tank operator for the U.S. Army.

He graduated from the University of Washington in 2016 with a bachelor’s degree in environmental studies before moving to New Haven in 2019 to pursue a master’s degree at the Yale School of the Environment. 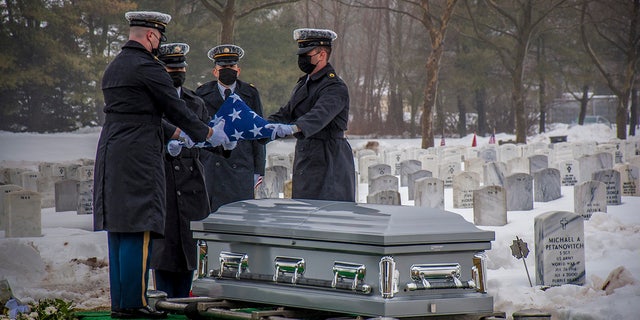 During his time in New Haven, Jiang, “eagerly volunteered and invited others to join him at Trinity Baptist Church,” his online obituary said. He also participated in numerous extracurricular activities, including the Rivendell Institute and the New Haven Salsa Group.

“As a veteran of the U.S. Army and a National Guard Reservist, he served his country with excellence. He was engaged to his beloved fiancée Zion, and had much to look forward to,” the obituary said. “But above all, Kevin lived by faith in the Lord Jesus Christ and looked forward to Jesus’ promise of the resurrection from the dead. Though his earthly life was cut short, he used the time that he had on earth to the fullest.

His funeral service was held Saturday at Trinity Baptist Church in New Haven, where he and his mother were regular volunteers. Jiang proposed to his fiancée, Zion Perry, on Jan. 30 – one year after the pair first met at a church retreat in Connecticut.

Perry, whose parents live in Pennsylvania, previously told Fox News she met Jiang while she was still completing her undergraduate degree in biological engineering at the Massachusetts Institute of Technology (MIT). She later enrolled in graduate school at Yale University and moved to New Haven.

Authorities have declined to comment on whether any possible connection between Perry and Pan resulted in Jiang’s death. Photos obtained by Fox 61 show Perry and Pan talking at an MIT swing dance in March 2020, but details about any relationship are unknown.

On Friday, the New Haven Police Department said Pan visited car dealerships in both Connecticut and Massachusetts prior to Jiang’s homicide and was looking to purchase a small-model SUV. While at the dealerships, he asked to test drive vehicles and asked to bring them to his mechanic for inspection, according to investigators.