Sky News viewers slam ‘posh, privileged white’ reporter from an aristocratic family for tailing migrants across the Channel while waving a microphone and asking ‘are you ok?’

Sky News viewers have slammed a ‘posh, privileged and white’ reporter for tailing migrants across the Channel while waving a microphone while asking ‘are you ok?’

Footage shows correspondent Ali Fortescue, the granddaughter of the 6th Earl Fortescue, approaching the small dinghy of ten people that can be seen heading towards Dover.

She begins: ‘You might be able to see in the distance the fourth boat of migrants that we have seen today and I have to say it is an unsettling image coming this close.’

Ms Fortescue then waves and holds out her microphone, shouting: ‘Hello, are you okay?’, before giving a thumbs-up while asking: ‘Where are you from?’

But Twitter users criticised the broadcast, with one posting: ‘Posh privileged white woman interviews desperate migrants fleeing terror… lmao what is this’. 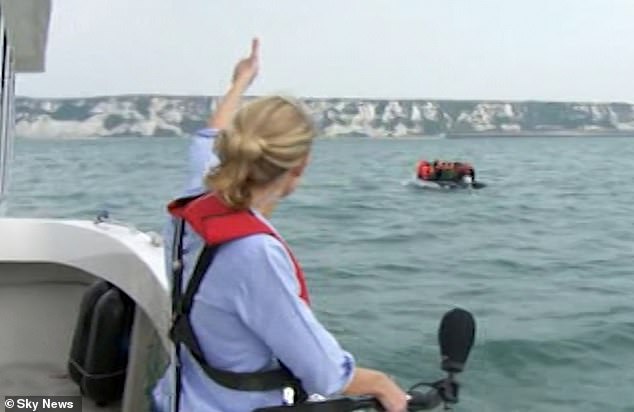 Sky News correspondent Ali Fortescue can be seen giving a thumbs-up towards the dinghy approaching Dover, while asking during a broadcast: ‘Are you okay?’

Meanwhile, another wrote: ‘Jesus Christ, this isn’t journalism this is a Victorian side show for ratings. Low even for Sky.

‘Some white, privileged presenter shouting “are you ok?” at people fleeing war torn countries in a f***ing dinghy. I’m no journalist but I’d hazard a guess that they’re not “ok”.’

Some of the people in the small boat respond to the correspondent’s questions, saying they are from Iran, before she continues: ‘We’re very close as you can see to the white cliffs of Dover now.

‘Our boat driver is just calling the coastguard now so obviously we will stay with this boat and make sure it’s safe as it comes into shore.

‘But it really has been quite an extraordinary morning out on the English Channel, of course we know this is now a very familiar scene – that doesn’t make it any less unsettling to see.’ 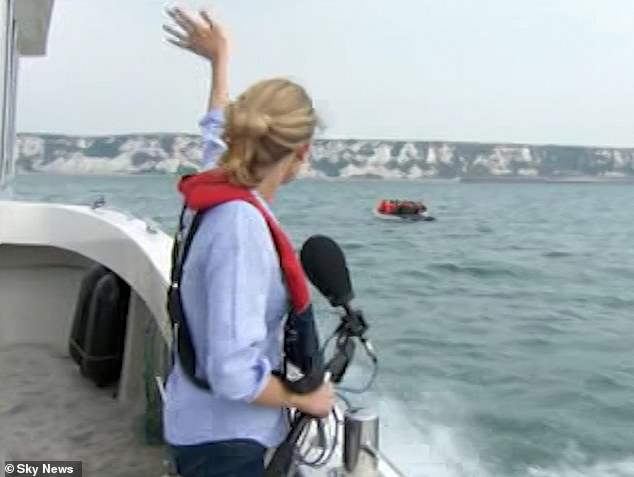 Ms Fortescue was seen waving at the boat. She said the driver had called the coastguard and the team would remain with the boat until it safely came to shore 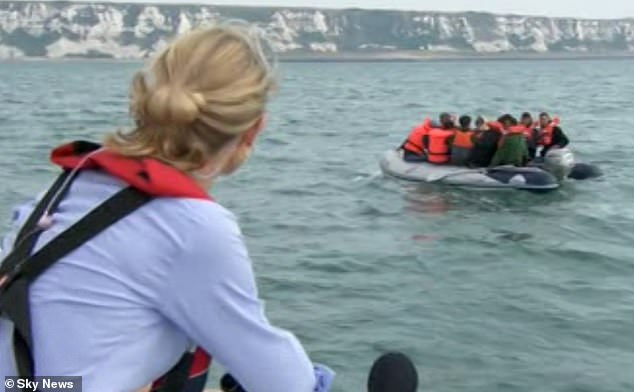 The reporter held out a microphone towards the small boat, asking: ‘Where are you from? You okay?’, with some of the people in the dinghy responding, saying they are from Iran 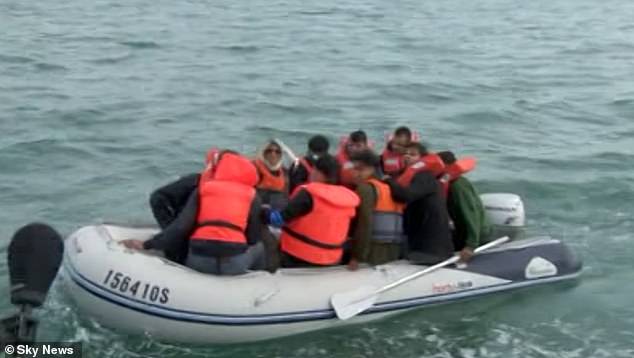 Twitter users reacted to the video, shown above, with one posting: ‘Sky News reporter to migrants crossing the Channel in a dinghy: “Are you ok?”

Ms Fortescue goes on to say her reporting team has seen three boats today with the first ‘quite a way off’ and the second ‘cheering UK’ while they drove past.

She added: ‘Clearly very excited about the prospect of building a life here in the UK. Obviously these are migrants that are absolutely determined to take what is a very dangerous journey across the English Channel.

‘We know that even on a calm day like today this is the busiest shipping lane in the world. It is a dangerous journey, charities really are urging the UK to make it easier for migrants so that they don’t have to take this really dangerous route.

‘Whatever side of the argument you are on there is a clear desire to not see these sorts of very, very dangerous crossings. But as I say we will stay with this boat and make sure it gets to shore safely.’

According to Sky News’ website, Ms Fortescue, who previously worked at the BBC, covers a ‘range of national and international news stories’ and was the first correspondent to witness a migrant boat crossing the Channel.

Twitter users, above, criticised the broadcast, with one posting: ‘Posh privileged white woman interviews desperate migrants fleeing terror… lmao what is this’

It adds: ‘She has won multiple awards, including an O2 award, and was commended at the Royal Television Society for her “astonishing journalism” uncovering abuse at a care home in Margate.’

Other Twitter users reacted to the video, with one posting: ‘Sky News reporter to migrants crossing the Channel in a dinghy: “Are you ok?”

‘Migrants: “Yes all good here thanks. Took a wrong turn at Magaluf and just shooting the breeze with a few pina coladas.”

Another wrote: ‘Sky News reporter looking at a small boat of migrants and asking “how many are you?”