A SHOPPER was seen flashing a "religious exemption" card as a grocery store, claiming that federal law allowed him to not wear a mask.

In a video that went viral on social media this week, a man was seen being approached by store employees who appear to be asking him to put on a mask. 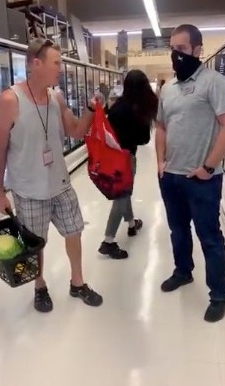 As the man walks down the store aisle, he shows a card he's wearing on a lanyard around his neck to the person filming him.

"The bearer of this card is LEGALLY EXEMPT from wearing any face covering or being subject to temperature taking, viral testing or vaccinations, as protected by US Federal Law, Title II of the Civil Rights Act, U.S. Code 42 ss 2000 (a)," the card read.

The man said in the video, that has been viewed over 343,000 times: "It's illegal to discriminate." 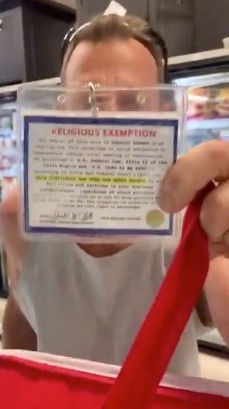 One Twitter user said the incident happened in California, but it is unclear what store the man was shopping in.

The "exemption" card is sold for $12 by The Healthy American.

"The intention of this card is to bless those who use it and read it," the website reads.

The website also states it does not guarantee entry into any business establishment.

According to research conducted by USA Today, there are no religious-based exemptions for wearing masks while in public places of business. 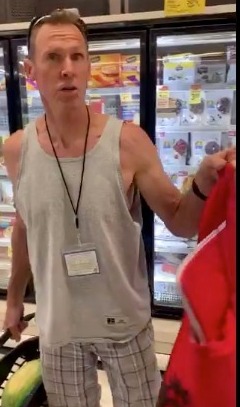 USA Today did find that some states allow exemptions in places of worship.

While the exemption card states the bearer of the card is protected by the Civil Rights Act, Harvard Law School professor Noah Feldman told USA Today that is does not provide that exemption.

“The government can’t discriminate against you on the basis of your religion, but it doesn’t appear to be discriminating against you here by telling you to wear a mask,” Feldman said.

“Contrary to what this card is saying, federal law cannot get you an exemption from a neutral, generally applicable state law."

The Civil Rights Act protects against discrimination "on the grounds of race, color, religion, or natural origin" in public places.

While face coverings and temperature checks have become largely accepted by health experts and politicians, requiring individuals to wear them in a store does not appear to be discriminatory.

Currently, there is no national mask mandate.

The Centers for Disease Control and Prevention recommends for all people over the age of two to wear a mask in public and "when around people who don't live in your household" when you are unable to practice other social distancing measures.

On their website, the CDC acknowledges groups of people that should not wear mask.

It is limited to children younger than two, anyone who has trouble breathing, is unconscious, incapacitated or unable to remove a mask without help.

Related posts:
Incredible Conor McGregor throwback picture emerges from 2008 MMA debut with clean-shaven UFC star having NO tattoos
Senate Republicans to introduce new plan for $1,200 stimulus checks TODAY and could set up vote 'as soon as this week'
Popular News
F2 Russian GP abandoned after Luca Ghiotto and Jack Aitken in ‘frightening’ fireball smash but both escape unhurt
27/09/2020
Man Utd wonderkid Ramon Calliste, called ‘the next Giggs’, now owns luxury watch business and makes £5m a year – The Sun
26/03/2020
Megan Thee Stallion Addresses Criticism Over Twerking: ‘I Love to Shake My A**’
26/03/2020
Police guard shops to stop coronavirus panic-buyers and enforce social distancing – The Sun
26/03/2020
Coronavirus: Good Morning Britain’s Dr Hilary reveals ‘game-changing’ self-testing kit
26/03/2020
Recent Posts
This website uses cookies to improve your user experience and to provide you with advertisements that are relevant to your interests. By continuing to browse the site you are agreeing to our use of cookies.Ok