This is the shocking moment an irate man launches a verbal tirade at a fellow shopper for allegedly flouting the Government’s social distancing guidelines while queueing at Sainsbury’s.

The incident, which is believed to have taken place outside a Sainsbury’s store in South East London on April 4, shows the furious customer slam the woman for allegedly refusing to maintain the 6ft gap required to prevent the spread of COVID-19.

However after the woman, who is wearing gloves and a protective mask, attempts to walk in front of the angry shopper, a heated argument ensues and the man threatens to ‘knock her out’.

During the footage, the furious shopper, who is pushing a trolley in the queue outside the supermarket, erupts in anger when he sees the woman behind him. 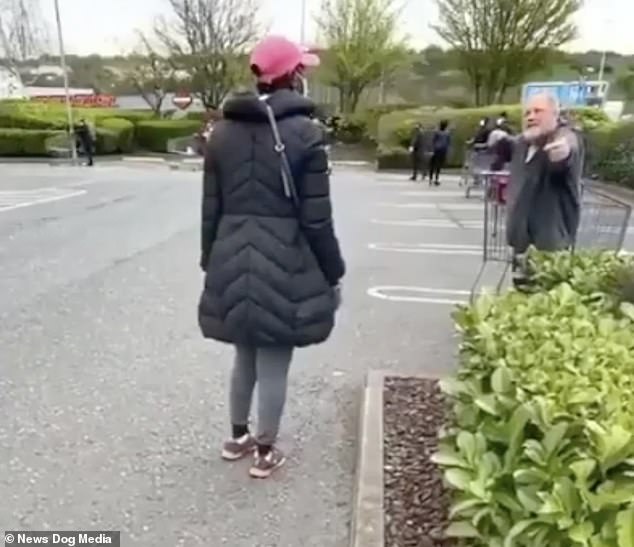 The infuriated man shouts: ‘Don’t you know what two metres is. Are you thick?’

The woman, who is dressed in a black coat and pink cap, shouts back at the angry customer before he cuts her off and replies: ‘No you’re thick! You’re thick.’

Startled shoppers soon begin to look at the ensuing argument as the the man continues to look back at the woman and yell: ‘There’s nothing wrong with me.

As the queue moves forward, the woman appears to tell the man to go ahead but he retorts back: ‘I don’t want to go ahead! I’ll go in when I feel like it!’

The woman then appears to try and go ahead of the irate man before he pushes his trolley forward and shouts: ‘You go in front of me and I’ll f***ing knock you out!’ 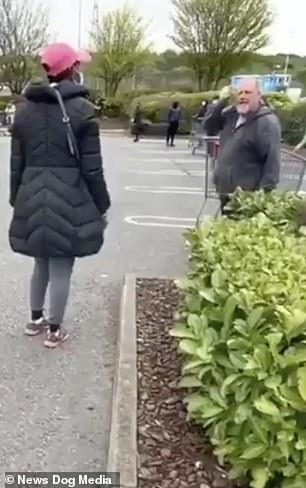 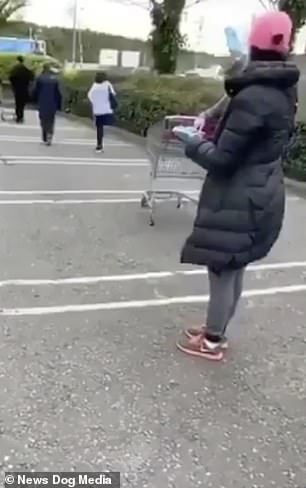 The furious shopper continues to shout at the woman as the queue moves forward and tells her: ‘I’ll knock you out!’

However the woman argues back and responds: ‘Come at me! Come at me!’.

It is unknown who filmed the footage however the clip has been circulated widely on social media.

According to Government guidelines, British shoppers are reminded to adhere to social distancing rules by remaining 6ft (two-metres) away from others to help prevent the spread of coronavirus.

The shocking scenes come as the nation continues to control the surge in coronavirus cases which has now hit 47,806.

Yesterday health officials also confirmed that 4,934 people in the country have now died from COVID-19.