Washington state troopers believe it is ‘miraculous’ that nobody was injured during a high-speed chase on Sunday afternoon involving a car with a pit bull in the driver’s seat.

The animal’s owner, Alberto Tito Alejandro, 51, from Lakewood, Washington, was arrested after ‘trying to teach his dog how to drive’, hitting two cars and failing to stop while driving at speeds up to 109 mph.

It is alleged he was under the influence of drugs.

After he was spotted driving ‘erratically’ around 1pm, the suspect dragged troopers on a high speed chase up Interstate 5 that only came to a halt when spike strips were used to end the pursuit.

Troopers have described the pit bull as a ‘very sweet girl’. She was taken to an animal shelter after her owner’s arrest. 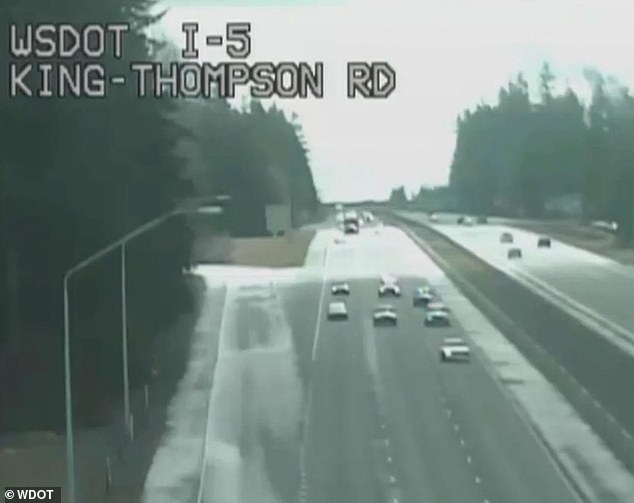 Troopers are seen in footage speeding down the interstate after the 1996 Buick after it crashed into two cars without stopping. As they attempted to corner the car, the troopers noticed that there was a pit bull in the driver’s seat as its owner steered the car from the passenger’s seat 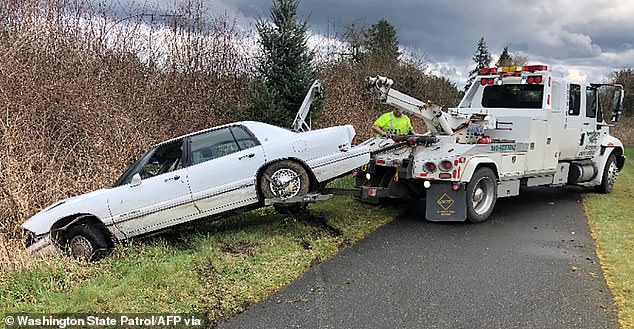 Washington State Troopers who used spike strips to disable the vehicle and end the chase near Seattle said they found a pit bull behind the wheel. The animal’s owner, Alberto Tito Alejandro, 51, claimed he was teaching the dog to drive. Alejandro’s vehicle is pictured after the incident

No injuries were reported from either crash but Alejandro has been charged with with reckless endangerment, hit and run, driving under the influence and felony eluding.

He was taken to hospital after being booked for multiple felonies.

The incident unfolded Sunday afternoon after police received calls about a driver hitting two vehicles in an area south of Seattle and then speeding away, 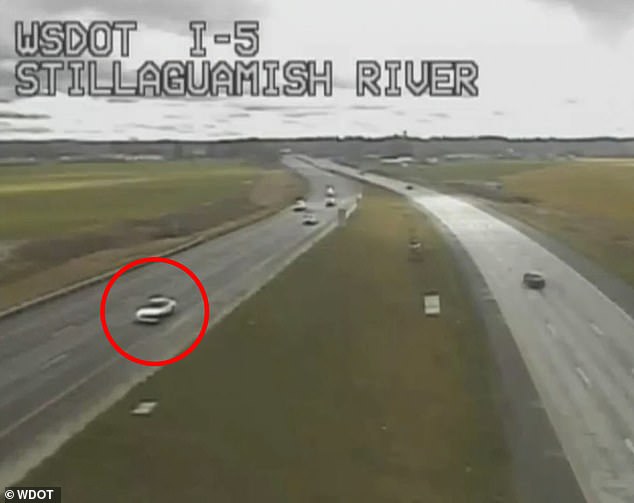 The car is seen here driving a speeds of over 100mph before troopers used a spike strip to stop the chase. Alberto Tito Alejandro was arrested and brought to hospital after being booked

Axtman said that as officers gave chase, they got close to the vehicle – a 1996 Buick – and attempted to corner it.

In doing so they were shocked to see a pit bull in the driver’s seat and Alejandro steering and pushing the gas pedal from the passenger side.

Troopers became concerned when Alejandro moved the chase on Centennial Trail, a busy pedestrian and bicycle pathway in Snohomish County.

‘The fact that there wasn’t anybody on the trail is nothing shy of miraculous,’ Axtman said.

‘We are very thankful.’

The pursuit ended at Kackman Road and Grandview Trail after police deployed spike strips and arrested the dog owner.

‘When we took him into custody… he admitted to our troopers that he was trying to teach his dog to drive,’ Axtman said.

‘I wish I could make it up.

‘I’ve been a trooper for almost 10 years and I’ve had a lot of excuses when I’ve arrested people or pulled people over, but I’ve never had an excuse that the dog was driving,’ she added, laughing.

Axtman said the female pit bull, which was not aggressive toward the arresting officers, had been placed in an animal shelter.