Three people have been critically injured after a stabbing at a central Dunedin supermarket.

Two others were moderately injured in the incident, which happened on Monday at the central Dunedin Countdown. Armed police are on the scene and one person has been taken into custody. 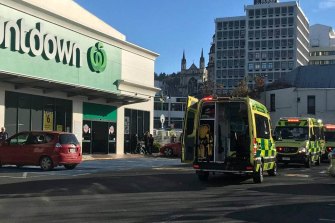 Emergency services at a Countdown supermarket in central Dunedin.Credit:Hamish McNeilly/Stuff

The attack took place at a Countdown supermarket in the city on the South Island at around 2.30pm New Zealand time (12.30pm AEST)

An Otago Daily Times journalist reported that one person was put into an ambulance with an apparent neck wound.

A police spokesman said: “Police are responding to an incident in central Dunedin. It occurred on Cumberland St at about 2.30pm. Initial information suggests several people have been injured. One person has been taken into custody.”

One witness at the supermarket said: “It just sounded like someone fell over and then screaming got louder and louder.

“We walked past the aisle and we heard someone say, ‘he has got a knife’, so we just kept moving forward.”

New Zealand radio Newstalk ZB reported that a witness was at the checkout when she heard someone else say someone “had a knife”.