‘We can’t lock the UK down again’: Scientists, MPs and industry leaders warn Boris another coronavirus shutdown could cripple the country

Boris Johnson was last night urged to think very carefully before imposing a new lockdown in response to a spike in virus cases.

Business leaders, MPs and scientists told the Prime Minister to consider other options first, with one think-tank warning a second shutdown would be ‘catastrophic’.

Concern within government was prompted by figures on Sunday showing there had been 2,988 new infections in the previous 24 hours, the highest daily rate since May 22.

Monday’s numbers were at a similar level, with an additional 2,948 positive cases up to 9am, a jump from the 1,175 reported on Saturday. The latest death toll of 30 was the highest in six weeks.

But Christopher Snowdon of the Institute of Economic Affairs said: ‘With UK case numbers at a fraction of where they were back in March, a second lockdown would be catastrophic and should be avoided. 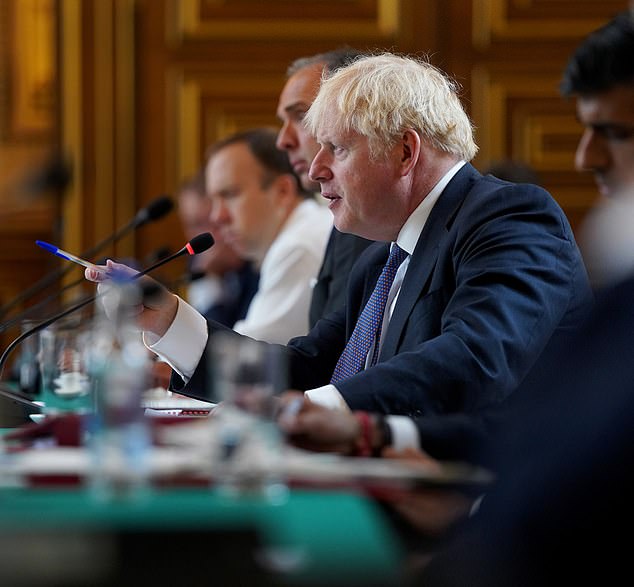 Business leaders, MPs and scientists told the Prime Minister to consider other options before going into a second nation-wide lockdown, with one think-tank warning a second shutdown would be ‘catastrophic’ 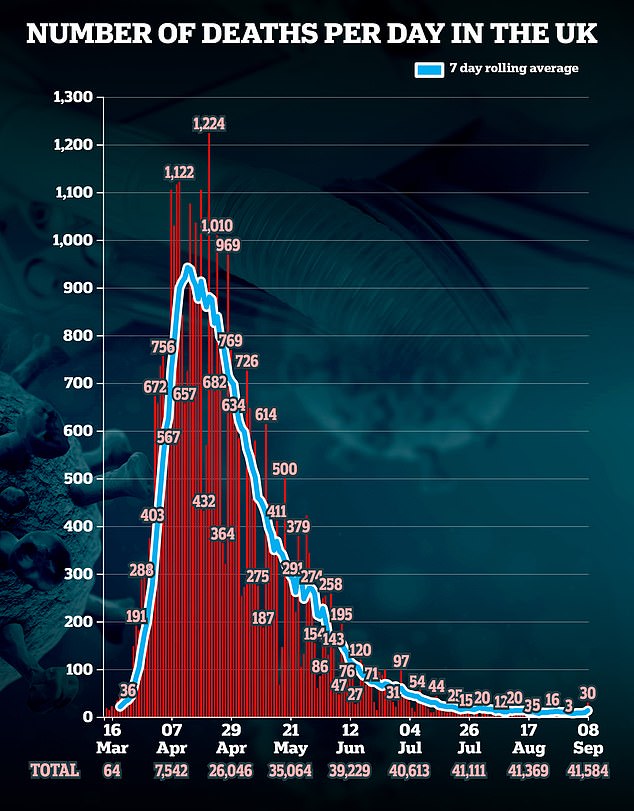 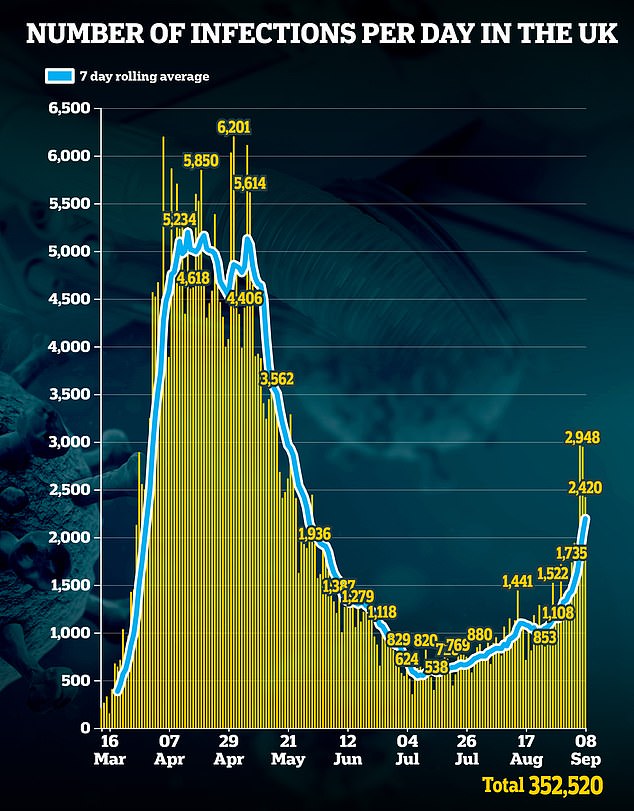 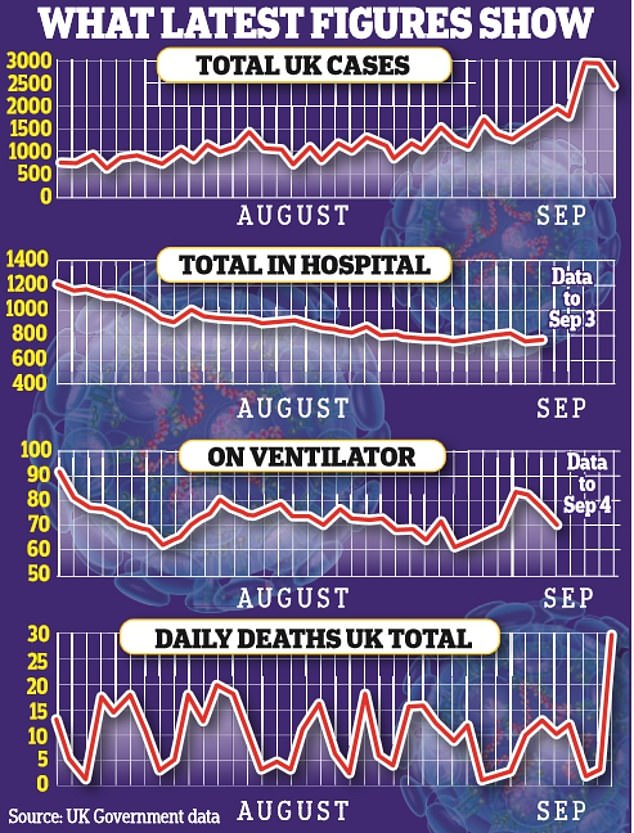 ‘Sweden has shown us a more sensible way to balance risk, liberty and the economy. The Government’s justification for the nationwide lockdown in March was to protect the NHS. After six months of preparation, it is very unlikely that the NHS will be overwhelmed by a second wave.’

Mike Cherry of the Federation of Small Businesses said the first national lockdown was incredibly damaging, adding: ‘If we can avoid a second through the utilisation of alternative measures to contain the virus, that would give hope to a lot of small firms as they try to get back on their feet.’

Tej Parikh of the Institute of Directors said business leaders would be flinching at the prospect of a return to heavy restrictions.

‘It’s paramount that whatever measures have to be taken, the support for businesses matches them,’ he said.

‘The Government should also be wary of withdrawing existing support too quickly, as the virus isn’t done and dusted yet.’ 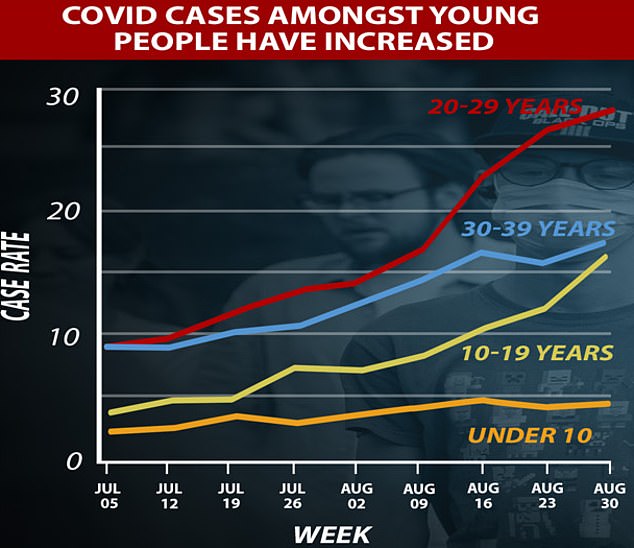 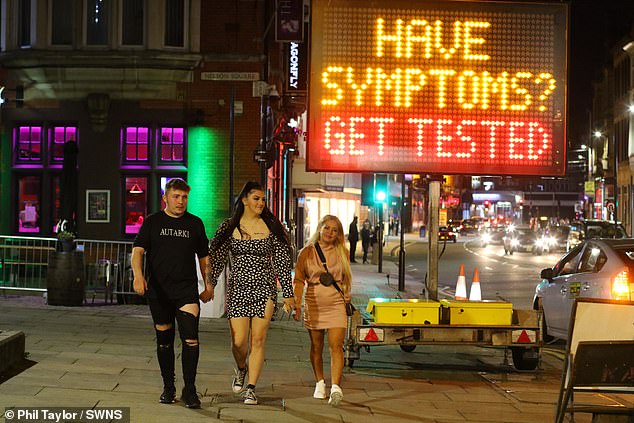 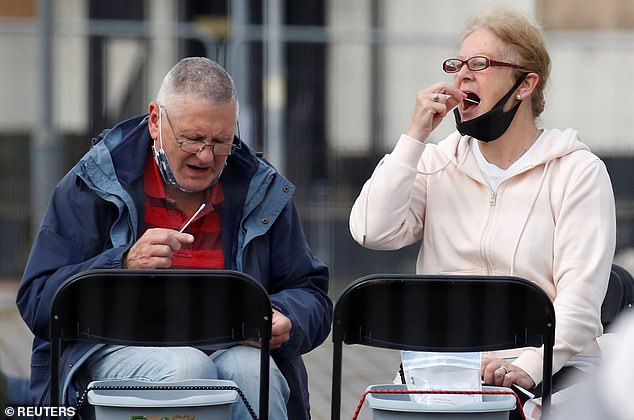 Concern within government was prompted by figures on Sunday showing there had been 2,988 new infections in the previous 24 hours, the highest daily rate since May 22. Pictured: People taking a coronavirus test at a walk-in facility in Bolton

Shaun Fitzgerald, a Cambridge professor and government adviser on social distancing, urged the public to take more responsibility. He said: ‘Perhaps the question should be ‘could I be doing something differently to help?’ For example, can I reduce the frequency I go to the shops by planning ahead more rigorously with my grocery shopping?

‘Am I washing my hands as regularly as lockdown? There are lots of things perhaps which we can all do to help.’

‘This will be a hammer blow to the economy just as we were starting to get things on track.

‘Why is it that we are having this ‘push me pull you’ approach? This can’t go on.’

Former environment secretary Theresa Villiers said: ‘Going back into lockdown would be a huge setback for the economy. I hope the Government will exhaust all other possible options before they consider the drastic step of closing down the economy all over again.’

Yesterday Health Secretary Matt Hancock said he would not ‘shy away from taking targeted local action’, such as that imposed yesterday in Bolton.

Related posts:
Get Your Shopping List Ready 'Cause Sephora Collection’s Holiday Sets Are Here
'Keeping Up With the Kardashians' to End in 2021
Popular News
Richard Mille's Rafael Nadal RM 27-04 Tourbillon Sees a Tennis Racket Dial
25/09/2020
Man Utd wonderkid Ramon Calliste, called ‘the next Giggs’, now owns luxury watch business and makes £5m a year – The Sun
26/03/2020
Megan Thee Stallion Addresses Criticism Over Twerking: ‘I Love to Shake My A**’
26/03/2020
Police guard shops to stop coronavirus panic-buyers and enforce social distancing – The Sun
26/03/2020
Coronavirus: Good Morning Britain’s Dr Hilary reveals ‘game-changing’ self-testing kit
26/03/2020
Recent Posts
This website uses cookies to improve your user experience and to provide you with advertisements that are relevant to your interests. By continuing to browse the site you are agreeing to our use of cookies.Ok