The sauce of long delays! Lorry load of tomato puree spills, bringing chaos to the A14 in Cambridgeshire

Social media users have shared their best puns after pictures revealed the ‘sauce’ of long delays on a busy road as two lorries collided.

Tomato puree was left leaking out onto the 23-mile strech of dual carriageway after a pair of HGVs collided near the Offord junction on the A14, Cambridgeshire.

The incident prompted huge delays as the road was shut for more than 10 hours after urgent resurfacing works were required.

But Twitter users poked fun at the pictures that emerged online, with many offering up their best puns in response.

One user wrote: ‘Drivers warned to passata safe speed.’ While another asked: ‘When will traffic be able to ketch up?’ 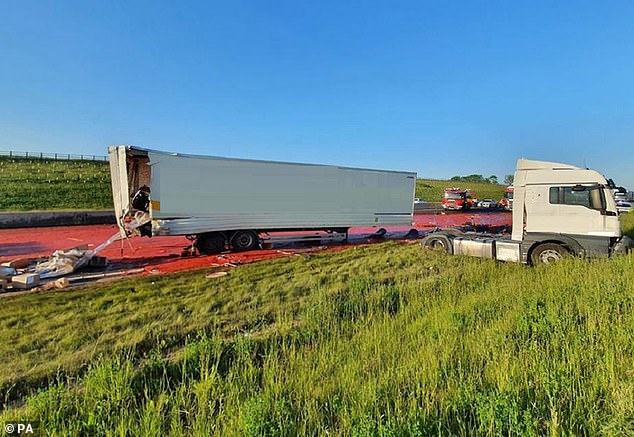 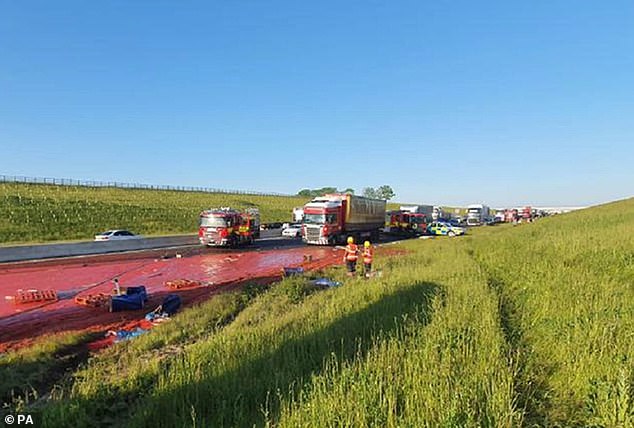 The crash happened on the A14 near Godmanchester in Cambridgeshire yesterday evening.

A lorry carrying tomato puree and tons of olive oil jack-knifed on the busy dual carriageway and shed its load – causing the thick sauce to flood the A14.

The driver of one of the HGVs was hospitalised following the crash but was later discharged.

Cambs Police wrote on Twitter: ‘What looked like the set of a horror film was actually thousands of squashed tomatoes.

‘The incident on the A14 at Godmanchester yesterday evening involved two jack-knifed lorries, including one carrying tons of olive oil and tomatoes. 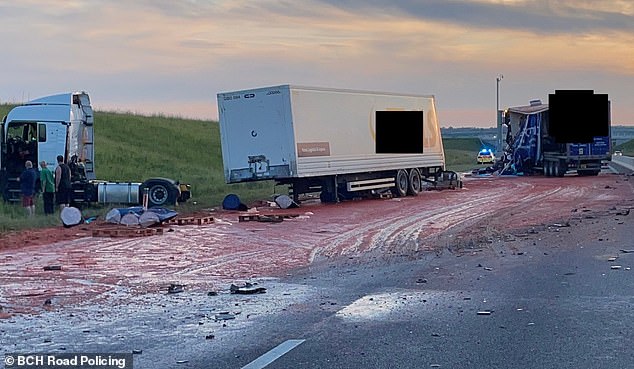 Hundreds of social media users poked fun at the tomato-laden disaster with their juiciest jokes and puns.

Craig Lyons said: ‘I went pasta that. Took a while for the traffic to ketchup.’

While @simonscider chided: ‘Big cheer to all the emergency services and clear up crew. Hip Hip Puree!!’

The Beds, Herts and Cambs road policing unit explained the tomato puree was being kept in drums full of oil – which caused the road to require emergency repairs.

This afternoon, @BCHRoadPolicingUnit tweeted a picture of the wreckage and said: ‘The collision from 01/06/21 which we attended yesterday.

‘This has caused the road to be closed for resurfacing.

‘2 vehicles. One driver injured, fortunately not too seriously.

‘The red stuff over the road is tomato! Investigation ongoing.’