Ravaging wildfires are burning further north in the Russian Arctic than had previously been recorded from space.

Images captured by a satellite have shown an out-of-control inferno just 30 miles from the Arctic Ocean in the Yakutia region.

It comes in a summer of unprecedented heat in northern latitudes in Siberia with locals sunbathing, with one extraordinary temperature measurement reading 100.4 degrees Fahrenheit in the ‘pole of cold’ Verkhoyansk in the last week.

The European Union’s Earth Observation Programme spotted the tundra ablaze at a latitude of 72.723° N in the diamond-rich Yakutia region, also called the Sakha Republic, the coldest permanently inhabited region on the planet.

The image shows the burning Anabar district, southwest of the Olenyok River estuary into the Laptev Sea.

The wildfire was photographed by the Copernicus Sentinel-2 satellite and is believed to be the ‘northernmost in recent years within the Arctic Circle’.

‘While fires are common at this time of year, record temperatures and strong winds are making the situation particularly worrying,’ said a statement from the programme. 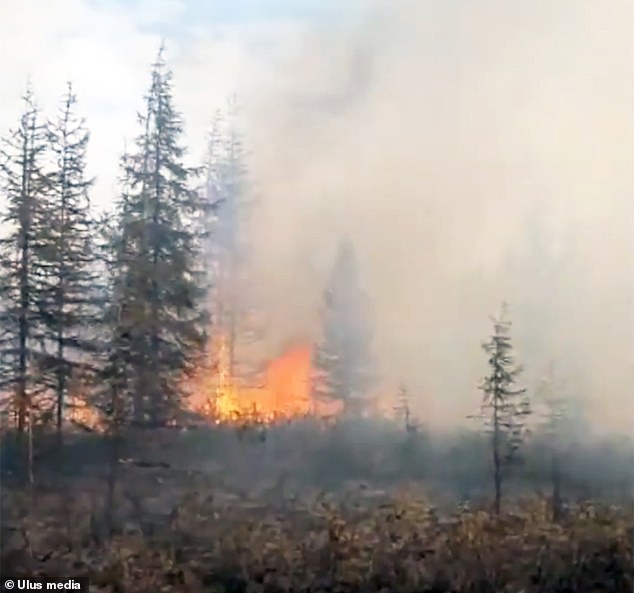 Pictured: Wildfires just 20 km away from the Arctic town of Chersky during a summer of unprecedented heat in northern latitudes in Siberia 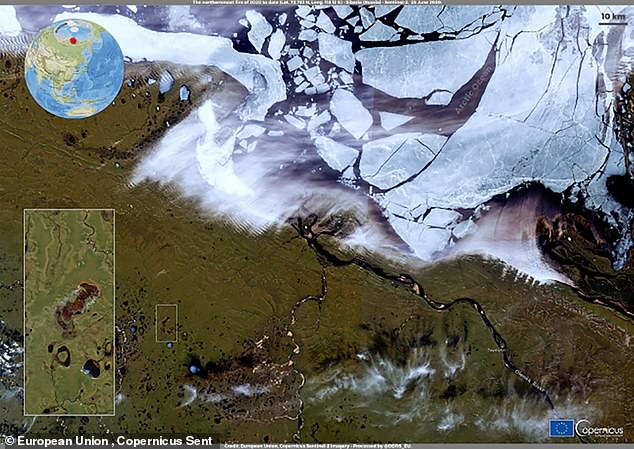 The wildfire was photographed by the Copernicus Sentinel-2 satellite and is believed to be the ‘northernmost in recent years within the Arctic Circle’. Smoke can be seen at the bottom of the image rising from the forests, just 30 miles from the Arctic sea

The fire is less than eight miles north of an inferno registered last year by the same satellite monitoring programme which uses infrared sensing capabilities to detect active fires.

Pictures and videos show fires in the tundra around Chersky, in the north of Yakutia, reported the Siberian Times.

Firefighters are battling to save remote settlements in eight districts including Verkhoyansk which a week ago registered the remarkable 100.4 F temperature.

Pleistocene Park – a project to recreate the flora of the woolly mammoth age – narrowly missed being destroyed by raging flames.

‘The Arctic is figuratively and literally on fire — it’s warming much faster than we thought it would in response to rising levels of carbon dioxide and other greenhouse gases in the atmosphere, and this warming is leading to a rapid meltdown and increase in wildfires,’ said University of Michigan environmental school dean Jonathan Overpeck, a climate scientist.

‘The record warming in Siberia is a warning sign of major proportions.’ 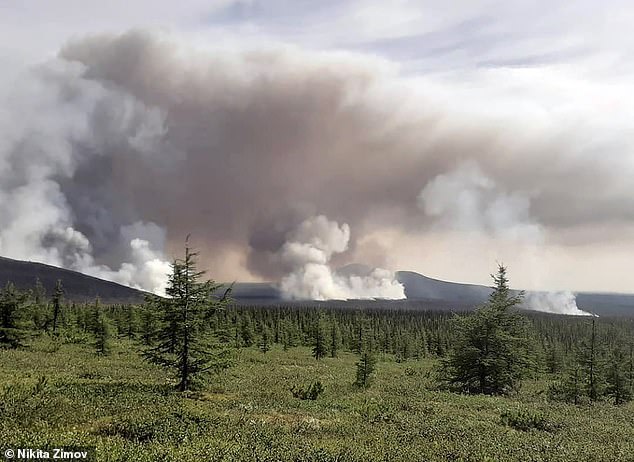 Pictured: Smoke from the wildfires can be seen rising from miles away, which are just 30 miles from the Arctic Ocean in the Yakutia region 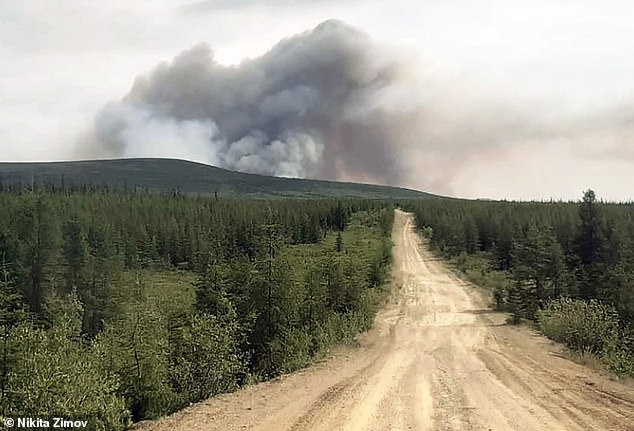 One extraordinary temperature measurement reading 100.4 degrees Fahrenheit in the ‘pole of cold’ Verkhoyansk in the last week

Such prolonged Siberian warmth has not been seen for thousands of years ‘and it is another sign that the Arctic amplifies global warming even more than we thought’, he said.

Many locals rushed to local lakes and rivers to soak up the Saudi-like weather.

This hot summer – which follows a gradual rise in recent years – has seen temperatures up to 57 F above those expected for the time of year, said Roman Vilfand, scientific director of the Russian Hydrometeorological Centre.

An alarming consequence has seen thawing permafrost which has caused buildings to crack and subside in Yakutia’s regional capital Yakutsk – the world’s coldest city – and several cases of fuels storages becoming holed and pollution spreading over the Arctic. 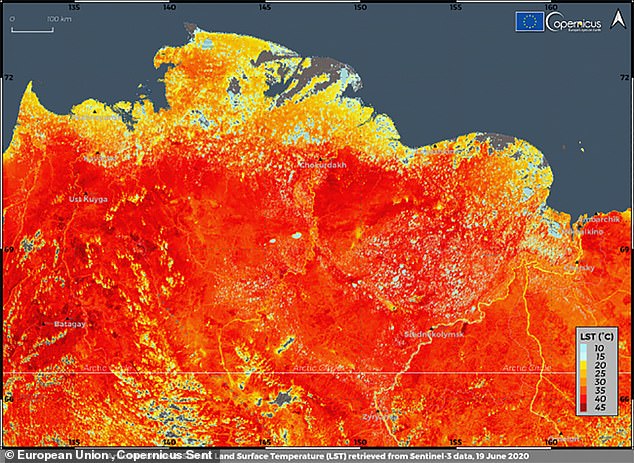 The heatwave, as shown from the Copernicus Sentinel-2 satellite’s temperature tracker, has reached temperatures in the high 30 degree Celsius mark (around 100 F)

Meanwhile, a major 21,000 ton diesel leak occurred near Norilsk, in Krasnoyarsk region, due to permafrost thawing, and now threatens the Arctic Ocean.

Russian Academy of Sciences’ President Alexander Sergeyev said: ‘We should organise a total monitoring of both industrial and housing buildings on the permafrost.

‘If the permafrost degrades, all those buildings will begin to slide. This task is of the highest importance.

‘I hail the idea, which has been supported by President Vladimir Putin, to have a new programme to monitor the climate and consequences from the climate changes.’ 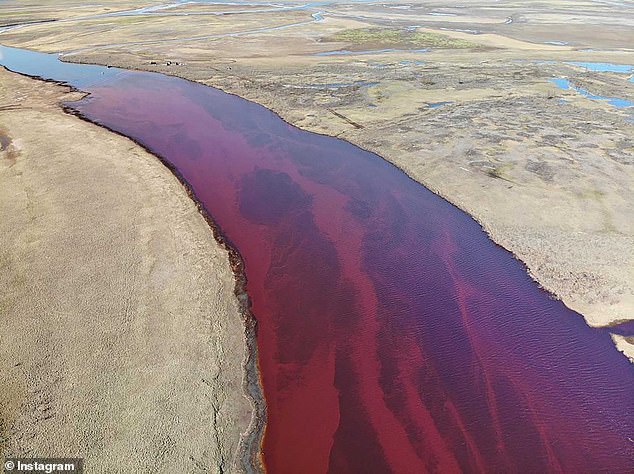 The scale of the spill has been compared to the Exxon Valdez accident near Alaska in 1989, in which an oil tanker spilled 10.8 million US gallons of crude oil into the ocean 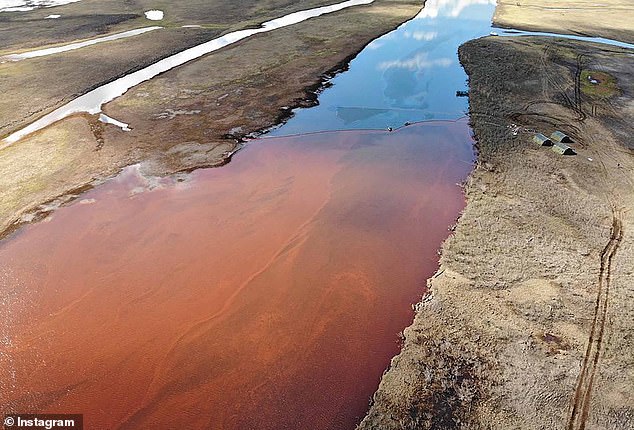 An aerial image of the river that has turned red due to the diesel that has spilled into it from a nearby power station’s oil tank in Russia. The leak happened on May 29, 2020

The spill occurred when a diesel reservoir collapsed at a power station outside the northern Siberian city of Norilsk on May 29, releasing vast quantities of fuel into the river and surrounding soil, according to Russia’s state environmental watchdog.

Shocking overhead videos revealed the horror unfolding in the Ambarnaya River near Norilsk in the Russian Arctic as one expert forecast the clean-up cost will reach £1.16 billion.

There are fears the pollution could spread to the Great Arctic State Nature Reserve, the largest nature reserve in both Russia and the Eurasian continent, and damage fish stocks for generations.

Russian President Vladimir Putin has ordered a state of emergency to deal with the disaster.

Putin was furious that he was not informed of the spill earlier, and on Wednesday he publicly scolded officials and oil managers over a video conference call for having to hear about the spill on social media, and for their handling of the crisis.

Videos from the scene highlight how the river is now covered in a crimson-coloured toxic layer of diesel, some 1,860 miles northeast of Moscow.

Some officials fear the only way to clear the pollution is to set it ablaze, which would cause a second environmental horror.

A Glossary Of Anti-Racism Terms All Activists & Allies Should Know
Why Christina Aguilera Was Asked to Use a Stage Name
Popular News
Major energy supplier to pay thousands of customers up to £100 to use less energy this winter – how to get it | The Sun
29/11/2022
Man Utd wonderkid Ramon Calliste, called ‘the next Giggs’, now owns luxury watch business and makes £5m a year – The Sun
26/03/2020
Megan Thee Stallion Addresses Criticism Over Twerking: ‘I Love to Shake My A**’
26/03/2020
Police guard shops to stop coronavirus panic-buyers and enforce social distancing – The Sun
26/03/2020
Coronavirus: Good Morning Britain’s Dr Hilary reveals ‘game-changing’ self-testing kit
26/03/2020
Recent Posts