SAGE has urged the Government to make Brits wear face masks outdoors while the country grapples with the highly-infectious Kent coronavirus variant.

In a recommendation made on January 13, experts said advice on face masks ‘should be strengthened’ to deal with the devastating winter wave of infections.

The group called for people to consider wearing them outside in crowded areas including parks, supermarket queues or outdoor markets.

They said it is possible the Kent variant can infect people within a short exposure window, which makes mask wearing an even more ‘important mitigation strategy’.

SAGE stressed that while masks play only a small role in overall transmission nationally, widespread usage could help contain the spread of the new variant.

The recommendation echoes comments made by England’s chief medical officer Chris Whitty, who admitted there was a ‘risk’ when people huddled closely even outside.

So far the Government has resisted calls to make face coverings compulsory outdoors, but not wearing one on public transport or in indoor public spaces is still punishable with fines of up to £200. 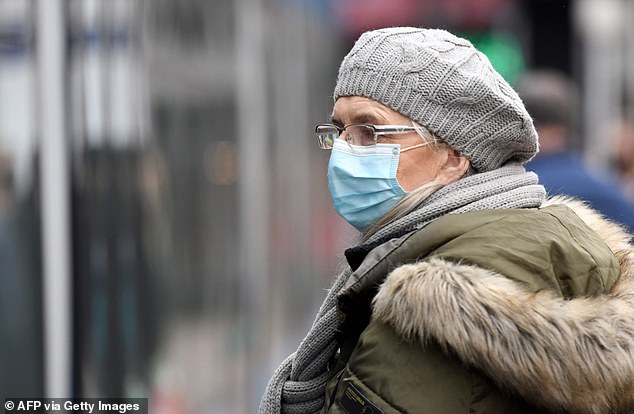 The January 13 paper, submitted to Government by the SAGE Environmental and Modelling group (EMG) group, said: ‘Consideration should be given to using face coverings in a wider range of settings where people could be asymptomatic and may be in close proximity (<2m).

China exported more than 220 billion face masks in 2020, the equivalent of nearly 40 per person outside of the country.

Demand for protective equipment has skyrocketed after the breakout of the coronavirus pandemic which began in China in late 2019.

The surge in exports helped the country become the only major economy in the world to grow last year after its Communist leaders covered up the crisis in its early stages and quickly contained the virus. 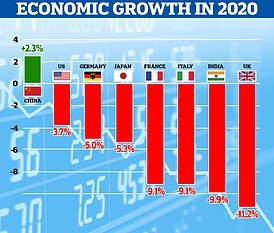 China’s GDP grew by 2.3 per cent in 2020, making it the only major economy likely to record economic growth in the year of the pandemic

China shifted billions of dollars’ worth of the coverings which have become essential items around the world.

On Friday, vice-minister for commerce Qian Keming told reporters that in addition to masks, China exported 2.3billion pieces of protective gear and one billion test kits last year, ‘making an important contribution to the global fight against the epidemic’.

The mask shipments alone were worth 340 billion yuan (£38.5billion), a customs official said this month.

‘(The volume) is equivalent to providing nearly 40 masks to each person in the world outside China,’ said customs spokesman Li Kuiwen.

China, where Covid-19 first emerged in late 2019, was also the first country to bounce back after imposing strict lockdowns and virus control measures.

Its economy grew by 2.3 per cent in 2020, official figures revealed this month, making it the only major economy to grow at all last year.

‘This may include outdoor spaces where it is difficult to maintain distance and people may be close together for extended periods (medium confidence). ‘

It added: ‘As a precautionary measure it is recommended that public advice on wearing of fabric face coverings should be strengthened to more effectively promote their correct wearing, good hygiene practices associated with their use, and advice on the selection of effective face coverings (medium confidence).

‘Although there are uncertainties in the reasons why the B117 [Kent] virus variant is more transmissible, the behaviour of respiratory particles is not likely to have changed (high confidence).

‘It is possible that transmission can happen with a reduced duration of exposure to someone who is infectious (medium confidence).

‘Physical distancing and use of face coverings are therefore both important mitigation strategies to reduce transmission of SARS-CoV-2.

‘However, these mitigation measures are likely to be needed to be applied more consistently and effectively to be able to mitigate transmission of the B117 variant (high confidence).’

Professor Whitty told BBC Radio 4 there was a ‘risk’ of Covid-19 in ‘crowded’ outdoor environments such as a ‘queue’.

On the Today programme, he said: ‘If people for example are crowded together in a queue outdoors, if they’re really huddled together round a market stall or something – that is a risk with this virus – and in that situation, there might be some logic to people thinking about wearing masks.’

Asked if people should wear masks every time they leave the house, he said the most important thing was actually that people stayed home.

‘I think that the much more important thing is that people should not be leaving their home unless they absolutely have to. And where they do, try and keep their distance from people.’

Under current rules, Britons can only leave their homes for ‘essential’ reasons, including an hour of exercise with one other person or with their household or support bubble, going to work if they are a critical worker, caring for a loved one or food shopping.

But there are fears within Government the rules are ‘being used as an excuse for people to go for a coffee in the park with their friends’.

London’s Borough Market became the first outdoor space in the UK to legally enforce the wearing of face masks earlier this month.

Customers and vendors at the food and drink market face a £50 fine if they do not wear a face covering in and around the stalls.

It came after pictures taken in the market in December showed vast swathes of shoppers crammed in as they browsed through stalls.