Rishi Sunak is urged to give EVERY Briton a £500 voucher

Rishi Sunak is urged to give EVERY Briton a £500 voucher to be used in shops, hospitality and tourism in a massive £30billion package to boost the economy

A think tank has urged the Chancellor to give every adult in the UK a £500 shopping voucher in a bid to boost struggling high streets.

The Resolution Foundation has called on Chancellor Rishi Sunak to hand out vouchers totalling some £30 billion to get high streets back on their feet in the wake of the coronavirus pandemic.

The vouchers proposed by the think tank would be valid for a year in areas including face-to-face retail, tourism and hospitality, The Mirror has reported. 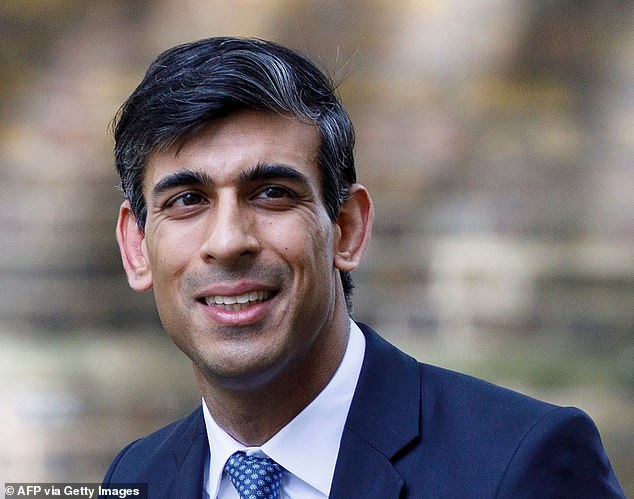 The foundation says such a policy would boost demand on the high street in turn, help firms and workers.

‘A voucher for only these sectors would support the businesses that need help most,’ Resolution’s James Smith said, according to The Mirror.

The Chancellor is set to outline policies aimed at dealing with Britain’s recovery from the coronavirus outbreak on Wednesday.

More than a million firms have claimed £25.5bn so far in wage subsidies from the Job Retention Scheme on behalf of 9.3m furloughed workers.

The lifeline, which is expected to cost £60bn by the time the scheme is wound up in October, was launched by Chancellor Rishi Sunak to prevent mass unemployment. It pays 80pc of wages up to £2,500 a month.

Rishi Sunak’s handling of pandemic sees him trounce Boris Johnson in Covid-19 poll – as he prepares for a ‘jobs, jobs, jobs’ pledge

Rishi Sunak’s handling of the Covid-19 crisis has seen his personal poll ratings surge ahead of every member of the Government – including Boris Johnson.

The findings, in an exclusive poll for today’s Mail on Sunday, come ahead of a major speech by the Chancellor on Wednesday in which he will set out his plan for Britain’s post-Covid economic recovery.

Mr Sunak’s composed performances in the Commons and at the special Covid press conferences, as he set out his emergency packages of economic support, have earned him an approval rating in the Deltapoll survey of plus 41, compared with plus eight for Health Secretary Matt Hancock and just plus two for Mr Johnson.

The boost which Mr Sunak gives to the Government’s ratings are also clear from the fact that while Labour’s Sir Keir Starmer beats Mr Johnson by 12 points in rankings of leadership ability, when voters are asked who they prefer – Mr Johnson and Mr Sunak versus Sir Keir and his Shadow Chancellor Anneliese Dodds, the Tory pair, on 48, prevail over the Labour duo’s 31.

Mr Sunak’s high personal ratings also appear to be a vindication of his ‘hawkish’ stance on the lockdown.

He has consistently argued for the mitigation of the economic damage wrought by Covid-19 against the ‘doves’, led by Mr Hancock, who have prioritised the protection of the NHS through strict social distancing measures.

Tory MPs have detected an increasing independence and self-confidence on the part of Mr Sunak, fanning talk he is already positioning himself for a run at the party leadership if it falls vacant.

Among the policies being announced by Mr Sunak on Wednesday will be a near-doubling in the number of ‘work coaches’ in job centres to 27,000, at a cost to the taxpayer of £800 million.

Mr Johnson’s speech was well-received, supported by 72 per cent of respondents. A total of 50 per cent said they expected the infrastructure splurge to make their lives better, with just 9 per cent expecting it to make it worse. 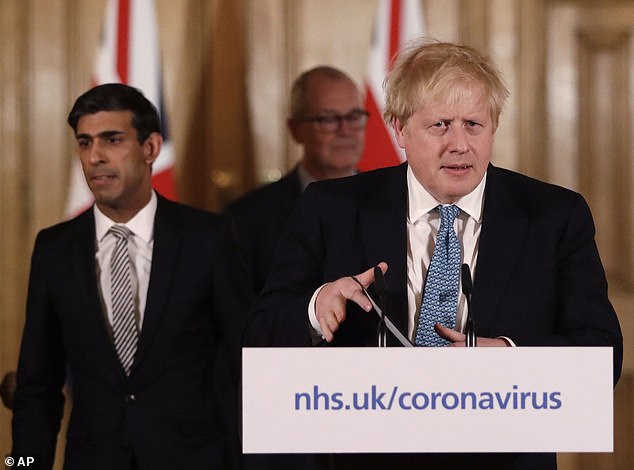 However, more people oppose the moves yesterday to relax the restrictions on pubs and restaurants opening – 46 per cent – than support – 40 per cent. An overwhelming proportion also fear the public will react irresponsibly: 66 per cent, to just 26 per cent who anticipate responsible behaviour.

The local lockdown in Leicester is heavily supported, with more than three quarters – 76 per cent – believing it is the right thing to do.

Half of all respondents support the full re-opening of schools in September, with just 8 per cent wanting it delayed until October.

The relaxation of quarantine measures for British visitors returning to the UK is unlikely to cause a surge in foreign holidays, however.

Just 9 per cent are planning a holiday abroad, with 46 per cent not expecting to take a trip this summer. 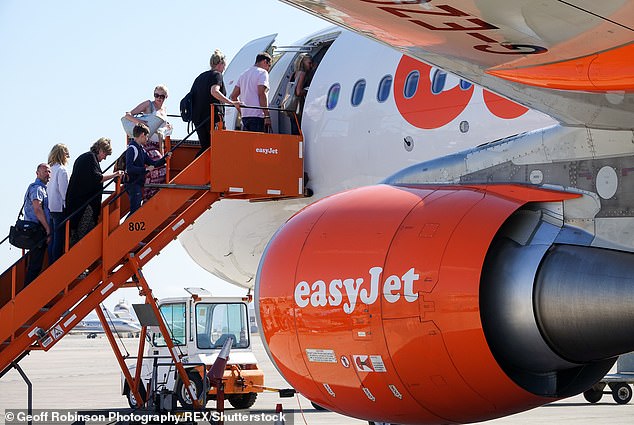 The poll also revealed just 9 per cent of British people are planning a holiday abroad this summer, with 46 per cent not expecting to travel amid coronavirus fears

Mr Johnson also loses out to Sir Keir in terms of physical fitness: after the 56-year-old Prime Minister performed press-ups during an interview in last week’s Mail on Sunday, Sir Keir, 57, jokingly challenged him to a press-up competition.

When people are asked who they think would win such a challenge, 45 per cent back Sir Keir, compared with 25 per cent who think Mr Johnson would triumph.

Joe Twyman, of Deltapoll, said: ‘During the height of the pandemic a large proportion of the British public were supportive of the actions Boris Johnson was taking.

‘Now Britons are divided over whether more recent changes are the right thing to do. A great deal will depend on what happens with the virus, but it is clear the Prime Minister can no longer take support from the majority for granted.’

Deltapoll interviewed 1,549 British adults online between July 2 and 3. The data has been weighted to be representative of the British adult population as a whole.

‘Eat out to help out’: Chancellor Rishi Sunak warns a generation of young people risk being ‘lost’ to coronavirus pandemic unless people start spending in pubs and restaurants

The chancellor warned yesterday that a generation of young people risked being ‘lost’ to the coronavirus unless the public started spending in pubs and restaurants.

Rishi Sunak asked Britons to ‘eat out to help out’ in a bid to boost the economy and avoid a jobs meltdown that will hit the young hardest.

Mr Sunak said he feared that the younger generation would otherwise be ‘scarred by coronavirus’. 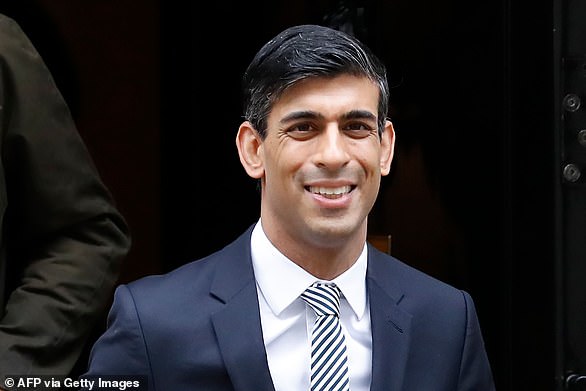 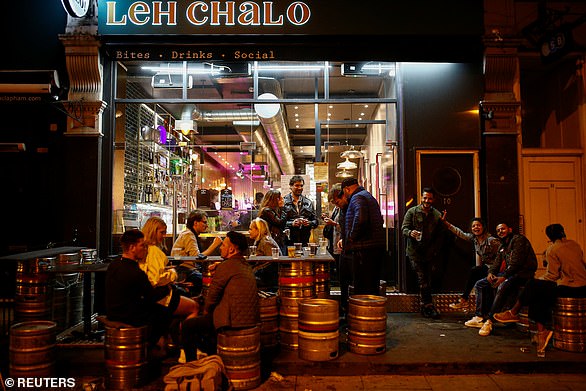 People enjoy drinks at a bar in Clapham, London, last night as pubs prepare to reopen from 6am today

He told the Times: ‘This is a consumption-driven economy; people used to, three months ago, go out with their friends or family to go and have a meal.

‘Or buy a car, or upgrade their house, or move house.

‘Go camping, come up to the Yorkshire Dales and go coast-to-coast.’ Mr Sunak added that it was important to get ‘the next few bits right’ in order to save the younger generation’s jobs and lifestyles.

The Bank of England’s chief economist Andy Haldane predicted this week that Britain was headed for a V-shaped recovery.

Addressing the comments, the chancellor said ‘we all want Andy to be right’ but conceded some hardship was inevitable.