Riot police are deployed in Myanmar as thousands rally against junta

Riot police were deployed in Myanmar today as thousands of protesters flooded the streets to demand the end of the military junta which seized power this week.

Heavily-armoured officers blocked off roads with water-cannon trucks and barbed-wire bamboo barricades as the crowds yelled: ‘Down with the military dictatorship’ in Yangon (Rangoon).

In the largest display of dissent since Monday’s coup, students and teachers joined demonstrators in donning red head bands in support of ousted leader Aung San Suu Kyi’s party in the capital.

Around 3,000 demonstrators gathered on a road near Yangon University, most holding up the three-finger salute that has come to symbolise resistance to the army takeover.

‘We are here to fight for our next generation, to free them from a military dictatorship,’ one woman at Saturday’s rally said. ‘We have to end it now.’

The demonstration came as Myanmar was plunged into its second nationwide internet blackout this week, similar in magnitude to an earlier shutdown that coincided with the arrest of Suu Kyi and other senior leaders.

Scroll down for video. 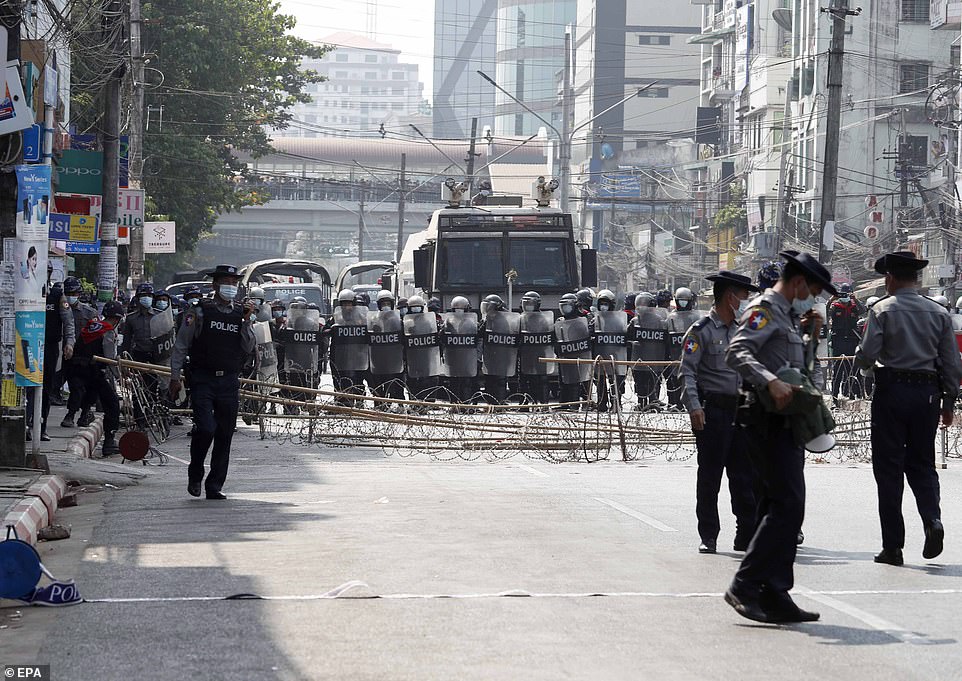 Heavily-armoured officers blocked off roads with water-cannon trucks and bamboo barricades wrapped in barbed wire as the crowds yelled: ‘Down with the military dictatorship’ in Yangon (Rangoon) on Saturday in the largest display of dissent since the coup on Monday 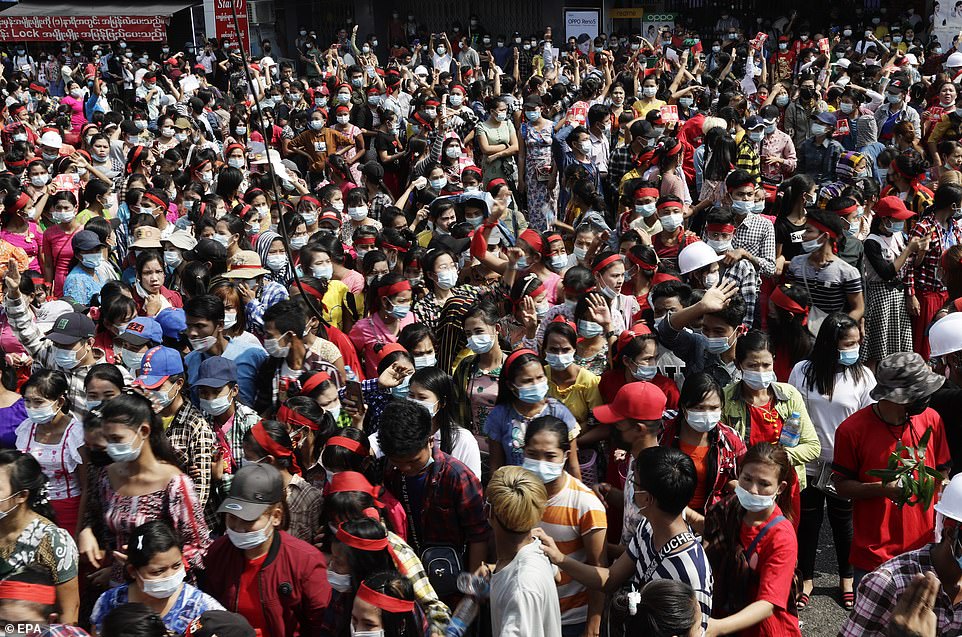 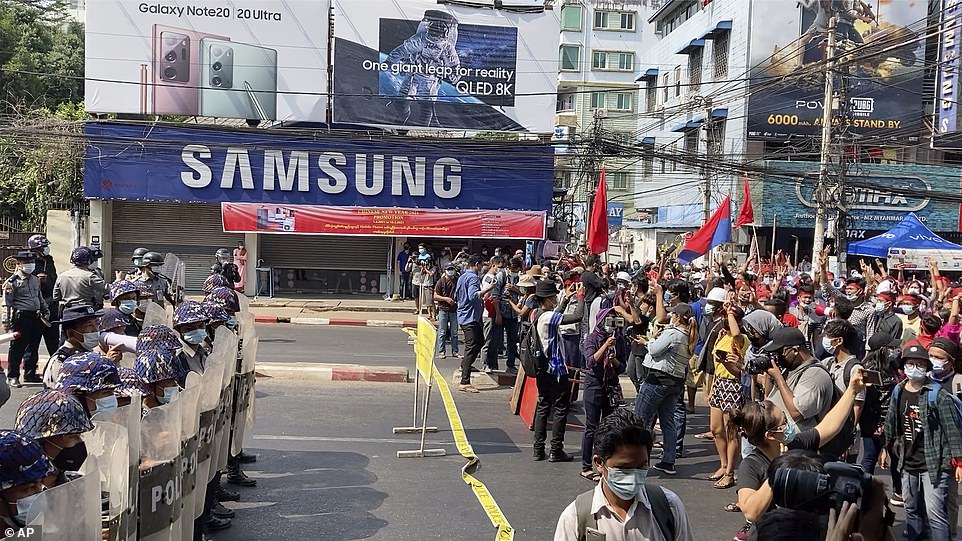 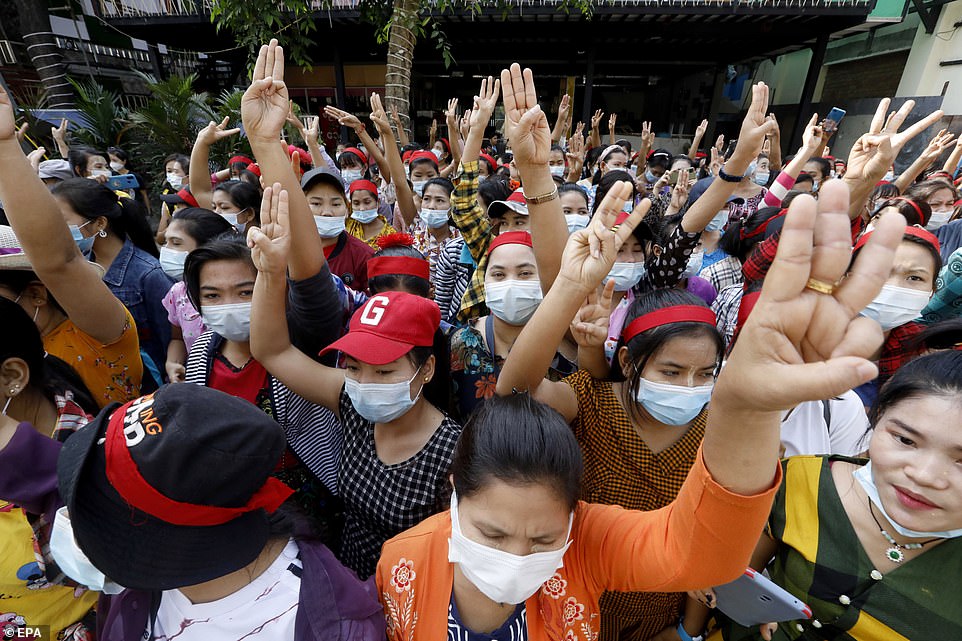 Around 3,000 demonstrators gathered on a road near Yangon University, most holding up the three-finger salute that has come to symbolise resistance to the army takeover 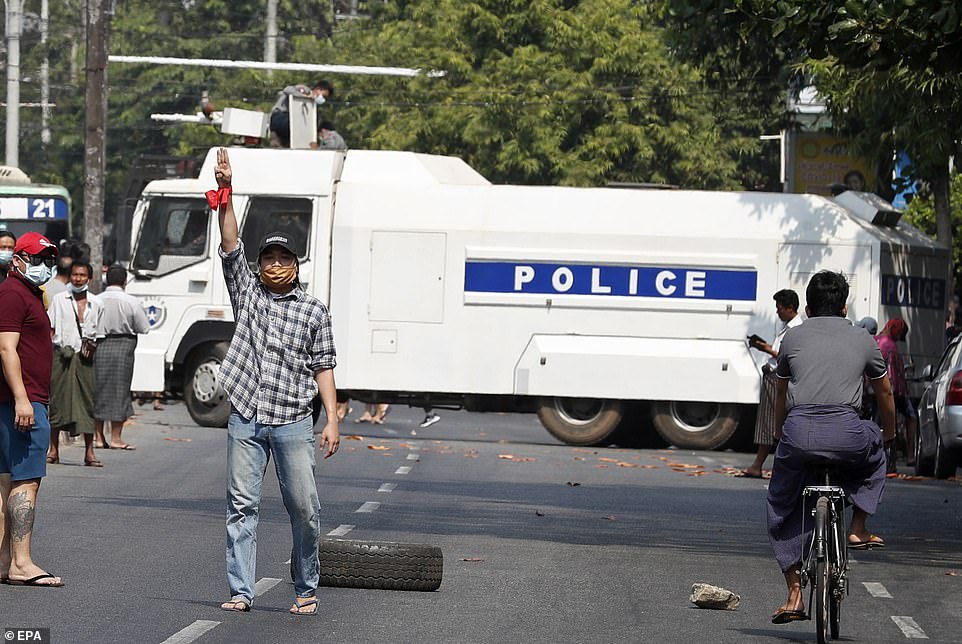 A protester flashes the three-finger salute, a symbol of resistance, near a water cannon truck blocking the road, in Yangon 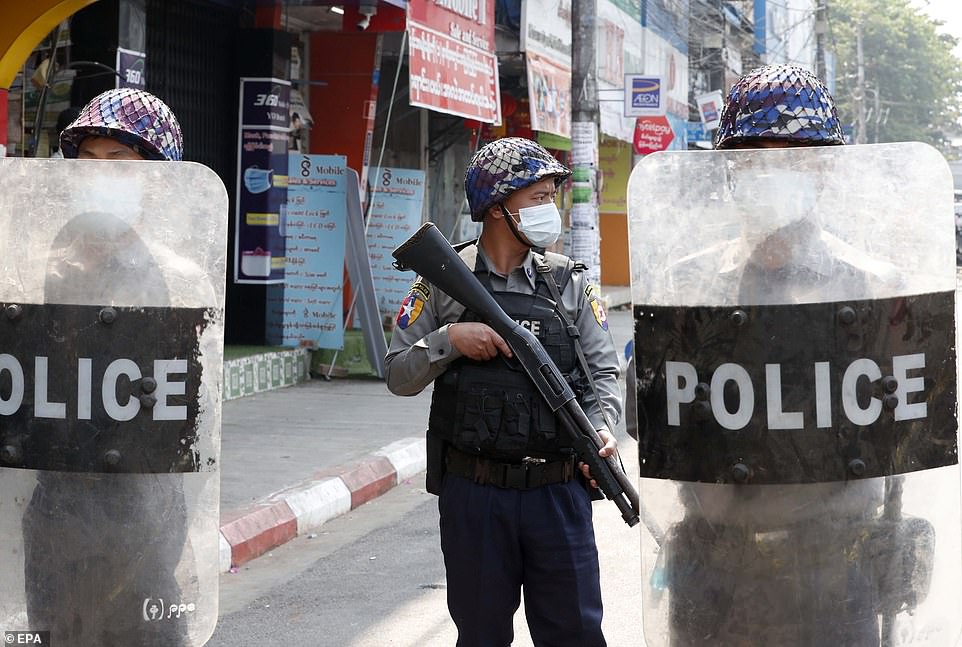 Why has the military staged a coup?

Myanmar’s military is central to the country’s political life – it led the fight for independence in 1948, formed the country’s first government, and then ruled as a junta for five decades after abandoning democracy in 1962.

That all appeared to change in 2010 with a return to democracy that saw an elected government sworn in – though in reality the military was guaranteed control of key ministries and 25 per cent of seats in parliament.

Free elections held in 2015 saw Aung San Suu Kyi’s party win a large majority with the military hammered, amid the belief that she would reform the constitution and remove the military from power altogether.

More elections held last year handed an even larger share of power to Suu Kyi, prompting fears among military top-brass that their powers were about to be removed.

On Monday, just hours before the new government was due to be sworn in, the military struck – arresting Suu Kyi, president Win Myint, and many of the country’s most-influential MPs – officially for ‘voter fraud’.

With border closures already in place and international governments distracted by domestic issues and the coronavirus pandemic, they have faced few obstacles.

‘Free’ elections will take place after the state of emergency ends, the military has claimed.

Those dawn raids brought a sudden halt to Myanmar’s brief 10-year experiment with democracy, and catalysed an outpouring of fury that has migrated from social media to the streets.

Online calls to protest the army takeover have prompted increasingly bold displays of defiance against the new regime, including the nightly deafening clamour of people around the country banging pots and pans – a practice traditionally associated with driving out evil.

Some have shown their opposition by gathering for group photographs with banners decrying the coup and flashing a three-finger salute earlier adopted by democracy protesters in neighbouring Thailand.

UN Secretary General Antonio Guterres said a special envoy to the country had made ‘first contact’ with Myanmar’s deputy military commander to urge the junta to relinquish power to the civilian government it toppled.

‘We will do everything we can to make the international community united in making sure that conditions are created for this coup to be reversed,’ he told reporters on Friday.

State media in Myanmar reported Saturday that junta figures had spoken with diplomats the previous day to respond to an international outcry and asked them to work with the new leaders.

‘The Government understand the concerns of the international community on the continuation of Myanmar’s democratic transition process,’ International Cooperation Minister Ko Ko Hlaing said in the meeting, according to the report.

As protests gathered steam this week, the junta ordered telecom networks to freeze users out of access to Facebook, an extremely popular service in the country and arguably its main mode of communication.

The platform had hosted a rapidly growing ‘Civil Disobedience Movement’ forum that had inspired civil servants, healthcare professionals, and teachers to show their dissent by boycotting their jobs in civil service and hospitals.

The military widened its efforts to stifle dissent on Friday when it demanded new blocks on other social media services including Twitter.

Norway-based Telenor said its local phone company had been instructed to cut access to the platform late on Friday, adding it had ‘challenged the necessity’ of the directive.

An apparent ministry document ordering the blockade – seen by AFP but not verified – said Twitter and Instagram were being used to ’cause misunderstanding among the public.’

Some internet-savvy users had managed to circumvent the social media block by using VPN services but by midday, online traffic had slowed to a standstill. 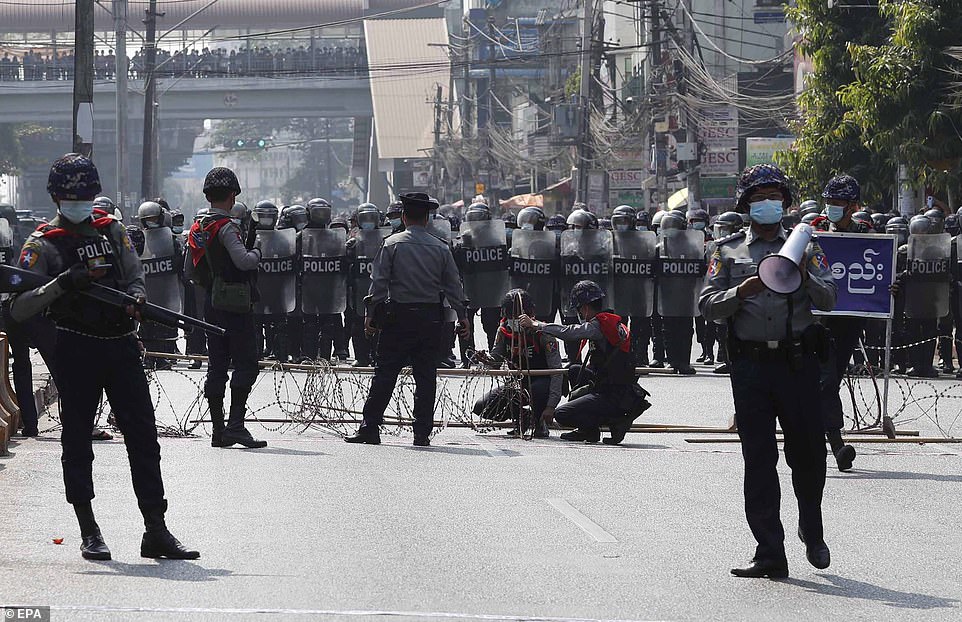 Riot police block a road in Yangon on Saturday, as an officer with a loudhailer barks at the demonstrators to go home 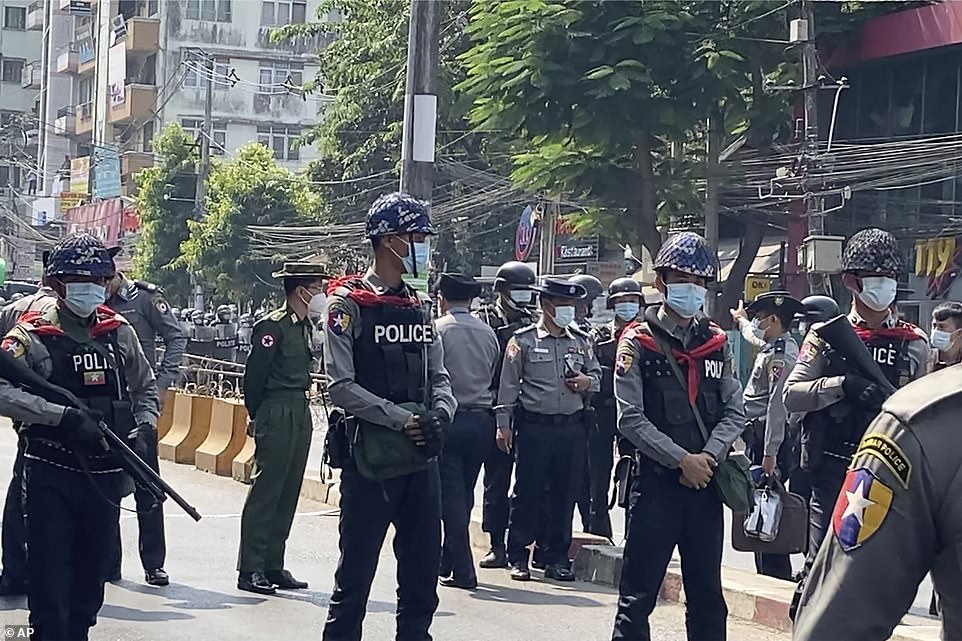 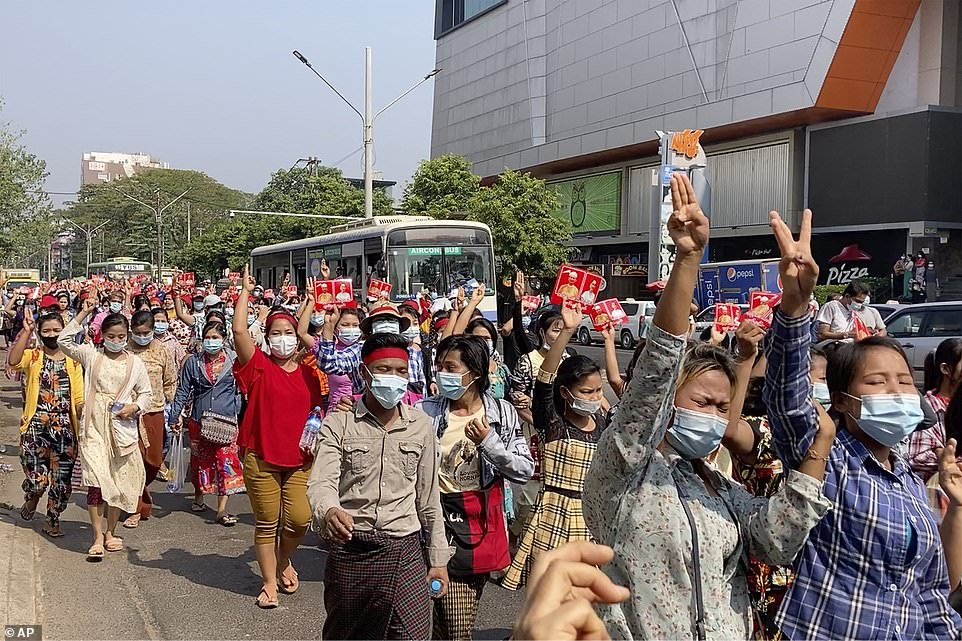 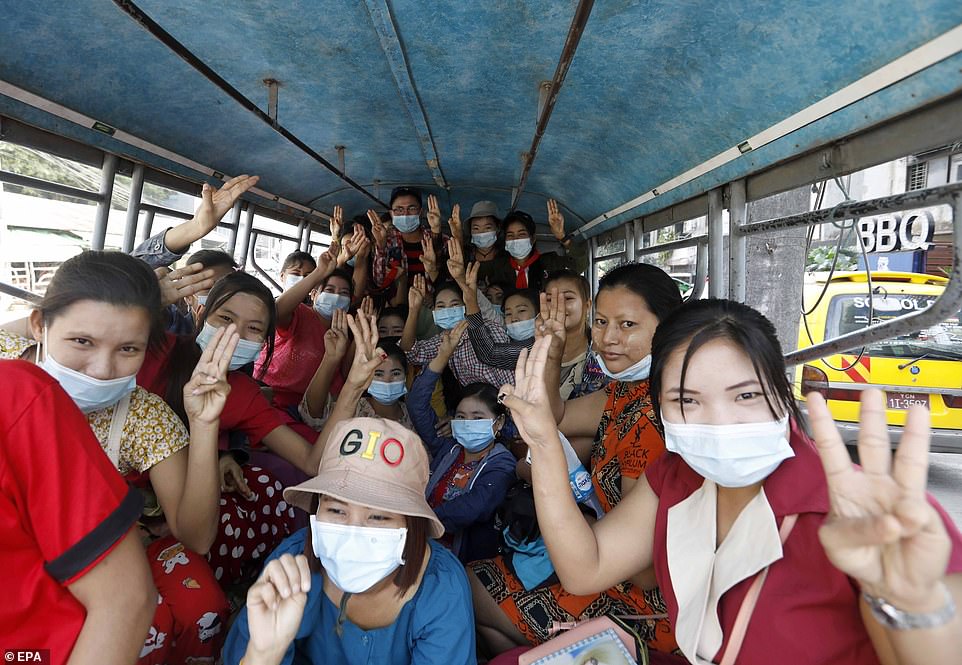 ‘People in Myanmar have been forced into a situation of abject uncertainty,’ said Ming Yu Hah of Amnesty.

‘An expanded internet shutdown will put them at greater risk of more egregious human rights violations at the hands of the military,’ she added.

An immensely popular figure despite a tarnished reputation in the West, Suu Kyi has not been seen in public since the coup, but a party spokesman said Friday she was under house arrest and ‘in good health’.

US President Joe Biden was among world leaders this week to demand the generals ‘relinquish power… release advocates and activists and officials they have detained, lift the restrictions in telecommunications, and refrain from violence’. 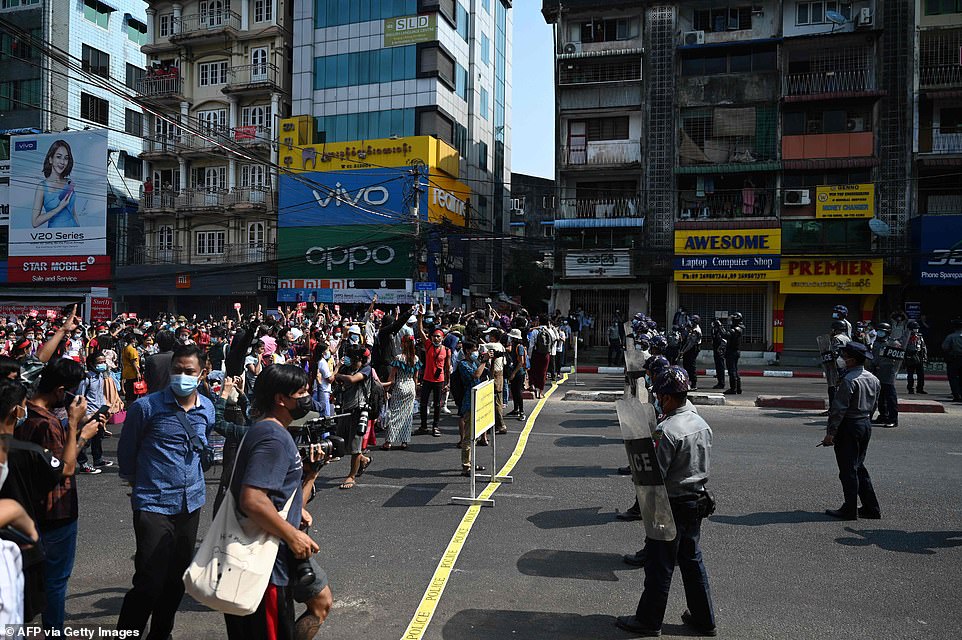 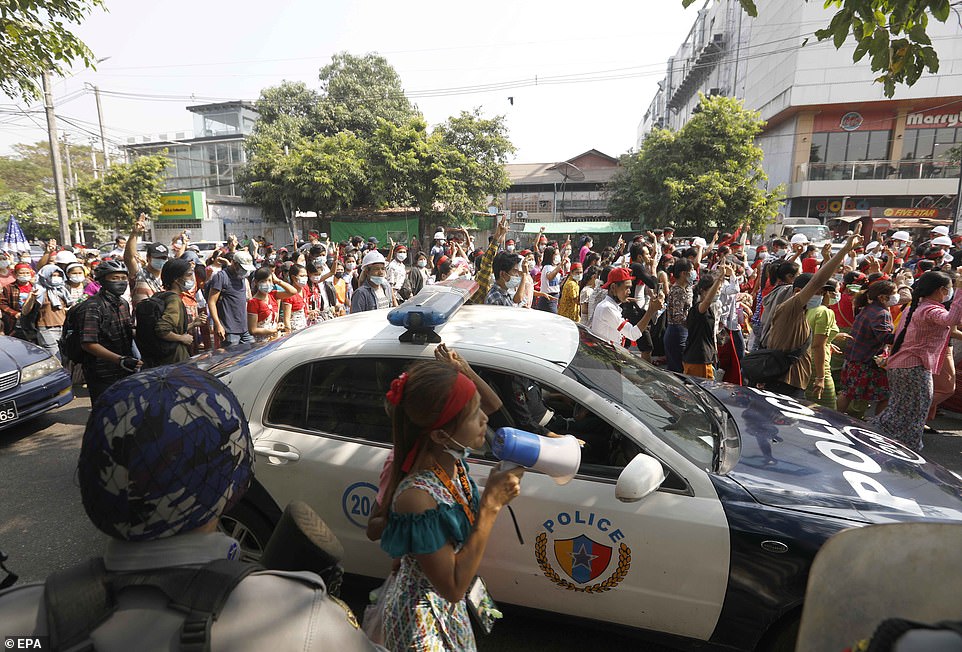 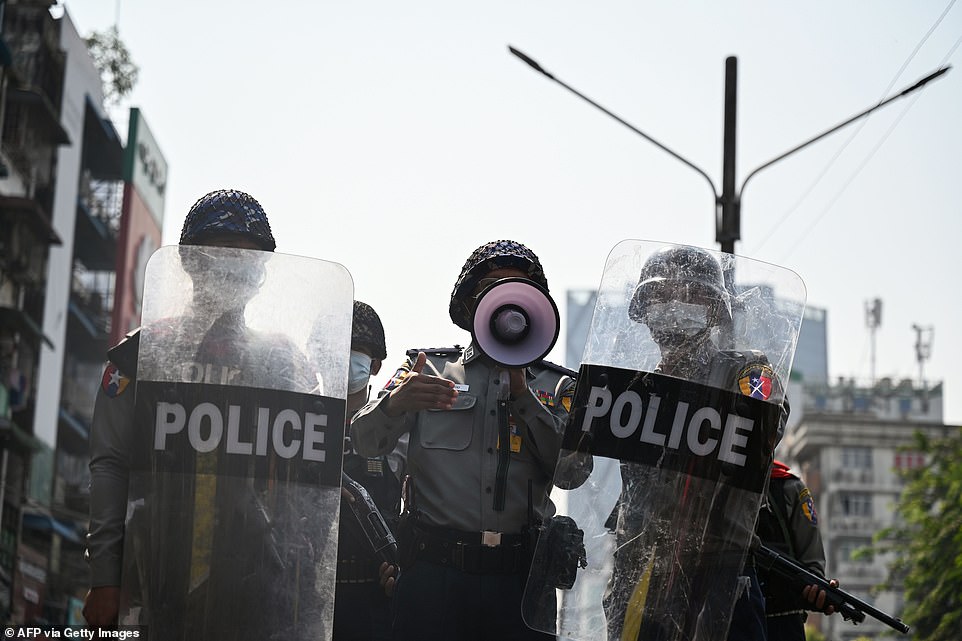 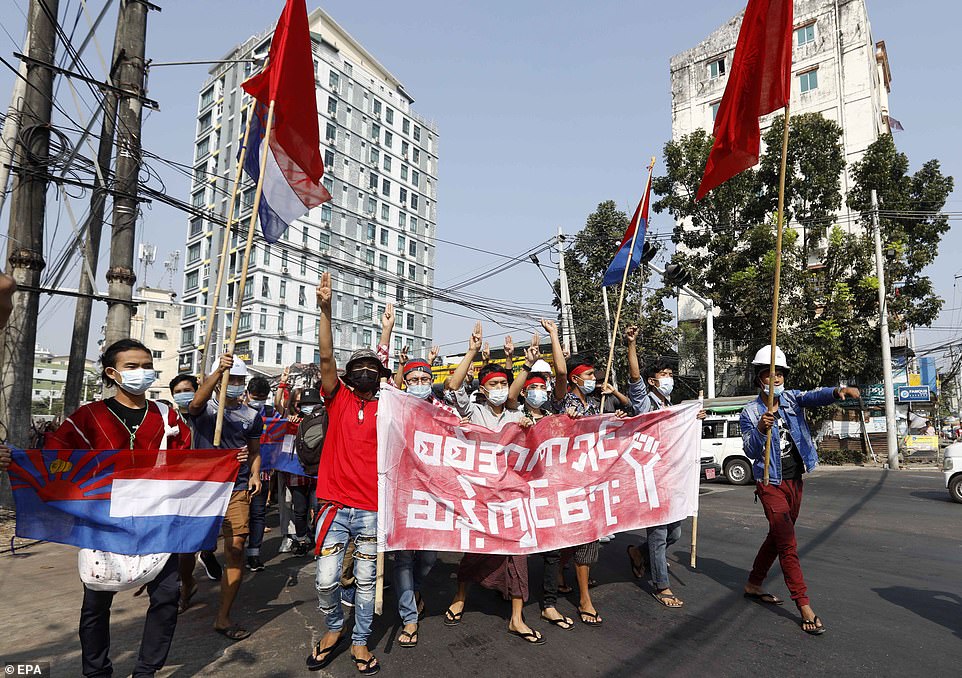 rotesters flash the three-finger salute, a symbol of resistance, and hold a large banner reading ‘Resist the military’ as they demonstrate against the military coup in Yangon

Aung San Suu Kyi was born under British rule in what was then Burma to General Aung San, one of the heroes of the country’s fight for independence.

General San was assassinated in 1948, while Ms Suu Kyi was just two years old and shortly before the country gained independence.

In 1960 – two years before the country entered full dictatorship – she left her home country for India, where her mother had been appointed ambassador in Delhi. 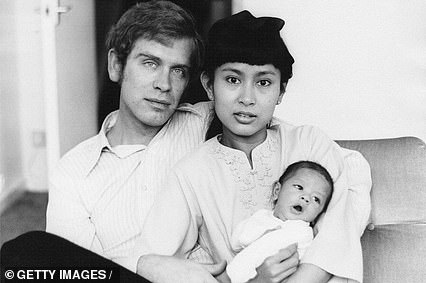 An historian who lectured on Bhutanese, Tibetan and Himalayan culture and history, Ms Suu Kyi married Aris in a Buddhist ceremony in 1972.

Ms Suu Kyi spent some time after the wedding living and working in Japan and Bhutan, where Aris was private tutor to the monarch’s children, before the couple settled in the UK to raise their own children – Alexander and Kim.

In 1988, Ms Suu Kyi returned to her home country – at first to tend to her critically-ill mother, but soon became embroiled in pro-democracy protests after the country’s military ruler General Ne Win stepped down.

Placed under house arrest in 1989, the military held elections the following year which Ms Suu Kyi won – though they decided to ignore the result.

She was kept under house arrest for the next six years, during which time she was awarded the Nobel Peace Prize, before being freed in 1995 – though kept under strict travel restrictions and bans on speaking to media.

Ms Suu Kyi last saw her husband that same year, before he died from prostate cancer in Oxford in 1999.

Over the next decade she continued to press for democratic reform of Myanmar while spending time in and out of house arrest – and was locked up during the country’s first elections in 2010.

In 2012 she won a seat as an MP and was sworn in as leader of the opposition. Her party won power in 2015, and while she became defacto leader of the country she was banned from the official role because her children are British.

General Min Aung Hlaing, commander-in-chief of Myanmar’s military, is now the country’s leader after being handed control of the government using powers embedded in the constitution.

Born in 1956 in then-Burma as the son of a civil engineer, Hlaing studied law at the Rangoon Arts and Science University – where classmates remembered him as a reserved student with little interest in politics.

While fellow students joined demonstrations, Hlaing made annual applications to join the premier military university, the Defence Services Academy (DSA), succeeding on his third attempt in 1974. 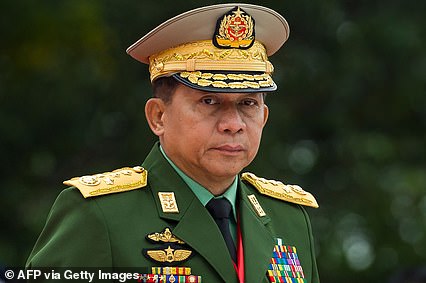 General Min Aung Hlaing, who is now the country’s ruler after a coup against the government

According to a member of his DSA class he was an average cadet.

‘He was promoted regularly and slowly,’ said the classmate, adding that he had been surprised to see Hlaing rise beyond the officer corps’ middle ranks.

In fact, Hlaing took over the running of the military in 2011 as Myanmar’s transition to democracy began.

By the onset of Suu Kyi’s first term in 2016, he had transformed himself from a soldier into a politician – using a popular Facebook page to promote his activities and meetings with dignitaries.

Hlaing studied other political transitions, diplomats and observers said, and has made much of the need to avoid the chaos seen in Libya and other Middle Eastern countries after regime change in 2011.

Hlaing extended his term at the helm of the military for another five years in February 2016, a step that surprised observers who expected him to step aside that year during a regular army leadership reshuffle.

He has been opposed to reforming the country’s constitution which handed the military a 25 per cent share of seats and bars Suu Kyi from holding power directly.

He was also one of the military leaders sanctioned in 2019 for a crackdown on Rohingya Muslims that was widely condemned as genocide.

Hlaing was facing forced retirement from the military this year and had been eyeing up a career in politics as a way to remain in power, analysts said, and may have now concluded that a coup is his only chance to hang on.